Why Judy Chicago Still Fights for Feminist Art at 75 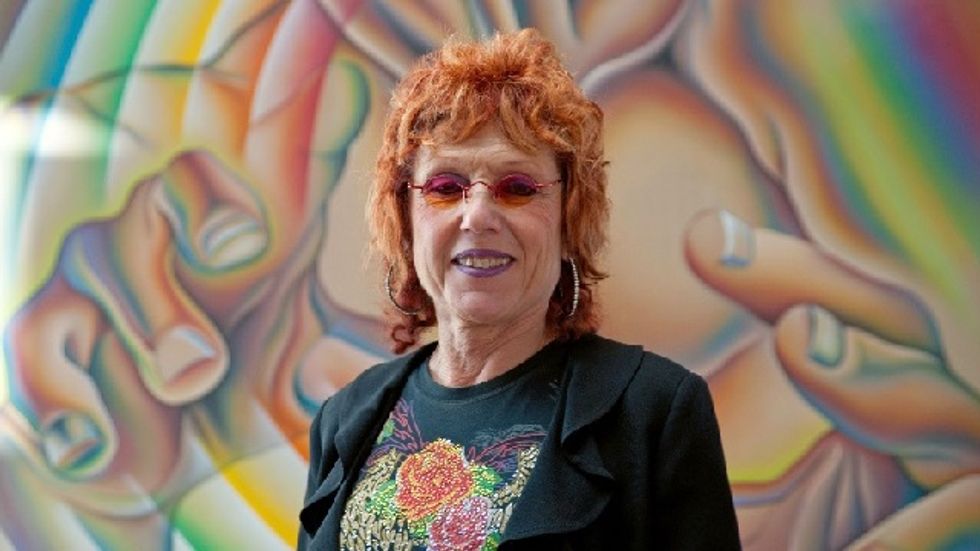 Chicago native Judy Cohen Gerowitz became Judy Chicago in 1970 for many reasons. One was to throw off her father’s and husband’s names and the male dominance behind that practice. Another, as shown in the now famous Jerry McMillan photo announcing her breakout exhibition at California State University, Fullerton, was to prove her willingness to fight for her rights, as shown by her donning boxing gloves, entering a ring, and staring down the camera with a pugilist’s “eye of the tiger.” Nearly half a century later, Judy Chicago’s still fighting in the public arena for hers and every woman’s rights to equality both of artistic expression and full expression of their humanity. Set to celebrate her 75th birthday this July, Judy Chicago (shown above) finds herself the subject of numerous retrospective shows.  But never one to rest on her laurels, Chicago also comes out swinging with not one but two books that not only look back at her achievements as an artist and educator, but also point forward to how the feminist fight rages on and what winning the next rounds and, ultimately, the battle for equality will involve.

Judypalooza heats up this summer, but some events have already begun. Judy Chicago: Circa 75: A Tribute to Judy Chicago, Long Gallery runs at the National Museum of Women in the Arts in Washington, DC, through April 13, 2014. Surveying Judy Chicago: Five Decades appears at the Palmer Museum of Art in University Park, PA, through May 11, 2014. Challenge Yourself: Judy Chicago’s Studio Art Pedagogy challenges you to get to the Eberly Family Special Collections Library in University Park, PA, before June 13, 2014. Nyehaus Presents The Very Best of Judy Chicago at Mana Contemporary in Jersey City, NJ, closes August 1, 2014. Judy Chicago: Through the Archives appears at The Schlesinger Library at Radcliffe College in Cambridge, MA, until September 30, 2014.

However, the really big Judy show opens on April 4, 2014 at Elizabeth A. Sackler Center for Feminist Art at the Brooklyn Museum in Brooklyn, NY. CHICAGO IN LA: Judy Chicago's Early Work 1963-1974, which will run through September 28, 2014, examines the road to Chicago’s The Dinner Party, her best known work that finally found a permanent home at the Sackler Center in 2007. And just to prove that the Chicago tour reaches from coast to coast, Local Color: Judy Chicago in New Mexico 1984-2014 runs at the New Mexico Museum of Art in Santa Fe, NM, from June 6, through December 31, 2014. (For all the other events that I’ve missed, check out the artist’s website for a venue possibly near you.)

The epicenter of this Chicago summer and Chicago’s entire career will always be The Dinner Party. Chicago’s new book, The Dinner Party: Restoring Women to History (with essays by Judy Chicago, Frances Borzello, and Jane F. Gerhard) serves as a kind of user’s manual to that iconic work of feminist art that once inspired an 87-minute debate in the U.S. House of Representatives over whether it was art or pornography. In this new book, Chicago explains in exquisite detail the art work surrounding the 1,038 women’s names memorialized by The Dinner Party and how the art expresses the fight for women’s rights from antiquity to today. The three wings of The Dinner Party each feature 13 women symbolized by an individualized plate and table runner in a feminized reimagining of The Last Supper. On the floor itself are 999 additional women’s names grouped thematically near one of the 39 women represented on the tables. As Chicago explains, the first plates are relatively flat, with “gradual reliefing of the plate surface” serving as “a visual metaphor” for “[w]omen’s intensifying resistance to the constriction of their liberties and rights.” By the time you get to the third wing featuring figures “from the American Revolution to the Women’s Revolution,” the plates are uncontrollably and individually three dimensional and the table runners burst out of their rectangular restrictions, just as the issue of women’s rights burst out beyond patriarchy’s control. I found myself dipping here and there into vast sea of recovered women’s history, learning about Omeciuatl the goddess from the oldest Mexican creation myths or Caroline Herschel, sister of the more famous William Hershel and “the first woman in science to receive recognition for her academic work and research.” The massive scale of academic work and research that went into The Dinner Party returns in fascinating and illuminating detail through this important book.

Chicago always stressed that The Dinner Party was both a collaborative and an educational project. Every worker, whether a ceramicist or textile worker, took part in researching the history of the women they were celebrating, making, in Chicago’s words, “the studio… a center of education, consciousness raising, and art production.” Chicago’s concern over education and consciousness raising continues in her other new book, Institutional Time: A Critique of Studio Art Education. Chicago believes that, “[d]espite the ever-growing and substantial body of research attesting to the existence of many important women artists (past and present), most university art and art history curricula continue to be male-dominated.” Even the increased number of women in such institutions “has not always translated into real change.” Chicago calls for a “content-based pedagogy” as opposed to “the prevalent approach to studio art, which focuses on form, materials, techniques, and often professional socialization—that is, how to make it in the art world.” By focusing on how to make art and how to play the game of becoming an artist, Chicago believes that the content of art, specifically content drawn from and relevant to the female experience, takes on a secondary importance or, worse, disappears entirely.

Chicago credits her upbringing in a home where voicing your opinions wasn’t just welcome, it was mandatory. Likewise, Chicago demanded that her female students both speak about their concerns and put those concerns into their art. Initially, Chicago even became “scared to death of what I’d unleashed,” but eventually she recognized that the forcefulness of their expression came in response to the power of the previous repression. Throughout, Chicago maintained her role as a “tough love” facilitator rather than an authority figure, setting the wheels of revolution rolling and then getting out of the way. Reading Chicago’s litany of adventures and misadventures in the academic world.

Although I fully believe that Chicago’s approach to art education was home grown, I can’t help but ignore the parallels to the ideas of Paolo Freire, the Brazilian educational philosopher whose Pedagogy of the Oppressed revolutionized modern educational thought. Although Chicago includes Freire’s book (which was written in 1968 and published in English in 1970) in her selected bibliography but never cites him by name in her text, Freire’s liberating spirit smiles down on her work. Chicago does cite educational thinkers operating in the wake of Freire, such as Elliot Eisner and bell hooks, whose study of the intersection of gender, race, and class inspired Chicago to widen her pedagogy beyond women’s issues to other issues of oppression, such as the rarely discussed issue of rape of males by females. Although women’s rights will always be Chicago’s main concern, the violation of human rights in any form will find a place in her pedagogy. As Chicago points out, the fact that “[h]igh tuition fees often make art school a place of privilege,” raises the possibility that people of lower economic classes might be priced out of the chance to express their experiences and voice their concerns—one more example of oppression reinforced by the current system of making art and artists. Even those art students who find success in the international art market (to which “art schools act as a feeding system”) run the risk of stagnation as the market favors art in line with the status quo rather than art, as the tag line for one of Chicago’s college shows ran, that can “evoke, invoke, provoke.”

After all these years, what does Judy Chicago want? Why does she still fight well into her eighth decade of life? “As the editors of Bitch magazine once suggested,” Chicago writes, “we will live in a post-feminist world when we achieve a state of post-patriarchy, a goal that is nowhere near being achieved, at least not in large parts of the world. Until that time, it might be a good idea to stop promulgating such a BIG LIE.” Just as Barack Obama’s presidency didn’t end racism, The Dinner Party’s canonization didn’t end sexism. To think otherwise is to delude ourselves and others. Judy Chicago fears that too many women today have bought into that big lie and fail to fight on for their rights. Always the facilitator and the educator as well as the artist, Judy Chicago’s final battle is to inspire others to take up the fight she and others fought for so long, or else their struggles and sacrifices would be in vain. Chicago couldn’t ask for a better birthday present than to see today’s artists jump into the ring she did over 40 years ago.

[Many thanks to The Monacelli Press for providing me with press materials and review copies of Institutional Time: A Critique of Studio Art Education by Judy Chicago and The Dinner Party: Restoring Women to History by Judy Chicago, with essays by Judy Chicago, Frances Borzello, and Jane F. Gerhard.]