Vivian Maier and the Hidden History of Women’s Photography 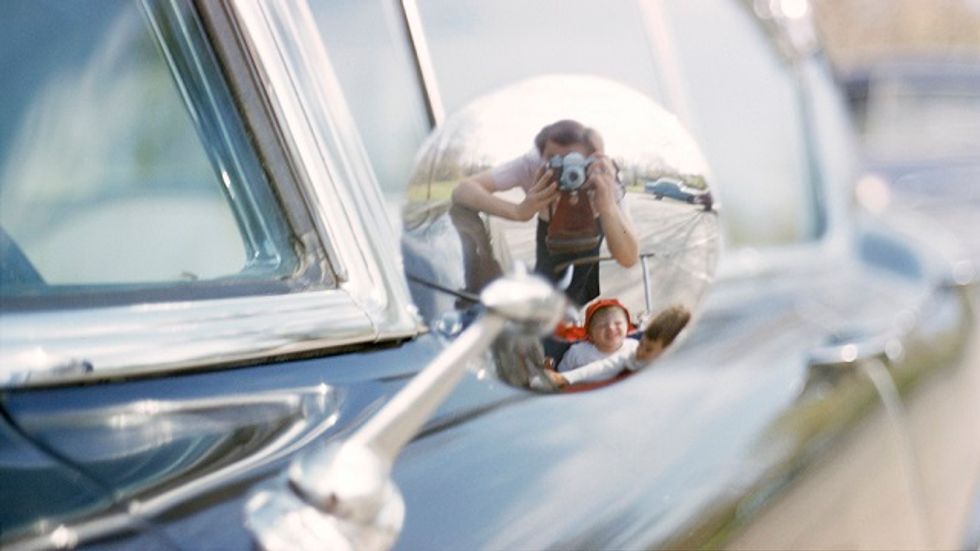 Vivian Maier took about 150,000 pictures during her lifetime, but never showed a single one to another living soul. When she died in April 2009, Vivian was remembered as a beloved nanny by the then-grown children who rescued her from homelessness and took care of her in her later years. Maier’s collection of negatives (most of which were never printed) was already being scattered to the winds after she failed to pay rent on her storage unit two years earlier. Thanks to filmmaker and street photographer John Maloof, who bought some of the negatives while researching another project, Vivian Maier’s photographs have been seen for the first time by the public and recognized as some of the finest street images taken by an American photographer, male or female, of the 20th century. In Vivian Maier: Self-Portraits, Maloof continues the rediscovery of Maier’s work, but this time focusing on her unique, enigmatic self-portraits. Vivian Maier’s story is more than just the story of a single, almost-lost photographer, but also the story of the hidden history of women’s photography and women’s art itself.

Maloof didn’t plan on discovering a new artist when he purchased a box of old negatives at auction in 2007. The most he hoped for were a few images showing the history of the Chicago neighborhood where he grew up. Once he began looking at Maier’s photographs, however, he discovered he had stumbled across much, much more. Eventually, Maloof tracked down the other negatives purchased by different buyers. Five years later, he’s reconstructed roughly 90% of Maier’s archive, but many dates and other details surrounding Maier’s work will never be determined. “Without the creator to reveal her motives and her craft,” Maloof writes in his foreword to the book of Maier’s self-portraits, “we are left to piece together the life and intent of an artist based on scraps of evidence, with no way to gain definitive answers.” The mystery of Vivian Maier only adds to the mystique of the photos.

Born in the Bronx on February 1, 1926, Vivian spent most of her young life in France. By the time she was 4 years old, Vivian’s parents had split and she was living with her mother and Jeanne Bertrand, a woman portrait photographer who most likely taught Vivian the trade. Maier first began taking photographs in 1949 with a clunky Kodak Brownie box camera. When she returned to the United States and settled in New York City in 1951, Vivian began working as a nanny and caregiver while taking photos of street life on the side. She continued that dual life when she moved to Chicago in 1956. Although her living arrangements in Chicago included her own private bathroom that doubled as a dark room for her to make prints, many of her negatives piled up over the years unprinted. As far as we know today, at no point did she share her photographs with anyone. Never marrying and never having any close friends, Maier continued taking photographs well into the 1990s, when financial troubles forced her to stop. Vivian slipped on an icy Chicago street in 2008, never recovering from and finally succumbing to her injury the next year.

Because Maloof’s interest is in street photography, his first book of Maier’s work, Vivian Maier: Street Photographer, emphasized that aspect of her photography. Without realizing it, Maier captured the look of many aspects of New York and Chicago street life of the 1950s that might otherwise have been lost to the ravages of time. (You can see examples at these six links.) That archaeological aspect of Maier’s work certainly has value, but it’s in this second book, Vivian Maier: Self-Portraits, that the creativity and unique aesthetic of this artist really come across. As Elizabeth Avedon writes in her essay, “Self-Portrait: My Impressions of Vivian Maier,” “The strength of Maier’s character is found in the persona looking back at us. There is little compromise; and ironically for such a private, autonomous person, her self-portraits are some of her strongest work so far.”

There’s a bit of a “Where’s Waldo?” aspect to much of Maier’s self-portraiture. Rarely do we see her directly. Often she’s there second hand, reflected in a mirror or a reflective surface such as a window or polished metallic surface. Sometimes it’s just a small mirror that captures a fragment of her. Quite often Maier appears only as a shadowy silhouette stretching across the scene. Looking through this collection of self-portraits, it’s surprising how rarely she looks directly at the viewer, even in the remove of a reflection. Whereas self-portraiture is usually about self-revealing, Maier’s self-portraits tell us almost nothing about her. “No great emotion is expressed in these self-portraits, little drama, inquisitiveness rather than self-examination, composition over expressed emotion,” Avedon observes. “Vivian smiled if she could, though rarely, and seemed to live two different lives: her contradictory domestic life and personal, creative life. She saw the world through a skillful eye, but never trusted anyone to bear witness or audience to her work.” When you finally find Maier in the Undated self-portrait in a car’s side view mirror (shown above), you realize she’s taking it while pushing the children entrusted to her care in a stroller. The kids probably chalked up the pause in their walk to their nanny’s Mary Poppins-esque creative streak and never gave it a second thought. The result of that momentary delay, however, is a lasting emblem of Maier’s whole dual existence and solitary artistry even in the midst of others.

The ferocious silence of Maier’s biography compels the viewer to piece together some meaning from the pictures. Is a 1954 self-portrait showing Vivian’s face in a mirror in a shop window behind a cross-latticed gate the artist expressing a feeling of being an artist trapped in a woman’s body? Why does she take a 1955 self-portrait of her face full of energy and confidence in a circular, hand-held mirror (which reminded me somehow of William Hogarth’s circular self-portrait with his dog) but then look away, denying us any connection? Does Self-Portrait; October 18, 1953, New York, NY, in which she stands split in half shadow and half light, express anguish over her divided existence? Ultimately, none of these questions can be answered. Like Self-Portrait, May 5th, 1955, in which circular mirrors face one another on opposite walls and force Maier’s reflection to ping pong back and forth infinitely, these portraits become circular arguments—she feels this because her portraits look like this, but her portraits might look like this because we think she felt this. Around and around we go.

When we free ourselves from the compulsion for autobiography, the pictures take on a larger life of their own. Maier’s gift for composition shines through in a fascinating parallel two shot between her long shadow and a series of connected puddles whose jagged edge resembles a volatile stock market graphic. Thus, the inner volatility of even the quietest exterior finds visual form. In a 1954 self-portrait taken on a beach, Maier captures a horseshoe crab within her shadow’s silhouette like a crustacean heart. “I should have been a pair of ragged claws/ Scuttling across the floors of silent seas,” T.S. Eliot wrote in The Love Song of J. Alfred Prufrock. But whereas Eliot’s poem speaks of sad alienation, Maier’s photographs speak of strength in solitude. The Love Song of Vivian Maier resounds with her love for photography itself. Avedon recognizes in Maier’s photography an “underlying intransigence… A chronic state of tension from which Vivian may have only found relief by focusing on photography—walking, observing, shooting, traveling—as though she constantly said to herself, just keep moving.” Like that horseshoe crab, Maier just kept scuttling along, year after year, photo after photo, even when she knew she’d never seen them printed and would never hear them praised. Photography, that modern “instant” art devolved into the “selfie” today, provided the perfect means of expression for Maier, who made up for in intelligence and vision what she lacked in formal training, like so many other women in the history of art who bumped up against the restrictions imposed on their sex.

“The work sings with photographic purity,” Avedon continues, “the love for physically making pictures. There is no place or use for a witness or collaborator, remaining uncluttered and free from the pursuits of acceptance, notoriety, and celebrity.” If there’s tragedy in Maier’s lack of recognition during her lifetime, it’s our tragedy, not hers. She didn’t need an audience to keep working, making her art even nobler and purer and society’s limitations of what is art and who can make it even sadder and crueler. Actually, an audience may have influenced her and even made her stop. In Vivian Maier: Self-Portraits, Vivian Maier finally finds her audience, but one that can’t tarnish the purity of her work. In that work lies the hidden history of women’s art—expression for expression’s sake, despite all the odds. How many other Vivian Maiers remain out there, waiting to be found? How many more will never be found? As Vivian Maier’s self-portraits prove, the loss is not theirs, but ours.

[Many thanks to powerHouse Books for providing me with the image above and a review copy of Vivian Maier: Self-Portraits, photographs by Vivian Maier, edited by John Maloof, essay by Elizabeth Avedon.]