Separating Michelangelo the Man and Artist from the Myth 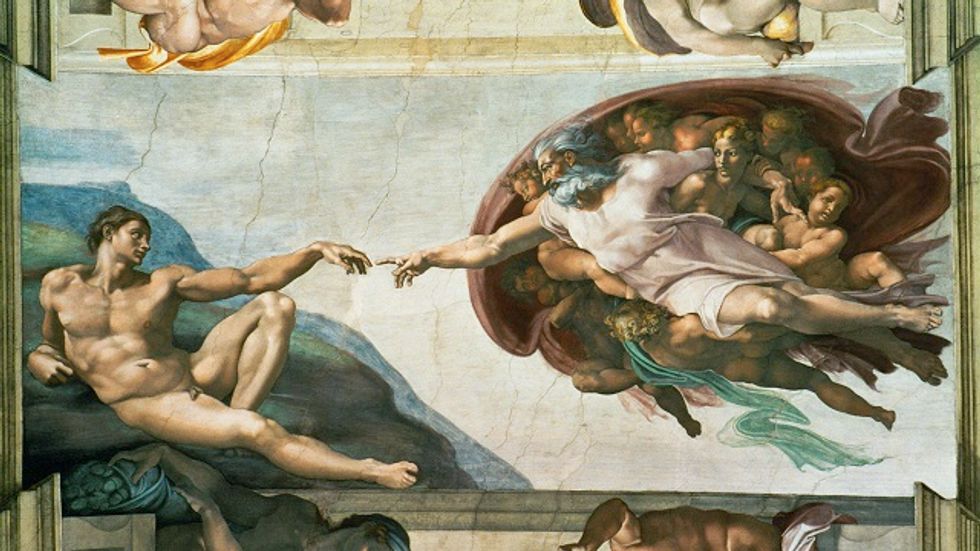 Five hundred years ago today, Michelangelo unveiled The Sistine Chapel Ceiling to Pope Julius II. The next day, All Saints’ Day 1512, the Pope inaugurated the newly decorated chapel with grand pomp and circumstance. With half a millennium between us and that momentous debut, it’s hard to imagine what went through the minds and hearts of those who first viewed perhaps the greatest single work of art in human history. They discovered Michelangelo’s greatness that day in a way we may be incapable of today, mired in the myth of Michelangelo. In William E. Wallace’s Discovering Michelangelo, a renowned Michelangelo expert guides us through the masterpieces, zooming in on fine details and sharing now-ancient stories to bring forth Michelangelo the man and giving us that chance to discover the artist with new eyes.

Discovering Michelangelo helps focus the mind of the viewer on the act of discovery by using die-cut windows and overlay pages to put the fine details of a work under Wallace’s critical microscope. Wallace’s Michelangelo: The Complete Sculpture, Painting, Architecture remains my go-to Michelangelo reference shelf book, so I had high hopes for this new, slightly differently targeted book. Discovering Michelangelo met and exceeded my expectations for a book that would not only introduce the artist to new audience, but also re-introduce works to those who thought they knew them but never knew how little they really knew. Step into Dr. Wallace’s classroom and be prepared to learn, no matter who you are.

Before diving into the stories of the art itself, Wallace first gives us Michelangelo’s story. Calling Michelangelo “one of the best-documented artists of all time,” Wallace explains how this “wealth of information offers a fresh perspective on his life and relations with family, friends, patrons, and professional associates. In contrast to the romantic conception of the artist as a lone genius, contemporary scholars tend to view Michelangelo’s life and work within a broad historical and social context.” Whereas previous scholars tended to tear the artist from his time, Wallace follows the contemporary trend of putting Michelangelo in his proper place, where he shines brighter than ever with no risk of getting lost in the Renaissance crowd. Wallace’s short biography of Michelangelo provides just enough information for a neophyte to hit the ground running when it comes to the images, while whetting your appetite for learning more. Unashamedly affectionate for his subject, Wallace twins Michelangelo the artist and aristocrat in a way that makes him unforgettably royal.

When you finally get to the art itself, arranged in chronological order to show Michelangelo’s growth, the humanity of the work is unmistakable. Wallace’s wealth of anecdotes adds layers of human interest to these spiritually charged, otherworldly pieces. I’ve looked at the Pietà countless times and even seen it in person, but I’d never noticed the horizontal line scored into the Virgin Mary’s forehead, which, as Wallace points out, “coincide[ed] with the edge of shadow cast by her wimple-like head covering” thus allowing “the light to suggest the presence of a thin, translucent veil” sculpted out of solid marble. Michelangelo’s Risen Christ takes on a whole new feel when you learn from Wallace that contemporaries admired this savior’s sublime knees, with Sebastiano del Piombo remarking that “the knees of the Risen Christ are worth all of Rome.” Such tiny tidbits quickly amass into a mountain of information serving as a tribute to the artist as much as to the scholar.

In addition to the content of the book, Wallace’s writing itself will entertain and inspire. Writing of The Creation of Adam from The Sistine Chapel Ceiling, Wallace muses, “Never has the second commandment—not to make any likeness of God—been so obviously and successfully contradicted.” “As God created man,” Wallace offers, “so has Michelangelo boldly invented God from his how imagination. Godlike, the artist forged the image of the deity for all western Christianity.” Even when Michelangelo played God in creating the “face” of God, Wallace manages to bring that higher power down to a human level, albeit the rarely attained level of Michelangelo. In the end, the message of Discovering Michelangelo is that we can discover in Michelangelo’s art aspects of his creativity, his boldness, his passion, and his faith in ourselves.

[Many thanks to Rizzoli USA for providing me with a review copy of Discovering Michelangelo by William E. Wallace.]