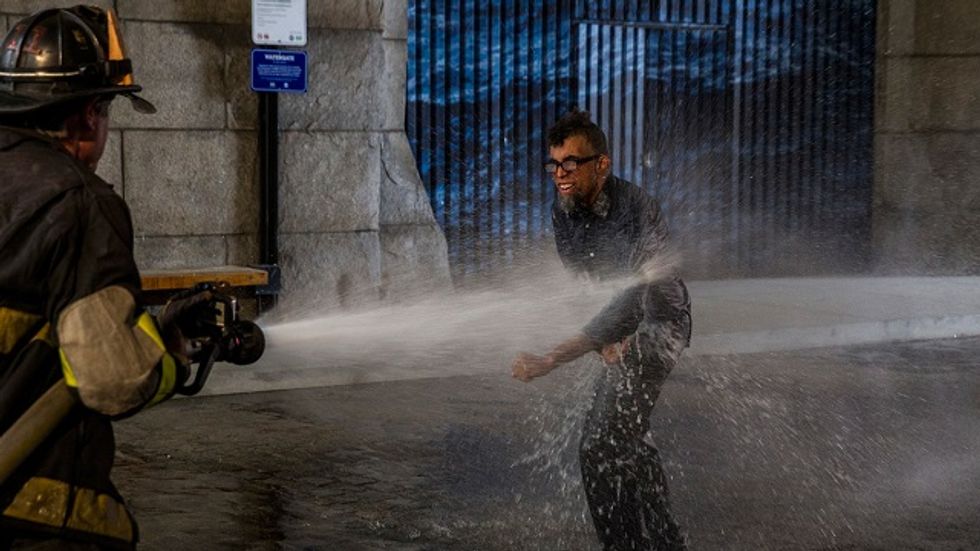 “War is simply a continuation of political intercourse, with the addition of other means,” Carl von Clausewitz wrote in his famous book on battle strategy, On War. Many misquote that saying more pithily as “War is politics by other means,” but the idea that politics plays out on different battlefields remains true. Several recent performance pieces responding to political issues in America make a case for performance art as politics by other means, too. From Dread Scott's performance On the Impossibility of Freedom in a Country Founded on Slavery and Genocide (shown above) tackling the long history and sad continuation of racism in America to Emma Sulkowicz’s Mattress Performance: Carry That Weight challenging America, especially American colleges, to address the issue of rape, performance artists are creating powerfully direct pieces that visualize and humanize sometimes faceless and forgotten issues.

The biggest complaints about performance art usually center on relevance and relatability. Performance art can often be too smart for its own good, literally shrinking the potential audience conceptually before the show even starts. Take, for example, the Guggenheim’s upcoming series of performance art performances collected under the title “Blood Makes Noise.” Leading off “this series of intimate performances explor[ing] the interrelations between corporeal presence, sculptural objects, and sonic space,” Lesley Flanigan plays “on minimal electronic instruments she builds from speakers and microphones” to “accumulate[] layers of feedback and vocalization to create a physical field of noise.” Next, Holly Herndon “map[s] a sonic territory that hovers between bodily experience and the virtual realm of computer technology,” before Naama Tsabar ends by “challeng[ing] conventions of museum display while drawing on a range of cultural references, from Post-Minimalist art to arena rock music.”

Let me first say that I, personally, would love to watch these artists in “Blood Makes Noise,” but I’ll be the first to admit that I may not be the typical audience member. Part of the problem in selling such performances lies in the hyperbolic excesses of typical “artspeak,” that MFA-driven argot of art intelligentsia, but a bigger part rests in the near-total absence of topical interest in “the interrelations between corporeal presence, sculptural objects, and sonic space.” Why are such shows being staged right now and right here? Bottom line—why should we care? The powerfully political and timely topical performance art that’s recently hit the headlines may not satisfy critical appetites, but it feeds a more populist, more general hunger for art that addresses the right now and the right here.

In On the Impossibility of Freedom in a Country Founded on Slavery and Genocide, performance artists Dread Scott restaged the iconic imagery of the 1963 Civil Rights conflicts in Birmingham, Alabama, when the infamous "Bull" Connor ordered high-powered fire hoses and attack dogs to be set upon the peaceful African-American protesters. The pictures capturing those acts soon spread across the country and the world, essentially guilting the American government into passing the Civil Rights Act of 1964 one year later. In Dread Scott’s version, retired firefighter John Riker trains a fire hose (set to a lower pressure for safety) on the artist as he attempts to walk forward with hands raised in surrender—another allusion, but this time to the shooting of Michael Brown and resulting civil unrest in Ferguson, Missouri (shown above; more photos of the performance can be seen here). Dread Scott’s performance was in collaboration with More Art, an organization committed not only to making art accessible to the New York City community, but also to making art focusing on social engagement.

Even Dread Scott’s name alludes to America’s troubled racial past by referencing the Dred Scott of the notorious “Dred Scott Decision” that tightened the grip of slavery on American democracy and contributed to the eventual Civil War. But the artist puns on the first name by accentuating the “dread” in the “Dred Scott Decision” and suggesting that African-Americans still dread many aspects of life in America a century and a half after the end of slavery. Scott’s targeted other types of inequality in America beyond race. In 2010’s Money to Burn, Scott occupied Wall Street and began burning small bills while encouraging others to follow suit. “The transgressive act of burning my own money alluded to the absurdity of a system based on profit,” the artist explained. “It’s crazy to burn money but it is the height of rationality to have a market where billions can vanish.” The cruel irony of history repeating itself, whether it be racial frictions or bank bailouts, isn’t lost on Scott and drives the interest behind his performances.

Similarly, Columbia University studio art major Emma Sulkowicz’s Mattress Performance: Carry That Weight captures the interest of a broad audience in a way that most art fails to do today. The victim of a sexual assault in her own dorm room bed, Sulkowicz decided at the beginning of the fall semester to carry her mattress around until the man who raped her left Columbia’s campus. While moving a mattress over the summer break, Sulkowicz “thought about how I was raped in my own bed at Columbia; and how the mattress represents a private place where a lot of your intimate life happens; and how I have brought my life out in front for the public to see; and the act of bringing something private and intimate out into the public mirrors the way my life has been.”

The fact that Columbia’s administration failed to discipline Sulkowicz’s attacker and her performance piece soon became a larger discussion of the issue of sexual assault both in colleges and America in general. Her solo performance piece soon became part of a larger protest. Sulkowicz soon found others literally assisting her in her performance. As one of the ground rules for her piece, Sulkowicz refuses to ask for help carrying the mattress, but she will accept help from others who offer. Other women and men soon began to participate in Sulkowicz’s now weeks-long performance, eventually forming the student group “Carry The Weight Together.” Breaking the frightened silence of the victims and complicit silence of authorities, Sulkowicz’s performance piece has struck a chord that may finally change the culture that permits sexual assaults to happen and to go unpunished.

“I make revolutionary art to propel history forward,” Dread Scott begins his artist’s statement. This new kind of overtly political performance art by Scott, Sulkowicz, and others “propels history forward” by giving tangible form to the senselessly cyclical nature of American racial and sexual politics. Sulkowicz credits as influences pioneering performance artists Tehching Hsieh (whose works address enduring imprisonment and homelessness) and Chris Burden (whose 1975 piece titled simply Doomed addressed the essence of human compassion and its absence), so political performance art is nothing new. What sets these pieces and artists apart is a new willingness to make their art unashamedly political and to speak loud and clear (blessedly free of “artspeak”) to issues that concern not just specific groups but ultimately all of us. If artists stop making such art and we stop paying attention, then we may truly be doomed.

[Image: Dread Scott's performance On the Impossibility of Freedom in a Country Founded on Slavery and Genocide, which took place underneath the Manhattan bridge in DUMBO on Tuesday, October 7th. ©2014 Mark Von Holden/Mark Von Holden Photography. All Rights Reserved. Courtesy of More Art.]

[Many thanks to More Art for providing the image above.]