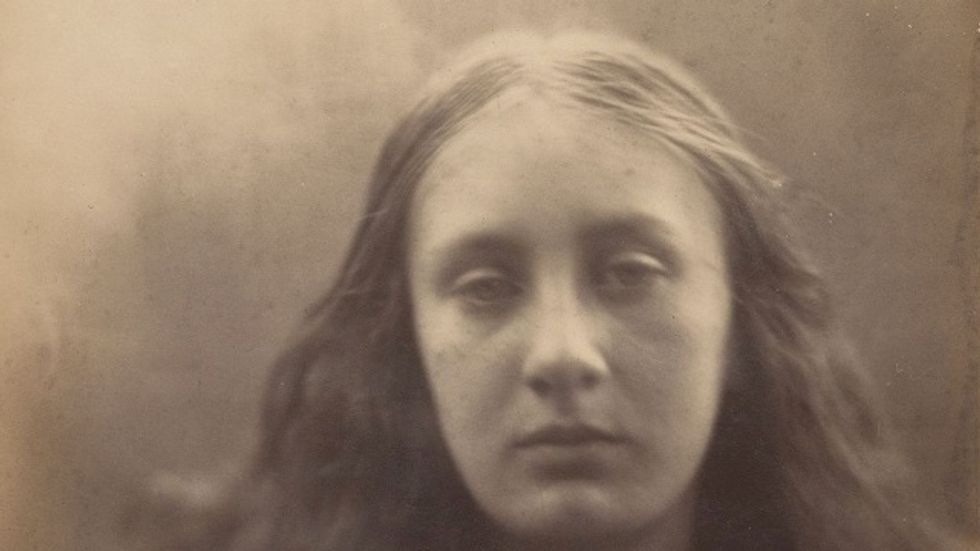 Born into a family of celebrated female beauty, Julia emerged as the ugly duckling. But she made up for any lacking in physical beauty with a vivacious energy infatuated with the idea of beauty itself in all forms. A constellation of celebrity—painters John Everett Millais and Edward Burne-Jones, paradigm-shifter Charles Darwin, and poets Robert Browning and Alfred Lord Tennyson, among many others—surrounded Cameron and formed an enviable social circle of subjects for her camera. Even those who resisted at first, such as author Thomas Carlyle, eventually succumbed to her gentle persuasion.  For many of these figures, Cameron’s photographs have become the iconic image of what they looked like in their Victorian prime.

Carlyle’s 1841 book On Heroes, Hero-Worship, and the Heroic in History, which postulates the “Great Man theory” of history that it is people and personalities that shape history (and not the other way around), finds its photographic companion in Cameron’s pictures. Cameron makes heroic figures such as Tennyson (her next door neighbor) seem larger than life by having their faces dominate the frame of the image. You get up close and personal with each individual. Put together, they form a veritable Victorian Mount Rushmore. As a photographer, Cameron chased down and captured beauty in all forms—literature, visual art, science—and raised them to the status of celebrity through photography in the same way that today’s visual forms such as film and television do today.

What makes Cameron truly fascinating isn’t just the way she presents the “Great Man,” but the way she also presents the “Great Woman,” no small feat in the still uptight, corseted time in which she worked.  In Christabel (from 1866; detail shown above), Cameron used the face of her niece, Emily Mary (May) Prinsep, to play the role of Samuel Taylor Coleridge’s poetic maiden held by the sway of evil sorcery. May’s beauty plays as much a part in her allure as the power behind her gaze, which holds yours that heartbeat longer than expected the same way that modern glamour photography, at its best, can. Cameron long suffered charges of amateurism for her unfocused photographs, as if the little lady didn’t know how to work her camera.  But that lack of focus was really part of Cameron’s intended effect.

“What is focus—and whop has a right to say what focus is the legitimate focus?” she wrote in a letter. Hoping to convey some of the life force of the subject, Cameron chose to resist the power of photography to present the facts and made greater use of its power to present the mythic. Cameron’s often lumped together, thanks to chronology and choice of subject matter, with the Pre-Raphaelite painters. Some Pre-Raphaelites, such as John Everett Millais, often drained their beautiful female subjects of individuality and life, drowning them like so many Ophelias in a nostalgic, almost fearful desire to restrain their female power. Other Pre-Raphaelites, such as Dante Gabriel Rossetti, overcorrected and painted overripe Lady Liliths whose female power bursts uncontrollably from the canvas. Both directions denied the essential humanity—the greatness within—of these woman in the same way that Victorian social and sexual mores did. In a subtly feminist way, Cameron photographed her woman with a combination of fact and fiction that told us of the exterior and interior of their lives. I’m reminded of the diffusion disks used to soften Cybill Shepherd’s features for the 1980s television show Moonlighting. Critics cast aspersions on Shepherd’s denial of her own aging, but, in retrospect, the altering of her image now reminds me of Cameron’s technique. I’m so much more than a pretty face, the illusion suggests, that I’ll make you conscious of its prettiness (real or not) to prove my point.

When you look at Cameron’s portraits of another niece, Julia Jackson Duckworth, eerily similar in many ways to the niece in Christabel, you can read a similar strength in her eyes that burns through the mistiness of the soft focus. Those eyes are the eyes of the mother of Virginia Woolf, the most perceptive writer of her time. Virginia helped edit Cameron’s photographs years later, preserving them for future generations, probably recognizing how they not only point back to their time, but also point to the future, especially the future of women. In the photograph titled Pomona, the name of the Roman goddess of abundance, Cameron photographed 24-year-old Alice Liddell, whose 7-year-old self infatuated Charles Dodgson (aka, Lewis Carroll) to write the classic Alice's Adventures in Wonderland and to take a series of photographs that disturb us today for teetering on the edge of child pornography. Cameron shows little Alice all grown up, hand on hip and unsmiling expression challenging rather than submitting to the lens and the viewer. Alice Liddell remains one of the “It girls” of the Victorian age, for good or ill, but Cameron’s photograph erases the objectification that Dodgson’s embraces. Cameron made women goddesses to fear or respect, not pretty dolls to look at or exploit.

David S. Shield’s Still: American Silent Motion Picture Photography argues that silent film stills influenced the course of modern glamour photography. Silent films certainly reached a larger audience than Cameron’s pictures ever did, so it’s natural that their influence is stronger. But look closely at Cameron’s photographs (especially the Arthurian settings staged to illustrate Tennyson’s Idylls of the King) and you feel the story behind them, a movie that you want to see. Julia Margaret Cameron makes you want to see more of the movie of her life and art and, more importantly, to immerse yourself in the aura of the people who live on glamorously in her work.

[Many thanks to the Metropolitan Museum of Art, New York, for providing me with the image above and other press materials related to Julia Margaret Cameron, which runs through January 5, 2014.]