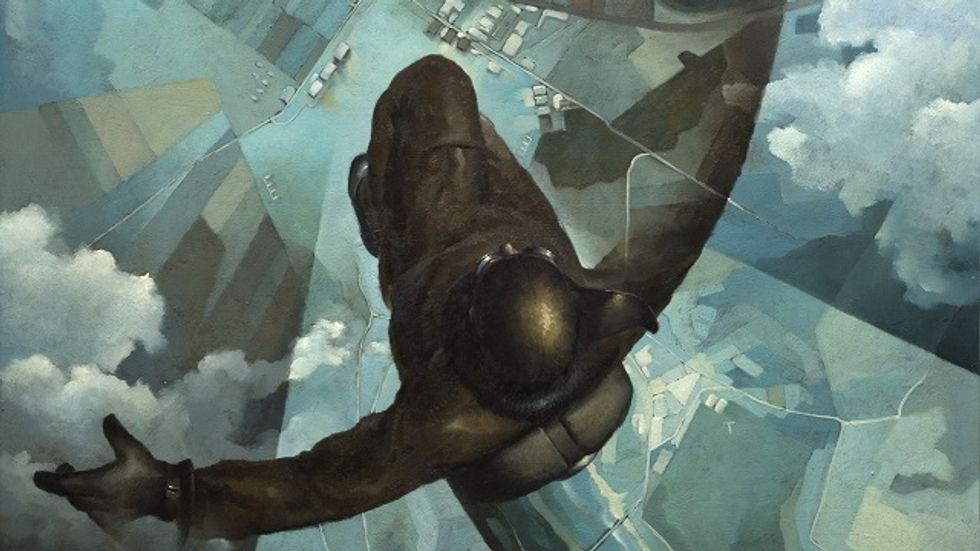 When people say that an art movement or school “died out,” they usually don’t mean it literally. In the case of the Italian Futurists, however, you can specify the day the movement “died”—August 17, 1916, the day that artist Umberto Boccioni succumbed to injuries at the age of 33 after falling from a horse and getting trampled during Italian Army cavalry training for World War I. Boccioni exemplified the best parts of an art movement that celebrated modern technology aesthetically. His death registers today as another senseless death among millions during the “Great War.” In a different sense, however, Italian Futurism “lived on” for another three decades and one more world war in the person of Filippo Tommaso Marinetti, the movement’s chief manifesto maker and warmonger. The Guggenheim Museum’s new exhibition Italian Futurism, 1909-1944: Reconstructing the Universe, which runs through September 1, 2014, resurrects the good, the bad, and the ugly truths of an art movement that died in the culture and wars of the past yet still lives on, zombie-like, in our modern ones. How did Italian Futurism become the undead art movement?

Marinetti's Manifesto of Futurism, published first in La gazzetta dell'Emilia on February 5, 1909 and then more (in)famously in the French daily Le Figaro two weeks later, kicked off the movement with a bang. You can read the whole thing in English translation here, but the money quotes from the beginning emphasized the new over the old and war as the driving force in art and life. “Museums: cemeteries!” Marinetti roared. “Museums: public dormitories where one lies forever beside hated or unknown beings. Museums: absurd abattoirs of painters and sculptors ferociously slaughtering each other with color-blows and line-blows, the length of the fought-over walls!” Instead, “Art, in fact, can be nothing but violence, cruelty, and injustice.” The Futurists “affirm[ed] that the world’s magnificence has been enriched by a new beauty: the beauty of speed.” And where were the Futurists speeding off to? In a word, war. “We will glorify war—the world’s only hygiene—militarism, patriotism, the destructive gesture of freedom-bringers, beautiful ideas worth dying for, and scorn for woman,” Marinetti announced brashly. “We will destroy the museums, libraries, academies of every kind, will fight moralism, feminism, every opportunistic or utilitarian cowardice.” Against the perceived threat of the past (and even new ideas such as feminism way back in 1909), Marinetti called for war as a cleansing “hygiene.” Add some fervent pre-World War I nationalism, find some like-minded young artists such as Boccioni, stir well, and you have the perfect recipe for an art movement—perhaps not an enduring art movement, but that was never their goal.

In addition to Boccioni, painters such as Giacomo Balla, Gino Severini, and Carlo Carrà soon joined the group, as well as composer Luigi Russolo. From the very beginning, Boccioni produced the best work, including 1910’s The City Rises, which shows manual laborers struggling to control a powerful red horse rearing up—a metaphor for the powerful technology quickly slipping from human control. In 1911, Severini visited Paris and met Pablo Picasso, Georges Braque, and other then-Cubists. When Severini brought Cubist ideas back to Italy, the Futurists grafted those ideas onto their own, resulting in perhaps the single best Futurist work—Boccioni’s 1913 sculpture Unique Forms of Continuity in Space. Unique Forms captures their fascination with speed, gives physical form to the Cubist idea of seeing from all sides at once, and still manages to retain the human in the face of dehumanizing technology. Alas, the Cubist-Futurist merger resulted in some cute works, such as Balla's 1912 works, the self-explanatory Dynamism of a Dog on a Leash and Rhythm of the Bow (which tries to depict a violinist’s hand in action), but little matching the weight of Boccioni’s sculpture.

For such a politically charged movement, the Italian Futurists were at first more talk than action outside of making art. A notable exception is Carrà’s 1910-1911 painting Funeral of the Anarchist Galli, but even that depicted a political riot that Carrà witnessed in 1904. In fall 1913, Marinetti published a political manifesto pleading the Italian people not to reelect long-standing Prime Minister of Italy Giovanni Giolitti, a left-leaning politician who worked hard to create a centrist coalition that could resist the political extremes of both the left and the right—exactly the kind of man Marinetti and the Futurists deplored. Giolitti the sensible lost in 1914, just one of the warning signs of trouble to come. The Futurists leapt feet first into the fray that would become the First World War when Boccioni tore the Austrian flag while sitting in the balcony of Milan’s Teatro dal Verme as Marinetti waved the Italian one—a symbolic act of aggression against the Austro-Hungarian Empire’s control of parts of Italy. One dead Archduke Ferdinand later, the nationalist dominoes began to fall and the Great War was on, with Italy entering officially in 1915. The Futurists enthusiastically enlisted in the war they celebrated and proceeded to lose their enthusiasm and their lives before war’s end in 1918.

Marinetti, who saw the First World War as a correspondent but not as a combatant, didn’t let the slaughter of a generation cool his enthusiasm for modern warfare via technology. Unlike most retrospectives of the Italian Futurists that focused on the pre-World War I or “heroic” phase of the movement, the Guggenheim’s Italian Futurism, 1909-1944: Reconstructing the Universe examines this less heroic afterlife of the movement that stretched from the Great War’s end to the Marinetti’s death in 1944. In presenting more than 360 works by more than 80 artists, architects, designers, photographers, and writers, the Guggenheim show demonstrates how Futurism became a multimedia phenomenon as its influence spread disproportionally to its ability to make great art aside from that of Boccioni. The primary reason for this focus on “heroic” Futurism is Marinetti’s and the movement’s merger with Italian Fascism. Ever the manifestoist, Marinetti published the founding document of the Futurist Political Party in 1918, before the bodies of the dead were even cold. A year later, Marinetti joined with Benito Mussolini's Fasci Italiani di Combattimento and later became one of the first affiliates of the Italian Fascist Party. Over the next 20 years, Mussolini, Marinetti, and Italy moved closer and closer to the Second World War. Amazingly, Marinetti took a bad idea and made it worse by dealing with the Fascist devils, yet it lived on like an undead zombie thanks to a combination of Marinetti’s personal charisma and the instability of the interwar years in Europe making the people more receptive to anyone who sounded like they knew what they were doing.

The most striking development in Futurism during the interwar years was the new penchant for the power of modern planes. These paintings of modern flight came to be known as aeropittura, launched, of course, by a manifesto titled Perspectives of Flight, signed by, of course, Marinetti, among others. Perhaps the best examples of aeropittura came from the brush of Tullio Crali. Crali’s Before the Parachute Opens (Prima che si apra il paracadute) (detail shown above) depicts an Italian paratrooper descending like a bird of prey upon the landscape below. The headiness of this “god’s eye view” thrilled Crali and others. Crali actually knew how to fly a plane, which lends a sense of realism to his works. Crali’s best known work, 1939’s Nose Dive on the City, however, leaves me with a sick feeling, and not from airsickness. To me, Nose Dive on the City feels like looking at Pablo Picasso’s Guernica from the bomber’s perspective. Most people remember that the April 26, 1937, aerial bombing of the innocent citizens of Guernica involved the German Luftwaffe’s “Condor Legion,” but few remember that the Italian Fascist Aviazione Legionaria also flew in what was then called “Operation Rügen.” You only see buildings and no people in Nose Dive on the City, as perhaps the flyers over Guernica did, but you have to know that people are down there. The question then becomes, “Do you care?” Futurism’s careless caress of modern means of mass murder makes its persistence even more puzzling.

Despite being in his sixties, Marinetti volunteered to fight for Italy in the Second World War. He died of a heart attack on December 2, 1944, leaving behind an uncompleted collection of poems in praise of the Italian military. The Guggenheim show stops with Marinetti’s death, yet even his departure for that great manifesto in the sky didn’t stop Futurism. Crali, the mad bomber in paint, trudged on, the latest zombie master looking for brains to consume with his influence. Fascism being unfashionable after World War II, Crali nonetheless kept the Futurist flame alive for years. Finally, in 1959, Crali finally broke down and, of course, published the first post-World Wars Futurist manifesto, titled Sassintesi or “Stone Syntheses” in English. Just as the Cold War powers threatened to nuke humanity back to the Stone Age, Crali suggested that the future of Futurism was an embrace of timeless natural materials such as pebbles, stones, and rocks. When Sassintesi-style minimalism failed to catch on, Crali attempted to revive aeropittura for the jet-propelled age of the 1960s, but that, too, seemed like just an odd, old uncle to the new kid on the block—Pop Art and Roy Lichtenstein’s comic take on the aeropittura aesthetic, 1963’s Whaam!

When Crali died in 2000, you would have expected Futurism to fall into the grave beside him, but no such luck. Thanks to Marinetti’s international efforts to interact with artists beyond Italy’s borders, Futurism, at least in its unapologetic theoretical bomb throwing, influenced Surrealism and Dada, both of which inform so much artistic practice today in our post-Duchamp world. But, aside from the contemporary art world, Futurism’s fundamental tenets still live on, undead, in our culture through its fascination with technology and, sadly, its capacity for destruction. The only difference between Crali’s paintings from the 1930s and video of drone strikes today is improved technology, both to kill and to document the killing. Italian Futurism, 1909-1944: Reconstructing the Universe reconstructs the universe that the Italian Futurists arose from and later shaped as well as their peculiar persistence despite the contrary belief that civilization’s evolved past Marinetti’s thrill to kill. In going back to the Futurists, the Guggenheim offers a “back to the future” teachable moment proving that everything old is new again, that some things do never change, and that just because an idea is bad, it doesn’t mean it will die.

[Many thanks to the Guggenheim Museum in New York City for the image above from and press materials related to the exhibition Italian Futurism, 1909-1944: Reconstructing the Universe, which runs through September 1, 2014.]