How the Impressionists Dressed for Success 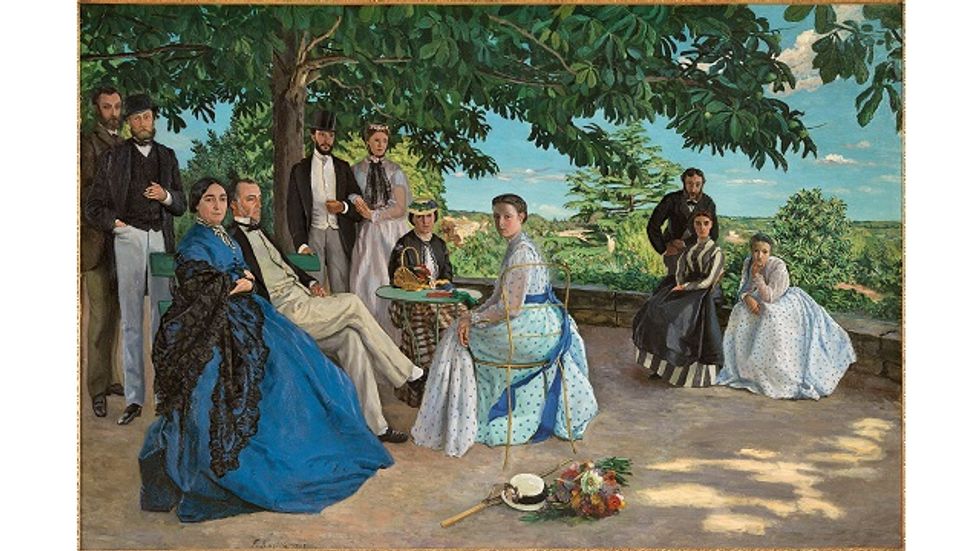 “The latest fashion... is absolutely necessary for a painting,” artist Édouard Manet announced in 1881. “It’s what matters most.” When most people think of Impressionism, they may think of flowers, haystacks, water lilies, dancers, and even nude bathers, but rarely of haute couture caught on canvas. Impressionism, Fashion, and Modernity, which runs at the Metropolitan Museum of Art in New York City through May 27, 2013, focuses on how Impressionists from the 1860s through the 1880s depicted the latest fashions as a sign of a new spirit and freedom—the same spirit and freedom that led to their then-radical art movement. As Manet suggested, in many ways, showing the latest fashions in art was what mattered most. For modern audiences who tend to look past the clothes to the people and things, Impressionism, Fashion, and Modernity reminds us of how the Impressionists “dressed” for success.

Fashion as we know it today started just around the same time the Impressionists began working. Paris emerged as the style capital of the world first in the mid-1860s as new innovations such as the department store, Prêt-à-Porter (i.e., ready-to-wear) clothing, and the fashion magazine created and catered to a public appetite for fashionable wear. As the exhibit’s press release points out, “those at the forefront of the avant-garde—from Manet, Monet, and Renoir to Baudelaire, Mallarmé, and Zola—turned a fresh eye to contemporary dress, embracing la mode as the harbinger of la modernité.”

The exhibition gathers together a greatest hits of Impressionism on fashion: Monet’s Luncheon on the Grass (1865–66; not to be confused with Manet’s version, which isn’t in the show) and Camille (1866), Renoir’s Lise (Woman with Umbrella) (1867), Manet’s La Parisienne (circa 1875), Gustave Caillebotte’s Paris Street; Rainy Day (1877), Edgar Degas’s The Millinery Shop (circa 1882–86), and Mary Cassatt's In the Loge (1878). Surrounding these paintings (loaned from 40 international museums and one-third of which appear in New York City for the first time), the curators place examples from the Met’s Costume Institute of the actual dresses, skirts, coats, hats, shoes, walking sticks, and parasols that appear in the paintings. Contemporary photographs, fashion illustrations, and fashion journals on display complete the illusion that you’re right there walking amidst the fashionable set.

But as you look at the works, you often get the sense of being looked back at. The well-dressed figures in Jean-Frédéric Bazille’s 1867 painting Family Reunion (shown above) challenge you with their collective gaze. We are the next generation, they silently say with their eyes, the generation without kings and queens to bow before. Zola congratulated his friend Bazille upon seeing Family Reunion. You can be “an artist by painting a frock coat,” Zola remarked, recognizing that the new rightful subject matter of the new art form was the new fashion modern-thinking individuals wore not just as a trendy item, but as a badge of honor.

When this exhibition ran in Paris at the Musée d’Orsay, they titled it simply Impressionism and Fashion. By adding “modernity,” the Met makes the challenge embedded in this exhibition obvious. First, we see the challenge posed originally by the Impressionists and their fashionable subjects to the status quo. But, secondly, these fashion forward artists and individuals challenge us today—the inheritors of this modern sense of individuality. Do we still use fashion as a statement of independence? Or do we simply wear corporate logos and mass produced wear like mindless sheep? Impressionism, Fashion, and Modernity manages to make us see both Impressionism and the origins of high fashion in a new light that also illuminates our modern relationship to both art and clothing in a fascinating and thought-provoking way.

[Many thanks to the Metropolitan Museum of Art in New York City for providing me with the image above and other press materials related to Impressionism, Fashion, and Modernity, which runs through May 27, 2013.]