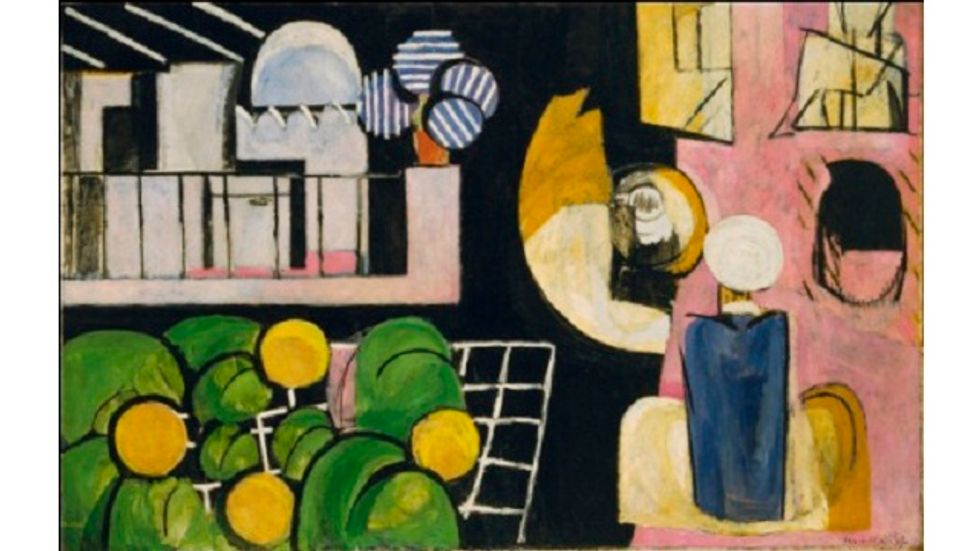 In chemistry, a free radical is the name for an atom or group of atoms having at least one unpaired electron, thus making it unstable and highly reactive. From the time after his return to Paris from Morocco in 1913 to his departure to Nice in 1917, Henri Matisse lived like a human free radical, flourishing in instability and reacting to everything around him, as if driven by some unpaired aspect of his artistic self longing to find its match. Matisse: Radical Invention, 1913-1917, which runs at the MoMA through October 11, 2010, examines this period of radical invention and reinvention of one of modern art’s main figures. Thanks to new innovations in technology, we can delve into the paintings themselves to reconstruct Matisse’s means of constructing his art and piece together the thought processes that marked this wild time of experimentation.

“Matisse sometimes employed the term composition to suggest such an arrangement of parts; he used construction, however, to describe the production of a true compound in which the elements of a picture fit securely together like the parts of a house or human body,” co-curators Stephanie D'Alessandro of the Art Institute of Chicago and John Elderfield of the MoMA write in the catalogue. For Matisse, they explain, the “methods of modern construction” include “the lessons and legacy of Cezanne; the developments of the Paris avant-garde art world of the second decade of the twentieth century, and most especially Cubism; and… the practice of returning to and reworking his own art.” Picasso may reign as the prime magpie of modernism, but Matisse lands a close second, as shown in this exhibition. “For Matisse,” D'Alessandro and Elderfield continue, “this period was one of experimentation and flux as much as any solid sense of definition and unity. It was, in fact, his radical, unbridled, and ambitious invention, rather than any formal characteristic or subject, that defined his efforts.” Amazingly, Matisse flourished in the uncertainty surrounding his efforts, challenged rather than stymied by the lack of structure, which paralleled the uncertainty of the time itself, when Europe sent a whole generation to die in the trenches of World War I. “[I]t was because he was faced by the awful events of the war that Matisse became so acutely aware of pushing painting to the limits of what it could depict,” the co-curators conclude.

One of the more fascinating aspects of this exhibition and catalogue is the handling of Matisse’s relationship to Cubism. If you take Cubism as a monolithic, coherent style, then Matisse’s take on it seems incoherently messy. However, if you see a more nuanced and varied world of Cubism, as Matisse did, you will agree with the exhibition’s thesis that Matisse “was attracted to and practiced different Cubisms in a manner not so distant from some of those whom we call Cubists without qualification.” By leaping that hurdle, the exhibition finds clearer ground to examine just how freely Matisse roamed the modernist landscape.

Art historians today too often seem enamored with the gadgetry of ultraviolet illumination, infrared reflectography, and X-radiography, among other toys, leaving a befuddled public lost in the wake of a churning whitewater of jargon. In this exhibition and catalogue, however, the cutting edge technology works beautifully with the old school humanism and interest in the mind of the artist. For example, Matisse labored on the theme of Bathers by a River off and on between 1909 and 1917. When we see a fascinating digital recreation of Matisse’s 17 versions just from early spring through November 1916, that endless tinkering comes to life in a way that dry text cannot.

Similarly, Matisse conceived idea for The Moroccans (shown above) in 1912, worked on different versions from 1913 through 1916, but finally arrived at completed work by the end of 1916. The catalogue brings together drawings and details from the painting to illustrate the process of creation in images, while simultaneously gathering accounts from those who watched Matisse in action. “Together,” the catalogue authors write, “these accounts speak of transformation through transposition, of assembly aided by elimination, and of reduction leading to reworking, all of which brought about a new synthesis that was both decorative and firmly lodged in the perceptual world.” We really get a sense of the mad scientist Matisse at work in the laboratory of his studio, trying every trick at hand before announcing to the world that a work was “alive” in the way he imagined.

With 138 black and white and an astounding 515 color illustrations, the catalogue to the exhibition, Matisse: Radical Invention, 1913-1917 from Yale University Press pleases the eye as much as it challenges the mind. Nothing is left to the imagination except to put yourself in Matisse’s place as the eternal experimenter. Because of World War I’s interruption of public art exhibitions, it wasn’t until the 1930s that other artists discovered Matisse’s evolution during these years. Matisse: Radical Invention, 1913-1917 builds on that first rediscovery with modern technology and old-fashioned passion for understanding what makes a true artist rise to the challenge of becoming a master.