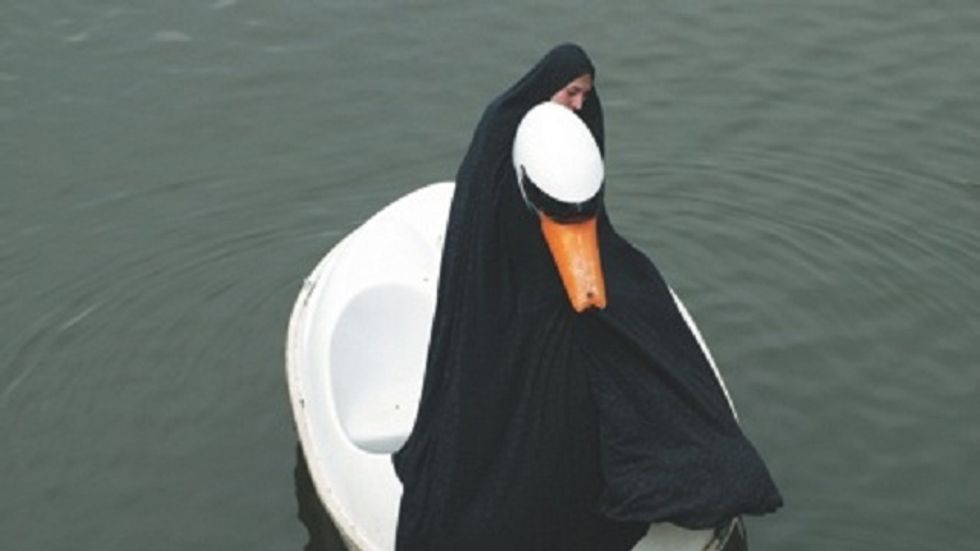 For Americans, the name Iran conjures certain key images—the Shah, the Revolution of 1979, the hostages, the Ayatollah Khomeini, and black chador-clad women. Worn as part of the Islamic code of hijab, the chador became a kind of visual symbol of the religious fundamentalism that took hold of Iran after the revolution. Filmmaker Robert Adanto’s new documentary Pearls on the Ocean Floor confronts and then strips away the clichés surrounding the chador through interviews with Iranian women artists. As in the fairy tale of the ugly duckling, a beautiful swan emerges from the darkness of this history in the body of work done by these courageous women artists.

For each of these woman artists, the revolution of 1979 marks the turning point in their life and art. Some lived in Iran at the time and felt the chill hand of repression claim their careers and lives until their escape. Others lived overseas when the revolution struck and found their roots literally cut from under them. Some younger artists profiled didn’t know or barely knew pre-revolutionary Iran and struggle to lay claim to a conflicted heritage. This variety of connections helps Adanto weave an intricate narrative of loss and remembrance.

Even the chador itself becomes a more complex entity than imagined. As Baroness Haleh Afshar explains, some see the chador as a way of obscuring female sexuality to allow the woman’s voice finally to be heard—a positive feminist stance that seems strange to Western eyes accustomed to feminist dress in the form of miniskirts. Artist-journalist Haleh Anvari grew up in “a chadori family” in which the women wore the chador “to enter the world, not to shy from it” and found individuality in colorful chadors that defy the dark cliché. Her photographs of women in colorful chadors vividly illustrate how Iranian women assert their personhood within the hijab code. By contrast, Parastou Forouhar’s 2004 Swanrider series (one of which is shown above) examines the dark chador directly by juxtaposing it against a white swan boat floating down a river. These photographs not only strike the eye, but also allude to multiple layers of allusion—from Hans Christian Anderson’s ugly duckling to the legend of Leda and the swan to even Lohengrin, an opera by Richard Wagner, one of the key composers of Germany, Forouhar’s adopted country after the politically motivated assassination of her parents, who paid dearly for imagining a more progressive post-revolutionary Iran.

Adanto, who previously promoted contemporary Chinese photographers and video artists in The Rising Tide, allows the women artists to be the stars of the show, making Pearls on the Ocean Floor a wonderful rescue mission in raising these “pearls” to public view. Unfamiliar names suddenly become artists you want to know more and more about. Mona Hakimi-Schueler’s series of self-portraits seems almost Frida Kahlo-esque in search of Iranian everywomanhood. Living under the American and Iranian flags, Sara Rahbar makes art out of the flag, confronting what those national identities truly mean. “I don’t want to be afraid to touch the flag,” Rahbar says in the film. “It’s mine.” Throughout the film, the women artists take hold of their world and make it theirs. Shadi Ghadirian’s Qajar portraits amusingly inject modern elements into old-fashioned staged photographic portraits of Iranian women to capture perfectly the clash of old and new the modern Iranian woman faces. Ghadirian touches on a nostalgia that Malekeh Nayiny places at the heart of her work. Nayiny’s “updates” of old family photos bring a colorful life to faded images that mimics the power of memory to resurrect emotional colors of the past.

Those are just a few of the memorable artists that Pearls on the Ocean Floor introduces to a wider audience. Here are women caught in a maelstrom of forces pulling on them—religious, sexual, political, and artistic. Their ability to keep themselves together and even to thrive under such conditions testifies to their power as individuals. Pearls on the Ocean Floor lifts the veil unjustly covering such powerful women and inspires the viewer to reexamine what they thought they knew about Iran and the black swans hidden beneath the infamous chador.

[Many thanks to RH Gallery for providing me with the image above and a review copy of the film Pearls on the Ocean Floor.]