Why Cleaning Is Not Always A Feminist Issue 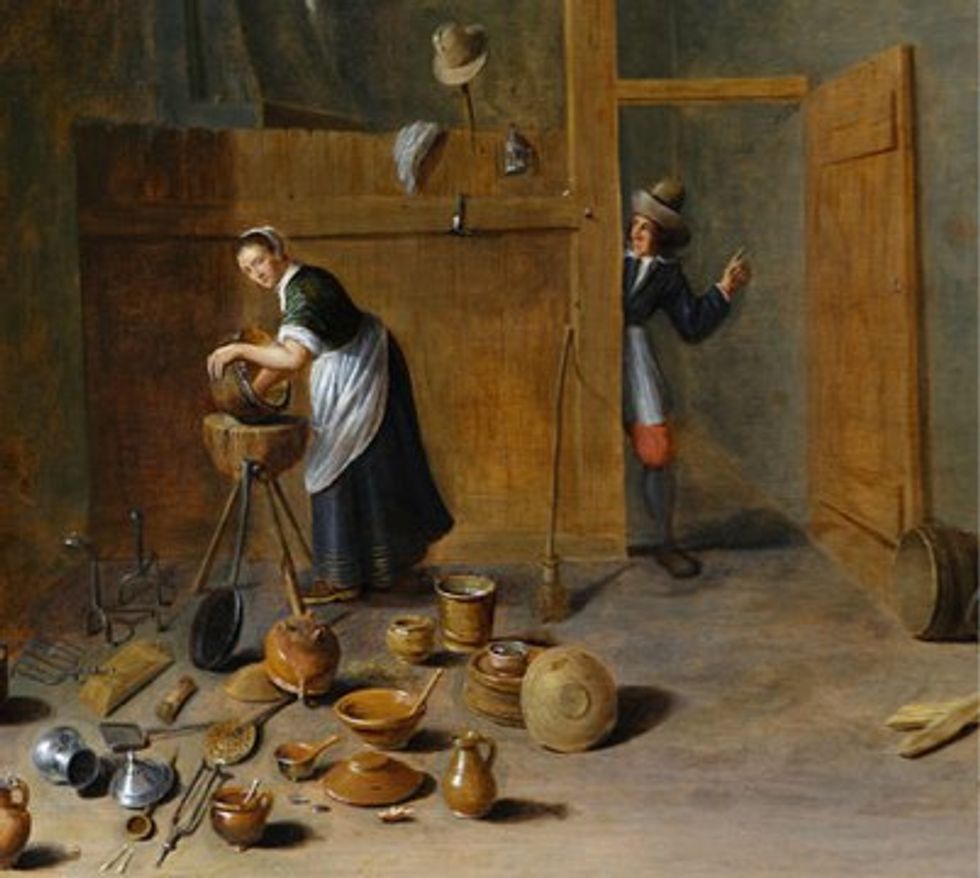 As recently as a decade ago, a common middle-class American interpretation of a father in a heterosexual couple was "Mom's assistant," as Louis C.K. called it. Parenting was a job defined by the mother, performed more or less correctly by the father, according to her specifications. Today, many of us have more or less replaced this notion with a real-partnership model. Our ideal parenting situation is closer to equal. That means the work is done according to standards that are sometimes shared, sometimes negotiated, sometimes grumblingly accepted because, well, it's not what I would do but that's how s/he does it. That is, after all, the only way forward to real gender equality in child-rearing. This revolution, though, does not extend to housework. As this week's media kerfuffle over cleaning (started by this TNR piece by Jessica Grose) made me realize, when it comes to non-parenting, non-cooking domestic chores, women in heterosexual partnerships seem to dream of a false, unequal sort of "equality."

Jonathan Chait nailed it Thursday in this post. If most men shared the standards of women for domestic order, he wrote, then "men who lived by themselves, or with other men, would have to keep their own homes tidy until they could conscript a wife or girlfriend to do their cleaning." They don't, of course. As Grose puts it, "there are no closet organizing tips in the pages of Esquire, no dishwasher detergent ads in the pages of GQ." Well, sure. Men don't care about such things. (Gross generalization, I know, but most of us would concede the majority is large, though we all know of exceptions.)

So the proposal than men split evenly the chores that women do in many homes, which sounds so reasonable and just, morphs into a proposal that men keep their homes exactly as women would like them. Grose begins her piece with a story about how she was tidying up her messy apartment before her father-in-law visited, even though neither her husband nor his father much cared what the place looked like. She thinks her husband should do more of that sort of thing. And if she wants to claim her home would be more civilized or sanitary if he did, that's fine. But because such a home would be one in which her word was final, she can't claim it would be more just.

I'd like to propose that domestic duties divide into three types. First, There are the things that both partners would do if alone, because life would be unbearable if they were undone. Storing food, cooking it, cleaning up afterwards, clearing away the dust bunnies before they suffocate the baby, that sort of thing.

Second, there are the things each partner does not because s/he cares but because the other does, except sometimes when tired or depressed or annoyed, you say to hell with it. For example, my wife tends to put CDs away after she's played them, because it drives me crazy to see loose CDs lying about, or to open a box to play one and find it empty. (Yes, we still have CDs. We did get rid of the cuneiform tablets, though.) She doesn't really care about this, but she cares about me. Similarly, I tend to pick up yesterday's clothes off the floor and put them in the laundry basket because she dislikes seeing them strewn on the floor. I don't really care about that, but I do about her feelings.

Then there is a third category of chore—the one that one partner would not do alone and finds both onerous and pointless, but which the other does. (Like cleaning up a house for a visitor who doesn't care, when one would rather take a nice walk, which is the situation that leads Grose's essay.) I would love it if my wife kept all her various passwords in one central database as I do, but digital tidiness is not her way. Conversely if she should happen to take some t-shirts of mine out of the drier, she will neatly fold them as if they were dress shirts. For me, there will always be something better to do with those minutes. A pile'o'shirts, clean and accessible, is fine, thanks.

Now, it's obvious that what is fair in a relationship is that both parties share Category 1 chores (maybe not 50-50 on each one, but in some equitable way). If you would do the work yourself but you slough it off on someone else, you're basically enslaving them. Category 2 chores are also important, reflecting not justice but love and esteem for one another. The point is beautifully explained here by Noah Berlatsky.

Category 3, though? If you tell me I have to do something that I feel is a waste of time, would never do, and don't care to see done, you're not striking a blow for gender equality. You're just imposing your vision of the world on another person. And if you want to do that, well, good luck. But don't call it fairness, or feminism.

Which is, pretty much, the response to be found in many men's posts that weighed in on this debate. That, in itself, is interesting. A decade ago, I think the intelligent middle class straight man's response to Grose's essay would have been apologetic acquiescence. Instead, there has been thoughtful pushback (each amusingly accompanied by anxious explanations of how domestically dutiful the writer is). Chait's was probably the most sensible: "the housework problem has a partial solution that’s simpler and more elegant," he wrote. "Do less of it."

That's pretty much the only fair solution. Do less—not as little as most male partners would do on their own, but not as much as most female partners would do on their own. Because, as with child care, a fair and loving partnership for chores is one in which both members explicitly and implicitly negotiate a shared environment—not one in which one gender sets the standard and the other measures up.