What's Behind Humanity's Strange Tolerance for the Deaths of Innocent People? 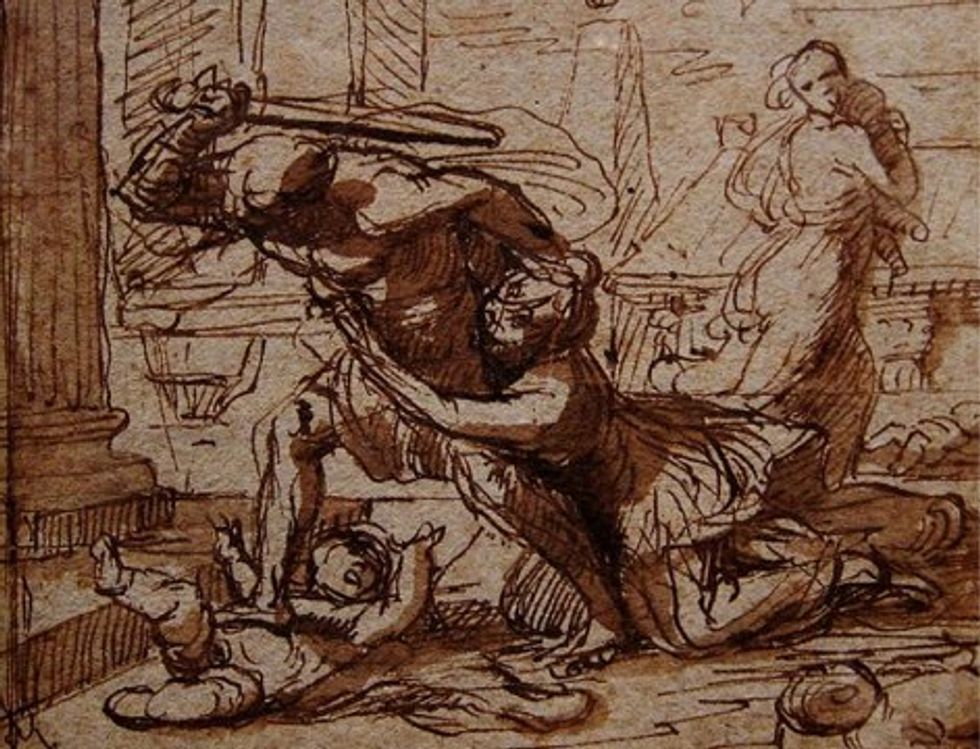 In my news feed the other day was a photo of an anguished boy holding an even smaller boy, killed by a shell. Another day in the war in Gaza. He was innocent, I think. No innocents should die! It feels like an absolute imperative. Yet even a minute's reflection reveals I am not consistent about this: The deaths of some innocents trouble me more than others. In 1999, NATO bombed Serbs in Belgrade for the deeds of Serbs in Kosovo, and the actions of a government for which not all victims (certainly not the 88 children killed) voted. During that campaign, I don't recall American media encouraging me to feel more than a twinge. Or, to take another example, of all the many waves of mass violence that have torn through Europe in the last century, one that has never troubled my sleep is the mass dispossession and displacement of ethnic Germans in eastern European countries at the end of World War II. Didn't the Germans sort of have it coming in 1945? But do I really believe that ethnic German toddlers in Poland in 1945 had it coming?

In fact, the more I examine my intuitions about innocence, the clearer it is that the concept is a nest of hierarchies, not a simple yes-or-no category. In standard news stories about violence, adults are not as innocent as children. And men are not as innocent as women. As the political scientist Adam Jones (whom I found via Noah Berlatsky) has pointed out, in media reports about violence, outrages committed on able-bodied men are just not ranked with violence against the old, the young and the female. (The very mention that women and children were victims implies that it wasn't so bad that men were also killed.) This sense that men have less innocence simply because they are men is also, of course, a staple of certain expressions of feminist rage (for instance, this movie).

This unspoken intuition—that people can fall down the hierarchy of innocence, or even out of it, because of who they are, not what they have done, can be woven into an explicit argument. The other day the essayist and law professor Thane Rosenbaum tried it, writing about Gaza. "On some basic level, "  wrote Rosenbaum (paywalled at the Wall Street Journal, but extensively quoted by Kia Makarechi here) "you forfeit your right to be called civilians when you freely elect members of a terrorist organization as statesmen, invite them to dinner with blood on their hands and allow them to set up shop in your living room as their base of operations." Quickly, Makarechi pointed out that Osama bin Laden had made the same argument, writing "the American people are the ones who choose their government by way of their own free will; a choice which stems from their agreement to its policies."

Repugnant, right? After all, we in the Western world (and certainly we legalistic, individualistic Americans) take it as a bedrock principle that it is wrong to hurt Paul for what Peter did. Yet we in the Western world (even Americans) often hold people responsible for the things they do, and the things they are, collectively. If Ivan is off fighting for separatism in eastern Ukraine, too bad for Ivanka in Vladivostok who is hurt by economic sanctions. Even though Tiffany doesn't have a racist bone in her body, she is part of the problem that white American poses for African-Americans. Even though Adam acts respectfully toward women, he gets treated with suspicion because of the sheer number of his fellow males who catcall, harass, assault and rape women. Do we want Ivanka and Tiffany and Adam to be able to claim they are "innocent"?

Some of us do. For them, harm to the innocent is can only be justified on utilitarian grounds: They suffer, even though they don't deserve to, because if they did not then more innocents would suffer. NATO bombed the Serbs to prevent genocidal acts in Kosovo. It wasn't out to hurt any particular mother or child. If you reject this argument completely, then you can't support any war, ever—not even one that would prevent mass slaughter, or end slavery. Most people would endorse the "greatest good for the greatest number" position, then, at least some of the time.

Yet this line of argument is often self-serving: It is those who inflict death who most often tell people on the receiving end that their suffering is a sad necessity. The other trouble is that this way of justifying harm does not match our moral intuitions. Those tell us that people can and should be held responsible for their shared acts as members of squads, corporations, nations, ethnic groups, religions and so on—that individual innocence cannot be the whole story.

In the past few decades, many philosophers and legal thinkers have tried to defend those intuitions about group responsibility. They don't want to let individual men off the hook for the systematic oppression of women. They don't want to let individual white Americans off the hook for the ongoing effects of racism on the lives of black people (hence, for example, Ta-Nehisi Coates' argument for reparations payments to African-Americans).

Here, for instance, the philosopher Linda Radzik recounts the story of a man who'd seen friends and family massacred by members of another ethnic group. "I know that not all of them were in on it," he said. "Not all of them have blood on their hands. But, you know, not one of them has come up to me and said, 'I'm sorry for what my people did.' " We intuitively grasp his grievance. If a philosophy of justice can't support it, Radzik argues, then it's that philosophy that is at fault.

How, then, should we decide how and when a collective misdeed robs an individual of at least some innocence? Can we replace our contrary hunches and inconsistent rules of thumb with some kind of a system? There are plenty of proposals in circulation In one, the political scientist Farid Abdel-Nour argues that when people have a high degree of identification with their community over time, they can be held morally responsible for events in which they didn't participate.

I wonder. Solidarity with the past is an emotional outlook that comes and goes. Americans feel it more on July 4 than on July 6. Are non-black Americans therefore more responsible for slavery on the earlier date?

A more convincing justification for collective responsibility, I think, is rooted in effects that don't depend on changing thoughts and feelings. Instead, the idea is to focus on benefits reaped by living people. In the paper I quoted earlier, Radzik advances such a proposal: You share in the responsibility for wrongs committed by a group if you are benefitting from those wrongs. A similar argument was, I thought, the most convincing part of Coates' essay. The effects (and vicious practices) of white supremacy persist to this day, he notes. Therefore Americans who are not black are getting advantages today that stem from racist ideology and politics. Someone asked, after Coates' piece came out, Why should an immigrant deliveryman in DC pay taxes that help support a reparation fund for African-Americans? This benefits analysis might supply an answer.

These are discomfiting arguments. One reason is that we know that some use collective responsibility to justify violence, not justice. (To hold all Israelis responsible for the occupation of the West Bank does not justify raining rockets down upon them.) But the things people do with a finding of collective guilt ought not to affect our judgment about that finding itself.

The deeper unease about these kinds of arguments is that they stir up the chill winds of guilt. Whose government, after all, just restocked Israel's ammunition? It takes a distancing sense of one's own innocence to proclaim that innocents elsewhere should be spared. Lacking that, the boys in the photo cease to be someone else's problem. If you believe only in individual responsibility, you can think "they, over there, did this, and it's too bad. Now let's check my Amazon order." If you accept the idea that everyone in a nation can collectively share responsibility for what it does, you have to say something different: "we did this."

Illustration: "Massacre of the Innocents" by Poussin, via Wikimedia