Want To Feel Less Pressed For Time? Try Giving More Hours to Others 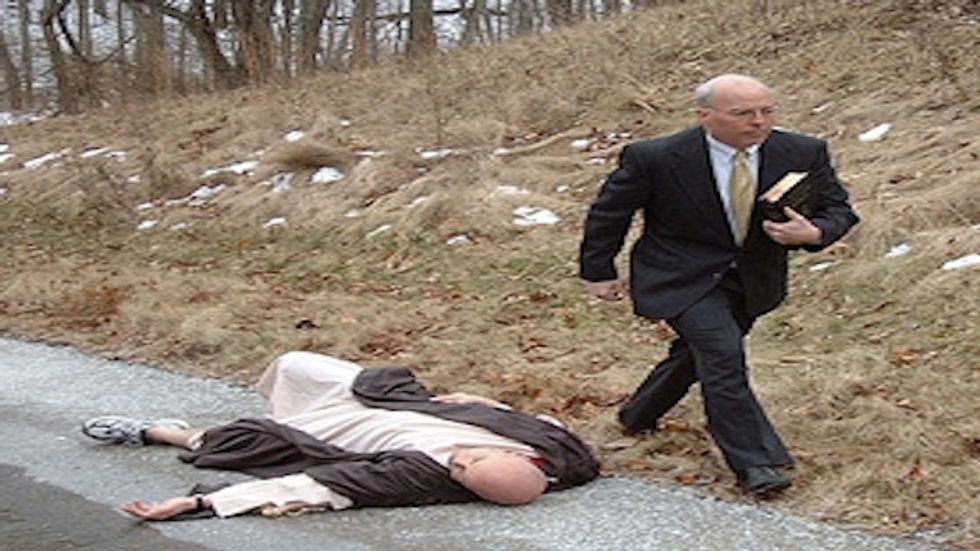 In his superb essay about his years as a Mormon (one of the best pieces about faith I have read in a long time) Walter Kirn notes that he said he fell away from the LDS because he didn't believe. But it was really because he didn't want to give up so much time. It was, he writes, "[t]oo much pressure to side with the miraculous, which places demands on a busy, modern person. You sit down on a plane beside a gloomy lawyer who’s cursing himself under his breath, and instead of ignoring him and reading a book, you have to ask his name and offer solace." What a time sink, right? But this study may help explain why people make this kind of sacrifice. People who gave time to others, the researchers found, felt they had more time to spare.

How could this be? The authors—the Wharton School's Cassie Mogilner, Zoe Chance of Yale's School of Management, and Michael I. Norton of the Harvard Business School—believe it's partly that doing something nice for someone else makes a person feel effective and capable, which boosts confidence that they can use future time well. More importantly, time in which something has been accomplished—helping a friend pull up his old wood floor, getting elderly seniors to the cooling center, giving a high school kid pointers on her college essay—feel fuller than hours spent dithering and blithering. That, they argue, makes future time feel fuller too.

They tested these ideas in a series of ingenious experiments, all of which measured the effects of different uses of time on people's anxieties about it.

In one, for example, a group of 136 student volunteers were 45 minutes into an hour-long session of chores when they were told their last task would be editing the college application of an at-risk high school student. Half were given the work and a pen; the others were told, hey, guess what, it turns out all the essays are already edited, so you can quit early. Before leaving, everyone completed a questionnaire assessing how much spare time they felt they had in general, and how much they agreed with the notion that time was their scarcest resource. They were also asked if they would sign up for paid online work the following week, and those who didn't say no chose 15, 30 or 45 minutes of commitment.

People who gave time to the needy high school kid committed to spend an average of nearly 38 minutes on the following week's optional work. On the other hand, those who found themselves with an unexpected 15 minutes (people who literally had more time) committed to less: slightly more than 29 minutes. Come the next week, the people who'd been given a time windfall did in fact spend an average of 7 minutes less on the next task. Moreover, their survey answers reported that they felt they had less free time than did the helpful people. People who received the free time were also more likely to see time as their scarcest resource.

There are other experiments in the paper (it will be published in a future issue of the journal Psychological Science but a draft version (pdf) is here). One tested the effects of time spent on self versus time spent on others, and another (my favorite) the effects of time spent on others versus wasting time (the laboratory proxy for a total waste of time was counting the number of e's in pages of Latin text, which I think works pretty well). They all showed the same pattern: Giving time to others left people feeling less time-starved than did other uses of their minutes.

Now, despite what the Mormons told Kirn (and the rest of us, in their long-running series of sweet-tempered commercials), there must be an upper limit on this effect. People with no time to themselves (for example, the authors write, people caring for demented old people) feel worn out, not serene. Perhaps, write Mogilner et al., their effect applies only to short-term gifts of time. An hour here or there may simply be a different experience from losing weeks or months to another's needs. Another possibility, they mention, is that control over time makes a difference in how people feel about its use. Deciding to be generous, choosing to live up to the ideal of one's religion, makes people feel good, about time as well as money. On the other hand, having no choice but to give may be the road to burnout.

So, big surprise, more research is needed. In the meantime, though, inspired by these results, I'm going to try a little experiment: Next time I feel desperate for time, I'll try giving up a little more of it, instead of hoarding it.