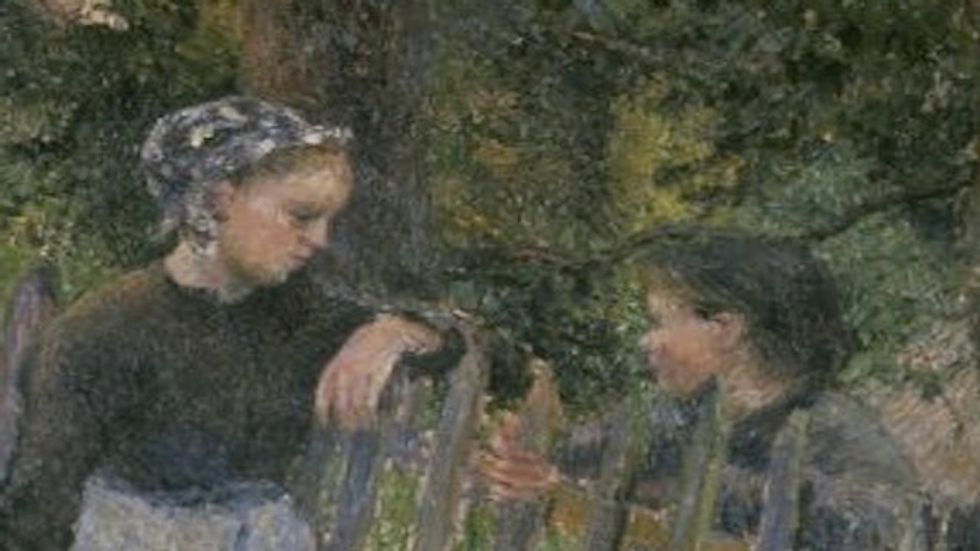 Good communication is a matter of getting "in sync" with others, as you've probably noticed when you've seen people match their steps perfectly as they walk, and imitate each other's gestures as they talk, and use each other's phrases and grammar. Last week, this paper reported  this kind of coordination in the most important place of all: When people converse, it reports, regions of their brains synchronize their activity. "Neural coupling," they argue, is a key part of communication.

Uri Hasson, Lauren Silbert and Greg Stephens recorded Silbert telling a 15-minute story while an MRI scanner recorded changes in activity levels in various regions of her brain. The researchers then played the recording to 11 volunteers while their brains were MRI-ed. As they listened, the paper reports, their brains' patterns of activity matched Silbert's.

The work is a nice departure from models that look for activity in "the brain," because, of course, communication doesn't take place in isolation. It also challenges the notion that listening and talking are neatly separated activities: "neural coupling" took place in both "comprehension" and "production" regions of the listeners' brains.

Especially interesting, as Michael Balter points out, were the regions in which the listeners went first: As they heard the story, their brains fired in a pattern that matched Silbert's, but hers came a moment later. They were, it seems, anticipating what she would say, priming themselves to hear what they expected. The better the match between Silbert's brain activity and these "predictive anticipatory responses" in a listener, the better the listener understood the story.

Thanks to some ingenious experiments by Sir Frederic Charles Bartlett in the 1930's, we know that listeners often "fill in" details of what they are hearing (and that their memories of the speaker don't distinguish between what they actually heard and what they supplied themselves). When students retold a folk tale he had given them to read, Bartlett found, they added some details (for instance, where the story read ``that Indian has been hit,'' some students recalled an Indian being killed, others an Indian being hit by an arrow). They also changed some unfamiliar facts (making the story's Indians "row" their canoe like proper English undergraduates). You can try it yourself: Read the story here, then re-tell it in a couple of days from memory, then compare what you've written or recorded to the original.

Yet these people felt sure that their memories of the story were accurate. They didn't notice the difference between what they had read and what they had supplied themselves. Why such confidence? Bartlett proposed that the mind understands the world by means of "schemas"—mental maps that relate actions and objects to each other. Once learned, the schema works rather like a form with blanks to be filled in. Once I know you're talking about Indians and canoes, I "fill in" arrows and moccasins even if you don't mention them (and I if you bring in samurai swords I might miss it, because those don't fit the schema).

Perhaps Hasson et al.'s paper, published in the Proceedings of the National Academy of Sciences, has touched on the physiological correlates of Bartlett's schemas. Perhaps, too, it has pointed to the physiological basis for the pleasure people take in synchronized activities—singing together in tune, marching together in time, doing the "wave." If "neural coupling" is essential to understanding others, then it would make sense that people would find it pleasurable and seek to create it.