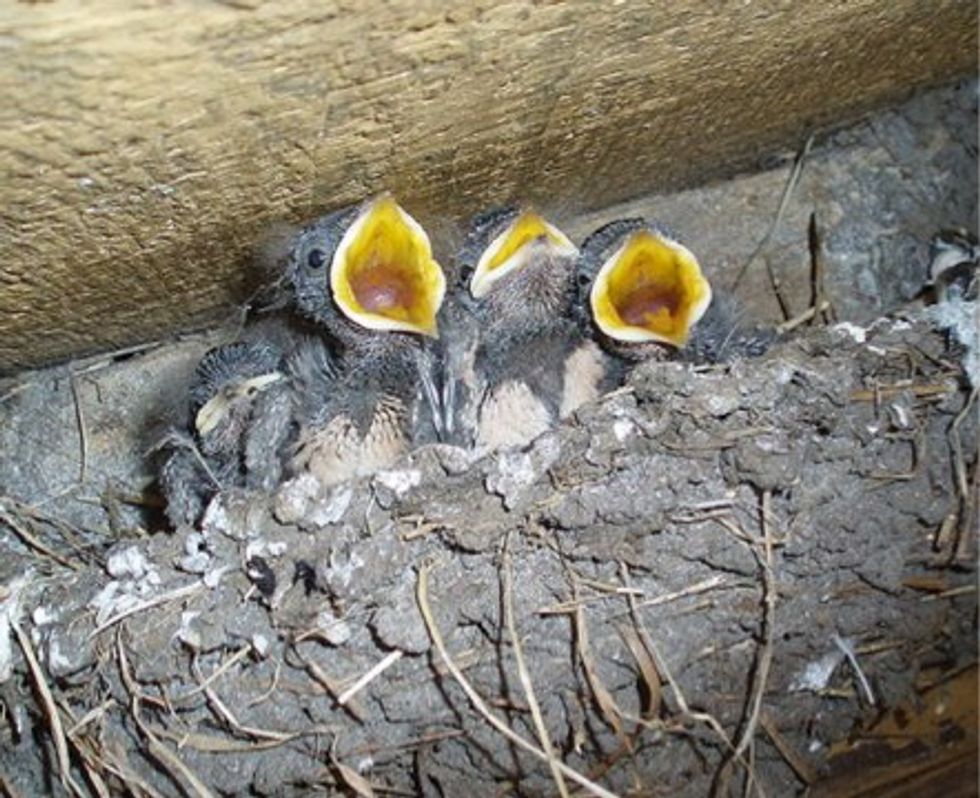 Ever feel sorry for a sidewalk sparrow with a cigarette butt in its beak? Did you sigh in wistful sadness at seeing nature's beauty polluted by human industry, which turns all loveliness to grime? Or try to fight off the weltschmerz with gallows humor? Well, cut it out. Seriously. Wipe that smug frown off your face and know this: Urban birds have a good reason to put cigarette detritus in their nests. According to this paper, anyway, cast-off cigarettes help ward off parasites.

Monserrat Suárez-Rodríguez and her colleagues at the Universidad Nacional Autónoma de México suspected that the nicotine and other chemicals in cigarettes might serve as insect repellents, because many bird species are known to line their nests with plants that have that effect. In their study, published today in the journal Biology Letters, they tested this theory in two ways.

First, they found 55 active nests (27 from house sparrows, 28 from house finches) on their university campus, and rigged them up with a battery-powered heat source, which attracted heat-seeking parasitic mites. The heat source was covered with sticky tape. That let the researchers attach plastic fibers from filters taken from a case of Marlboros (some unsmoked, some from a tool of modern science I didn't know about—a cigarette-smoking machine). The two different forms of cigarette filter allowed the researchers to hone in on the chemicals of smoking, because after smoke passes through a filter it contains much more nicotine and other chemicals than does an unsmoked filter.  The sticky surface also trapped the unsuspecting mites.

By counting mites in these traps, Suárez-Rodríguez et al. found a nice clear relationship between cigarette leavings and parasites: The more traces of smoked cigarette filters in a nest, the fewer mites.

So their theory worked "in the lab." Step 2 was to get confirmation in the "real world." So they collected 28 more sparrow nests and 29 house finch nests, in each case right after the latest chicks had fledged. They measured the total amount of cellulose fiber from cigarettes in each, and, again, counted parasites. More than four out of five nests had some cigarette butts, and, again, the more of those were present, the fewer mites were found.

Do birds actively seek out used cigarettes because of their anti-parasite effect? Or is it a happy accident that these things they collect for insulation happen to repel mites? The authors note that their study can't answer that one. But birds needn't be aware of what they are doing for their behavior to be a beneficial adaptation to urban life. (After all, cities themselves don't arise from conscious planning; they're a side-effect of a plethora of human motivations, from feeling safe in numbers to enjoying economies of scale.) Also, write Suárez-Rodríguez et al., their study doesn't touch the question of whether the benefits of nicotine from the butts outweigh the hazards to chicks posed by cigarette chemicals.

What we do know is that birds in urban areas seem to be adjusting to the environment we humans have made: Great tits in large cities sing faster and at a higher pitch (presumably to be heard over the din of city life) while other species just sing louder (Dave Hubbell notes here that nightingales in Germany, presumably unaware they're in such a law-abiding place, have been known to violate noise regulations by boosting their volume as high as 95 decibels). And robins in London have turned to singing at night, when the city is quieter.

So we shouldn't be too surprised if some birds are also making use of our recreational chemistry. (It would be fascinating to know, by the way, if cities with a lot of smokers have bigger sparrow or finch populations than places where few people indulge. Cigarette butts appeared in 90 percent of the house sparrow nests in this study, which suggests that if they confer a real advantage against mites, house sparrows have it a little easier in Tulsa (where smokers are nearly 25 percent of adults) than in New York City (14 percent). In any event, this study is a reminder not to sentimentally imagine that there is a "natural world," separate from ours, in which animals live their separate lives. We may prefer a bird's nest wreathed in beautiful green fronds that suit our idea of nature. But the owners might not.

Thanks to the good people at Evolution:This View of Life for the pointer to this paper.