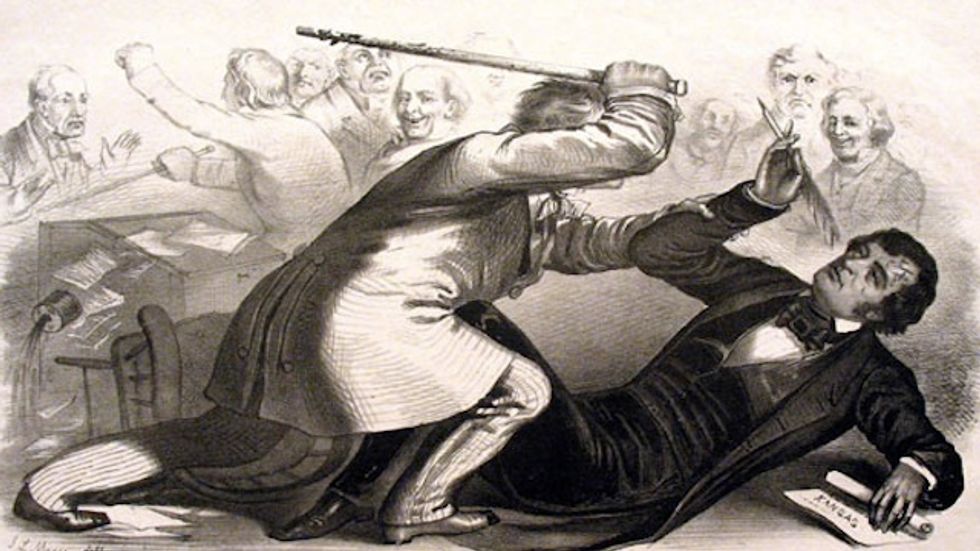 Is denial of climate change a fringe belief, like thinking the moon landing was fake? Or is it just one current of thought in our society, which deserves respectful engagement, like, oh, atheism, or being pro-life? The question is important. If a belief is beyond the pale of respectable opinion, then those who hold it aren't supposed to have a place at the negotiating table where society collectively decides who gets what, when, and how.

Over at The New Yorker, Gary Marcus has a post about a study that found a correlation between belief in not-respectable conspiracy theories (fake moon landings, Princess Diana was murdered) and disbelief in climate science. (The same study also found that enthusiasm for free markets also correlated with rejection of climate science and other well-established facts, like the link between smoking and lung cancer). That's interesting, but I'm not as convinced as Marcus is that this kind of work does much of anything to advance the cause of better policy or better politics.

Why? Because the structure of the study (looking for a link between certified-crazy ideas and climate denial) is a way of pathologizing this opinion. It sets up a dichotomy between, on the one hand, Scientists (the researchers, trying to figure out what is wrong with those people over there) who have Truth, and, on the other hand, the (Wrong-thinking) People Under Study. It reads to me like a bid to use the apparatus of science to nudge one commonly held opinion into the Not Respectable category in politics.

You might reply, well, sure, but they found a real correlation here. To which I say, why didn't they look for other correlations? Like, oh, a bad credit rating and endorsement of the climate-science consensus? Or frequency of bathing and climate denial? (I don't for a moment think those are promising avenues for research. I picked them because they are based on offensive stereotypes about liberals, just as "tinfoil-hatted crackpot" is a reviled stereotype about denialists.) After all, it is highly likely, according to a lot of recent research, that climate-science acceptance correlates with other lifestyle and character traits.

Don't get me wrong. I think the study of "motivated reasoning"—those mental filters that let in confirming information but reject evidence contrary to our beliefs—is important. But when I see a study about only the filters of the scientists' political adversaries, an alarm bell goes off. If we are all subject to these effects, then researchers shouldn't exempt their own opinions from study. (For examples of studies that comfort no side of the ideological divide, see the work of Dan Kahan at Yale Law School.)

Which brings me back to the difference between fringe beliefs and respectable political differences. If, like me, you are convinced by the overwhelming evidence for man-made climate change, then you might object that society should not treat climate-denial as if it were a difference of opinion about the tax code. Why should we accord respect to an obviously wrong and even repugnant view?

The trouble with that question is this: It presumes that whenever we aren't discussing climate change, we are perfectly blunt truth tellers. Which is, of course, false. I know a lot of secular people, who insist on the importance of facts and evidence, who are too polite to tell a Southern Baptist minister that they think born-again theology is nonsense, or to ask a rabbi how a universal God could choose one tribe to favor above all others. They keep a civil tongue at the Thanksgiving table when their smart-aleck nephew tells them that Obama is no different than Bush, really. If these examples don't ring true to you, then replace them with your own. Unless you're a hermit or a talk-radio host, you spend a fair part of every day thinking, well, I don't agree with that, and not saying so.

Why? Because everyone is entitled to her or his opinion, and you can't expect everyone in a democracy—or even a Thanksgiving dinner—to agree on everything. Moreover, as the Founding Fathers recognized, in a fair society, that which you do unto others can be done unto you. My tolerance of you is the basis of your tolerance of me. Which we all need, because we all have sacred beliefs that we'd rather not see subjected to the torture of evidence and analysis. What could be more emblematic of our democracy, after all, than a dais crowded with imams, priests, abbots, pastors and rabbis? They're always there to appeal for peace and love. It works as long as they don't discuss subjects on which they are totally incompatible—subjects that happen to include their deepest beliefs and intellectual commitments. (One of Marcus' shrewder commenters made an important, related point: Most people who say they accept climate change are accepting it on authority, because it comports with their cultural and political commitments, not because they've spent weeks sifting through evidence.)

So let's not pretend that we never tolerate viewpoints that seem as wildly off-base to us as climate denial. We do. The issue lies elsewhere: In the social and cognitive mechanisms that tell us which nonsensical beliefs are worthy of this tolerance (your brother-in-law's belief in homeopathy, your neighbor's religion) and which we can dismiss. The U.N. plotting to take over our nation with black helicopters? Obama born in Kenya? AIDS a creation of the CIA? A lot of people believe these things, but not enough for them to be taken seriously by the rest of us. Why? Probably one important reason is that they are marked, in the minds of people who seek influence, as poisonous. If you want to make a name for yourself in media or politics, you know not to cop to believing these things.

I wish more people would study this collective self-policing of debate. Probably the best place to start would be at the border between respectable opinion and fringe. I'm referring to beliefs that were looked upon for years as fringe—equal rights for women, the wrongness of the Vietnam war, the importance of organic food—which rather quickly became, first, acceptable in politics and then turned into majority views. Or to those that were once respectable—no votes for women, Jim Crow, the shaming of couples who lived together outside of marriage—which became pariah opinions.

However those processes work, I think it is safe to say one thing about them must be true: They are under no one's conscious control, and they don't depend on facts. (For example, I think it is safe to say that 19th century women were just as capable as those of the 20th century, and that a change in the nature of female humanity was not the cause of the shift to women's suffrage.)

This leads to the fact about the fringe/respectable distinction that makes us all a little crazy: In your society, the difference between serious and crazy political thought is not up to you. Much as I would prefer to live in a nation where most people accepted that evolution is the basis of all biology, well, I don't. Much as I would like to live in a nation where climate denial makes a politician unelectable, ditto. Instead, I live in a country where a lot of United States Senators and Representatives are deniers, because denial has the endorsement of various media enablers and of a large segment of the population. The slow and patient work of changing society can and I hope will alter that situation. Simply declaring that this view is beyond the pale, though, will produce exactly zero change. It's not how a democracy works.

UPDATE, 4/19/13: Over at the excellent Retraction Watch blog, you can read about how Lewandowsky recently doubled down on the crackpot meme—he and his colleagues treated the predictable angry reaction to their paper as another instance of conspiracist thinking, in a second paper called "Conspiracist ideation in the blogosphere in response to research on conspiracist ideation." This paper has been up and down on the publishing journal's site (yo-yoing that does not amount to retraction, but which did prompt the interest of the Retraction Watch crew). You can see that it is now preceded by a complicated note about its status. Perhaps the editors are wrestling with just the issue I identified above: How respectfully to treat the thoughts and feelings of climate-change deniers.