Why do we love music?

Music is our oldest and most cherished ritual. How we treat it is reflective of who we are. 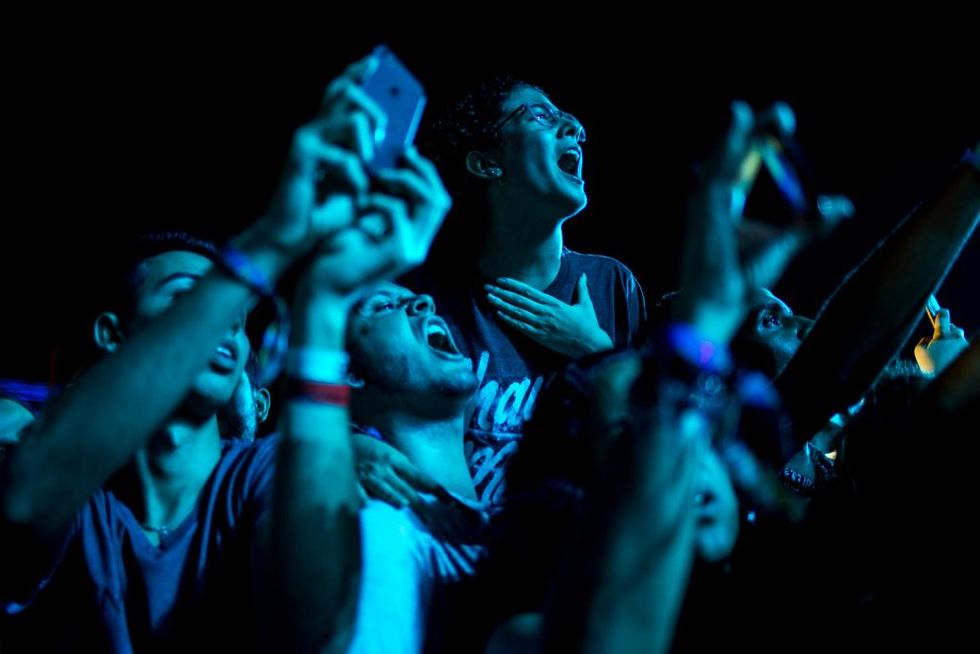 Fans of Shawn Mendes attend a concert at the Rock in Rio Festival in the Olympic Park, Rio de Janeiro, Brazil, on September 16, 2017. (Photo by Mauro Pimentel/AFP/Getty Images)

A number of years ago I happened upon a curious book tucked away in a vintage store on Martha's Vineyard. In 1896 the American music critic and musicologist Henry Edward Krehbiel published How to Listen to Music; the worn pages in my hand were from a 1912 edition. Unlike discovering a rare volume of Shakespeare, the $4 price of admission seemed reasonable. After an odd analogy of a newspaper reporter being unable to scale the Swiss Alps, Krehbiel makes his case: a concert requires a capacity for listening, not only the presentation of performance. Music fans share a responsibility to show up prepared and be educated on the nuances presented during the show. Since music is our most popular art, he continues, one which stirs such passion in us,

It remains passing strange that the indifference touching its nature and elements, the character of the phenomena which produce it, or are produced by it, is so general.

Forty-three years later the composer Aaron Copland asks a similar question in What To Listen For in Music. Music is to be enjoyed, so why this need to understand our love? He responds to himself: knowledge enhances enjoyment.

Copland had a leg up on Krehbiel, who penned his book at the very beginning of recorded music, and that for a wealthy clientele. By the time Copland scribed his instruction manual, vinyl was circulating around the world. Though he wrote his book for composers, he believed his profession has a duty to educate the public, to be society's ears, which creates a feedback loop:

In helping others to hear music more intelligently, he is working toward the spread of a musical culture, which in the end will affect the understanding of his own creations.

Both writers express an idea I learned early in my former career as a music journalist: the critic is a mirror reflecting back onto the artist and culture as a whole. Just as music travels across an extensive geography of brain maps, affecting regions dedicated to motor control, speech, memory, vision, and emotion, it is also a social force. If a note falls in the woods and no one hears it, there is no music. It is an entirely human construction, meant for our pleasure alone. In his masterful survey of twentieth century classical music, The Rest is Noise, the critic Alex Ross notes that numerous subcultures arose during those hundred years. Such widespread movements would have been impossible without recorded music. It seems silly to contemplate during a time when the planet's catalog fits inside a chip smaller than your fingernail, but for most of history listening to music apart from its performers was not possible.

The more music spreads, the more it changes, the more it changes us. Ross writes of Hitler's treacherous artistic destruction, murdering composers and destroying concert halls in his futile quest for dubious purity. Yet much music has since been created to counteract those forces of evil. Ross concludes,

Music may not be inviolable, but it is infinitely variable, acquiring a new identity in the mind of every new listener. It is always in the world, neither guilty nor innocent, subject to the ever-changing human landscape in which it moves.

Music has always been a social force. While its evolutionary roots are not understood, most accounts include a communal aspect. Archaeology professor Steven Mithen speculates that music was a communication system that might have predated language (and helped to form it). Neuroscientist Daniel Levitin, author of This Is Your Brain on Music, writes that music exploits a variety of brain regions, and is ultimately a form of perceptual illusion. The seemingly random collection of sounds is processed by a human brain that loves to impose order on everything. We see faces in clouds, we believe spirits transcend biology, and we love the collection of drums, guitars, and bass making our hips instinctively shake.

To understand music is to recognize place. Life is a soundtrack. This too is accounted for by neurochemistry, as Levitin writes:

Each time we hear a musical pattern that is new to our ears, our brains try to make an association through whatever visual, auditory and other sensory cues accompany it; we try to contextualize the new sounds, and eventually, we create these memory links between a particular set of notes and a particular place, time, or set of events. We don't only experience music through our ears. We hear music through our skin. Our eyes hear music as well, at least when attending (or watching a video of) a performance. Elizabeth Hellmuth Margulis calls music a “multimodal phenomenon." She writes about research showing we are influenced by physical performance regardless of what music is being played. Performer and sound are intertwined. Music is a surround-sense experience surpassing the vibrations being pushed into our eardrums and rattling our fascia.

Beyond just what we hear, what we see, what we expect, how we move, and the sum of our life experiences all contribute to how we experience music.

During a time when brain images are revealing many of music's secrets, no amount of chemical knowledge will change the social role it plays (though, as Copland might argue today, it could enhance our appreciation of it). Beyond numbers and mathematics, Margulis writes, every facet of perception and relationship is encoded in our love of music. This is the beauty of music, but it also reflects our darker angels.

Music bonds us to the culture we're raised in. As your perspective changes so does the music you listen to—or vice-versa, as has been known to happen. A wide musical vocabulary means you can communicate with a variety of people, and by extension, cultures. A people's music offers a direct line into understanding their identity.

That's why a 2015 report from Spotify that discovered the majority of listeners stop searching for new music after age 33 is so disconcerting. It's as if fans decide to stop learning about new possibilities and other people. During a time when music is more widely available than ever before, they're comforted only by what's already known.

This isn't to say that the music of your youth should not be enjoyed. My sonic “coming of age" was in the early- to mid-nineties. A fair amount of my listening time is devoted to this era of hip-hop and rock. To revisit is one thing; to be stuck is quite another. Many nationalistic fantasies playing out in America today are errant daydreams of a country that never actually existed. One wonders what era the playlists of those engaging in such fictions are from.

True, music is not only for pleasure. We're more complex than that. A long history of battle songs exists, just as there is a lineage of romance. Music has played a role in every function of our journey through time together. Like an orchestra, societies function better when they're in harmony, which gives us pause to recognize how we're experiencing music, and life, today.

I thought of Krehbiel's book recently when attending Bonobo at the Greek Theatre in Los Angeles. As my wife and I stood near the stage swaying to the first songs I was pleased to note how much everybody around us was enjoying the show. No cell phones, no rowdy conversations, just a little drink, a little smoke, and plenty of heads bobbing.

Then a group of eight young men and women appeared during the third song to dominate the row behind us. Phones out the entire time, rambunctious conversations were broken up with loud yelps at a performance they weren't actually watching. It's the reason I rarely attend shows anymore, which is a shame considering that for over a decade they were a mandatory part of my career. I'm simply amazed anyone would attend a show they have no intention of paying attention to.

Which makes one wonder if the cheap and ready availability of so much music has had the contradictory effect of making us immune to its power. I am not alone in this frustration. Some legendary artists refuse to perform live, while others employ cell phone lock pouches to keep audience noise at a minimum. Music is interactive, yes, but an understanding of roles should still be honored. You don't attend a concert to have the light shine upon you.

A hard lesson in the era of immediate gratification and selfie validation, though one music is equipped to teach. Music is our oldest and most cherished ritual. It is a mirror of who we are as a species—valuable advice for when the looking glass is turned back upon us to see what we've created. The sound doesn't lie.