Why Do We Crave Out-Of-Body Experiences? 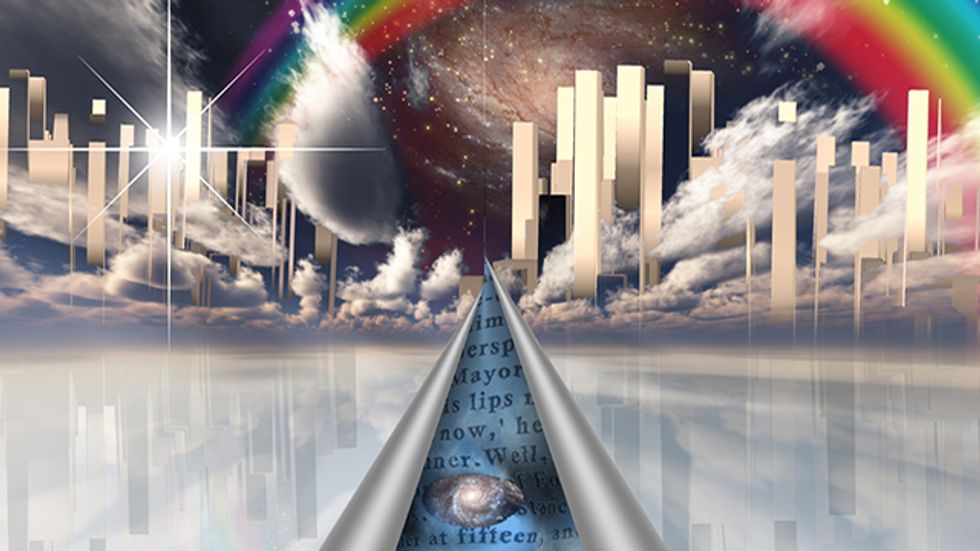 Eben Alexander, author of the bestseller Proof of Heaven: A Neurosurgeon’s Journey into the Afterlife, is only the latest in a long line of historical figures who has argued for the possibility of a disembodied state—that the human ‘soul’ or some such ineffable agent has the ability to leave the physical body, journey around the ethers, and return with a story, mythology or, in this particular case, confirmation that no matter what we do on this plane, we are loved and a better world awaits.

Out-of-body experiences are a global phenomenon. Paramahansa Yogananda famously wrote about watching one of his teachers in India leave his body while moseying along a river, jumping into one of a dead man lying on its bank, then proceeding to walk. (He never mentions how or if his teacher reclaims his former ‘meat casing.’) And then, of course, there’s Jaqen H'ghar, who in his last appearance in Game of Thrones does a similar trick by shapeshifting before leaving Arya Stark.

We are fascinated with the possibility of becoming somebody else. Everything from make-up and masking to an unquenchable longing for afterlife fires the neurons that contemplate an existence beyond and outside of this one. The notion of ‘leaving’ our body might be an enticing one, though, as VS Ramachandran writes in The Tell-Tale Brain, it has less to do with a soul and plenty with our brain’s right hemisphere.

Our right brain, he notes, can take a detached view of reality, like when we’re preparing a speech and envisioning an audience to present it in front of. The mental ability to ‘see’ ourselves in front of an invented human audience belongs to our right hemisphere. He extends this fact to out-of-body experiences (OBE’s).

Damage to the right frontoparietal regions or anesthesia using the drug ketamine (which may influence the same circuits) removes this inhibition. As a result, you start leaving your body, even to the extent of not feeling your own pain; you see your pain ‘objectively’ as if someone else were experiencing it.

Ramachandran cites one of his stranger cases: a software engineer named Patrick who, due to a tumor on his brain’s right side, noticed a ‘phantom twin’ attached attached to the left side of his body. When the neuroscientist irrigated Patrick’s left ear canal with ice water, the patient noticed that his twin was shrinking in size and changing posture.

More tellingly, the desire to leave our bodies occurs in trauma when, for example, a woman is raped or someone encounters a near-death experience: the right hemisphere attempts to remove ‘us’ from the experience, effectively shutting down mirror-neuron activity and creating a detached sensation in our bodies.

I can verify the latter. Upon fracturing my femur in 1986, there were many times during my three months of bed rest in which I projected ‘me’ outwards, often into a healthy body that functioned properly. I’m not sure if it was the trauma or the numerous drugs I was ingesting for pain and night terror, but the idea that ‘I’ was no longer in my body was a regular occurrence.

What interests me most about OBE’s from a psychological and spiritual perspective is this: Why do we crave to be out of the body we’re in? What are we really running away from?

Pushback against brain science goes something like this: 'Science hasn’t proven that you can’t leave your body, so your stance is just as plausible as ours.' This form of argument was used when Skeptic magazine publisher Michael Shermer discussed Alexander’s heaven with the neurosurgeon himself, along with OBE cheerleaders Marianne Williamson and Rabbi Marvin Hier on Larry King.

The biggest problem is treating ‘science’ as one stagnant field always out to disprove a spiritual metaphor. Watching the video, Shermer was the only thinker who showed any humility, admitting that if he were to meet a divinity, he would change his opinions about existence. The other three were not nearly so flexible in their assertions. Yet this is what good science does: matures in the face of evidence. If only our spiritual guides were so humble.

As Shermer states, we have the capacity to treat other people’s anecdotal tales as potentially flawed, but if our brains inhibit certain neural firings, we declare that our experience must have happened with fundamentalist zeal. This is the argument he uses with Alexander, who merely nods without offering anything substantial in return.

Our brains are complex organs that we are just beginning to learn about. We don’t have all the answers about it—it is, in fact, the ‘it’ that is trying to understand itself. I’m simply not sure what social or spiritual worth leaving our bodies would have even if true.

We spend so much time trying to become somebody or something else—I’ve worked at health clubs, gyms and yoga studios for well over a decade, so this I know well—that I continually wonder when do we simply come to terms with who we are and what we’re doing in the present moment? What could possibly be more spiritual than that?