Why Christianity has been pushed underground in China

The Chinese government just banned the online sale of Bibles, yet another attempt at President Xi's suppression of Christianity. 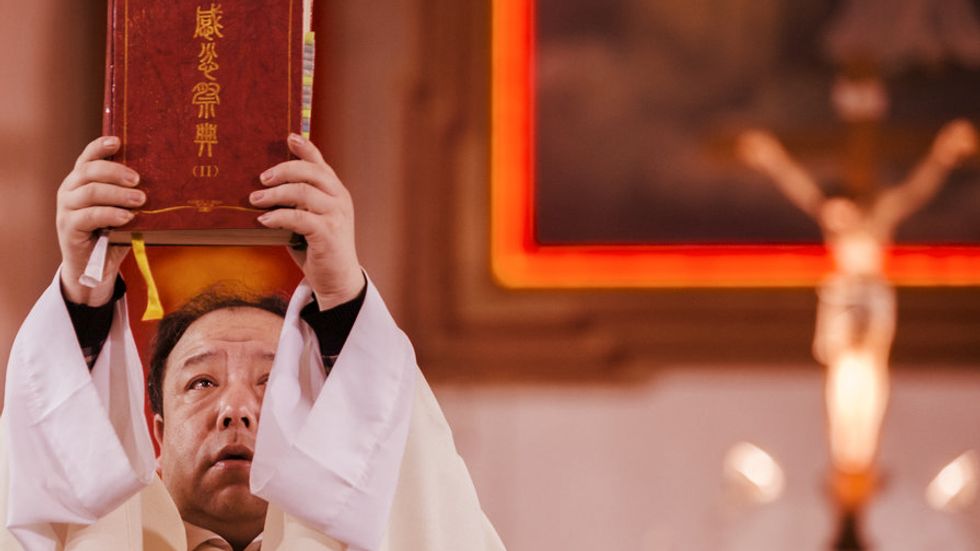 Reverend Peter Pang Wenxian holds the Bible above his head at Friday morning mass in Beijing at the Cathedral of the Immaculate Conception, February 22, 2013. (Photo by Jonah M. Kessel/For the Washington Post)

During the week, I collect articles on my browser to be read later. “Later” often implies Saturday, when I have more time to sift through pieces I’m interested in catching up on. Neither of the two I just read inspire much hope about free speech.

First, there’s this piece on autocratic leaders pushing Hungary and Poland away from democracy. Being that 75 percent of my heritage derives from these two countries, I’ve followed the rise of Viktor Orban and Jaroslaw Kazcynski over the last few years. The latest news is not inspiring. A succinct summation:

"“Hungary First” is Orban’s election slogan. His relentless anti-immigrant campaign, including claims from a cabinet minister that migrants and refugees would force Hungarians to eat insects, has produced a startling level of fear. Csaba Toth, a political scientist, told me that “children in kindergarten have drawn Soros as the devil and migrants as evil figures who will take you away if you are not good.”

Poland is not in better shape. In both cases, free speech is restricted, and becoming more so, which leads to the second article, this one much closer to home: the Department of Homeland Security is now creating a database of journalists.

The United States government, traditionally one of the bastions of press freedom, is about to compile a list of professional journalists and "top media influencers," which would seem to include bloggers and podcasters, and monitor what they’re putting out to the public.

The problem with becoming too comfortable with how your society functions is that others have vested interests in exploiting your comfort. By the time you’ve realized what’s been lost it’s too late. This is the America we’re currently occupying, pretending it isn't happening day after day.

A Chinese Catholic deacon holds a Bible at the Palm Sunday Mass during the Easter Holy Week at an 'underground' or 'unofficial' church on April 9, 2017 near Shijiazhuang, Hebei Province, China. (Photo by Kevin Frayer/Getty Images)

Unlike America—at least unlike what America has professed itself to be—China makes no pretensions about free speech, especially when it comes to religion. Whereas in America certain religions influence legislation to an uncomfortable degree, Chinese officials are operating in the opposite manner. While the battle between the Communist Party and Christianity is quite old, the nation recently took another step towards suppression by banning the online sale of Bibles.

In an effort to promote “traditional values,” the Chinese government has actively been promoting Buddhism and Taoism, as well as folk religions, while clamping down on the spread of Christianity and Islam. This has forced many Christian churches to go underground. While the Times cites the nation as boasting 38 million Protestants and six million Catholics, the data are hard to accurately assess considering the unwillingness of some members to claim their faith.

In fact, other data count up to 115 million Protestants, with a prediction that by 2030 the nation could have a total of 247 million Christians. Including Catholics, that would make Christianity the nation’s most popular religion—a reality President Xi’s administration is fighting against.

Indoctrination becomes a tool when outright suppression isn’t feasible. Preachers have been told to include Communist Party propaganda in their sermons. With a recent law prohibiting unauthorized religious gatherings, handcuffing churches by denying them the ability to collect donations, offer religious ideas online, or instruct children, Xi is attempting to control the religious ideology of nearly 1.4 billion people. Anyone hoping to push back against this initiative will have a long road to religious freedom under this “president for life.” Xi is advocating against “overseas infiltrations” from foreign religions, expressing a long-held communist belief that Christianity will undermine the party’s agenda. This is all happening as the government is, ironically, ending a 70-year stand-off with the Vatican. Church leaders, eager to make inroads in China, were criticized for asking bishops to step aside to allow the installation of two state-appointed leaders—one who was excommunicated by the Vatican years ago.

That’s not the only shady move by the government. In 2014 it began demolishing churches for suspect reasons, such as improper building permits. Churches across the Zhejiang Province were ordered to remove their crosses. Rather than agree to these terms, preachers went underground out of fear of further retribution.

A Chinese Catholic worshippers wait to take communion at the Palm Sunday Mass during the Easter Holy Week at an 'underground' or 'unofficial' church on April 9, 2017 near Shijiazhuang, Hebei Province, China. (Photo by Kevin Frayer/Getty Images)

The Vatican views this dialogue as a sign that better communication might lie ahead. But the track record is not there. Recall, the Chinese government installed its own Panchen Lama as Tibet’s next spiritual leader—the Dalai Lama’s appointment, which represents the mandated succession, was kidnapped by the Chinese government within three days of being named in 1995. Hopes that Xi will budge on Christianity seem futile.

While I’m no fan of many lessons religion offers—at least when it comes to metaphysical ideas—I’ve argued that children (and adults) should be instructed in more religion, not less. Indoctrinating children is one thing; educating them on the diverse religious ideas of the world equips the youth (and people of any age) to grapple with their own spiritual identity while learning to be tolerant of others. You can’t believe your idea is the best if you have no clue what the competition entails. You also can't argue that faith isn't helpful just because it doesn't help you.

Which is what China is attempting with the suppression of Christianity and Islam. Robbing people of their spiritual values is no way to lead. Given all we know from history, it’s shocking that these leaders don’t recognize that such restrictions never end well. Yet here we can turn to religion for guidance: power corrupts, and the most powerful become stains on the very history they’re praying to be adored for.