Why Are Americans Susceptible to Magical Thinking? 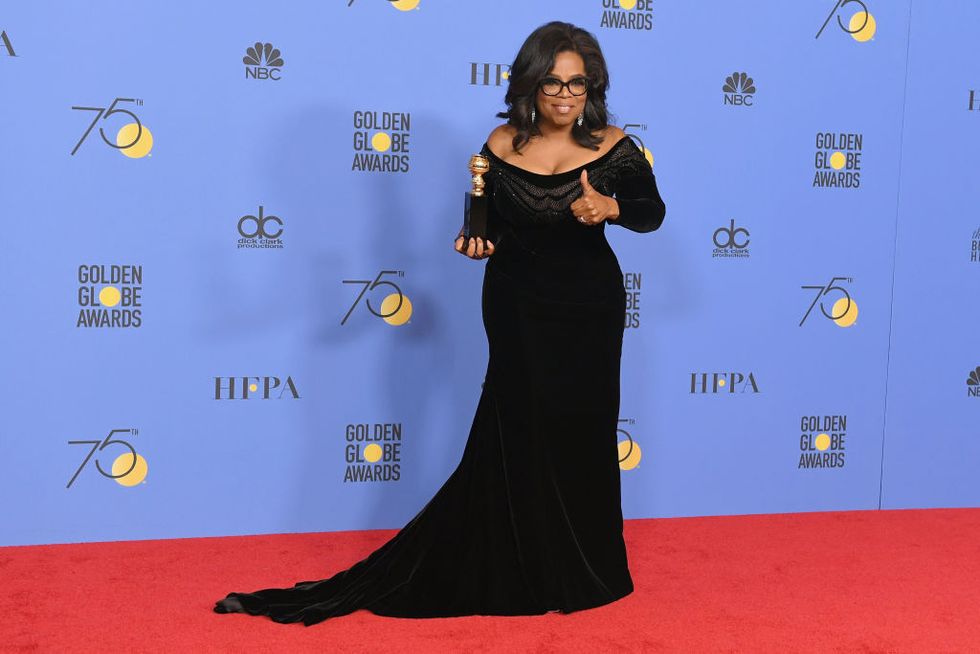 Oprah Winfrey poses with the Cecil B. DeMille Award in the press room during The 75th Annual Golden Globe Awards at The Beverly Hilton Hotel on January 7, 2018 in Beverly Hills, California. (Photo by Kevin Winter/Getty Images)

In a discussion with Larry King, Oprah Winfrey tells his audience that the book, The Secret, offers an essential teaching she'd known since starring in the 1985 movie, The Color Purple: You are responsible for your own life. She explains this by retelling an incident in which she was praying to be picked for the movie at the exact moment Steven Spielberg called. Winfrey is no newcomer to magical thinking. She's long promoted it on her show, in her magazine, and with her television network. Besides being a Rhonda Byrnes acolyte, Winfrey gave a platform for Jenny McCarthy to run with disproven vaccination-autism claims and fully endorsed Dr Oz as he spread pseudoscience on her shows.

Winfrey has certainly been a strong female personality for decades, yet balancing entertainment and reality has long been challenging. Now, after an inspiring monologue at the Golden Globes, she is both being asked to and considering a presidential run in 2020.

That the cult of celebrity has overtaken the American consciousness is not surprising. The last two presidential outcomes produced considerable awe and consternation from the other side: Mitt Romney's visible shock when conceding to Obama in 2012 and, well, you know the other. Yet a basic understanding of history could have predicted the forces behind both of these elections.

Maybe it's the problem of manifest destiny: Americans believing we're endowed with a sacred duty to excel like no other nation in history has fostered all sorts of delusions. Perhaps it's the disconnect from the reality of war and authoritarianism we have long enjoyed. Our relative comfort has allowed our imaginations to run wild, so run they do. Unchecked fantasies are known to arrive with unforeseen consequences.

There is precedent to our current moment because there's always been precedent, argues Kurt Andersen in his latest book, Fantasyland: How America Went Haywire. The bestselling author and host of Studio 360 has written an encyclopedic entry into the mayhem of modern America, informing readers that along every step of the way it's been mayhem, beginning with the very first immigrants.

No, not the pilgrims; the Jamestown colony. The first English settlement was not in Plymouth, as popular lore goes. That distinction goes to a series of gold-seeking groups that unsuccessfully tried to settle in Virginia. Eventually abandoning their dreams of gold—the term “fool's gold" is derived from their miscalculations—the colonies did eventually thrive with a crop that plagues us to this day: tobacco. Plymouth isn't the only myth Andersen dispels in Fantasyland. He spends chapters focused on the nineteen-sixties, an era loathed by fifties-loving conservatives and adored by progressives. Problem is, that era initiated a confluence of forces that allowed magical thinking to dominate in medicine, health, politics, and just about every other field.

This, Andersen told me, is just a continuum that began with an extreme Protestantism that America was founded on, which continues today through a “de-privileging of reason and science over magic and magical thinking and fabulism of every kind." He continues:

What I call this big bang that happened in the sixties—my argument is that it’s no coincidence that that belief in homeopathy or crystals or Carlos Castenada taking peyote to become a brujo in those best selling series of books, all of the bohemian magic and alternative health practices and so forth, which got going in nineteen-sixties, just as this incredible revival of the most magical and supernaturalist forms of Protestant Christianity came raging back.

It's not as if the sixties didn't produce positive benefits, including civil rights, feminism, and environmentalism. Yet the underlying strains of essentialism and dualism required for magical thinking reached new heights in both popular religion and on the fringes. From the looks of 2018, we're continuing to soar.

Andersen didn't set out to write Fantasyland because of Trump's victory. He never suspected it possible, even when the reality show star became the Republican nominee around the time he was finalizing edits of the book. Yet when the election was over Andersen realized he had laid out the perfect blueprint for the manifestation of the idea that a billionaire elitist could win as a populist champion of the working class.

Not that Andersen exclusively blames religion. He's more aligned with Sam Harris's evidence-backed spirituality than Richard Dawkins's hawkish atheism. During our discussion Andersen is clear to point out that freedom of religion, both as a belief system and a topic of debate, is an essential American quality. It's the extreme quality to it that's disconcerting.

In individualist-focused America the notion of many truths dominates. It was heard in the beginning of Oprah's speech: “What I know for sure is that speaking your truth is the most powerful tool we all have." When everyone has a truth they tend to take their truth as fact. Andersen quotes four-term US Senator Daniel Patrick Moynihan to me: “Everyone is entitled to his own opinion, but not his own facts." Day by day that line is blurrier.

Unlike many books required by publishers today, Fantasyland does not end with a four-steps-to-overcoming-magical-thinking guide. It is a descriptive gem, not a prescriptive trope. Andersen explicitly rules out the possibility of his recommendations becoming reality. We're in too deep for a sudden reversal, he told me, using the example of the “pathological individualism" gun rights advocates have employed over the last few decades. They've gotten so drunk on self-anointed mythical heroism that comprehending data proves impossible.

Once we go down these various paths of creating reality television or whatever it is, of turning pieces of our cities into little Disney Worlds, we can't turn it back except in our individual lives. In terms of the American life being what I call the fantasy-industrial complex, I'm not without hope, but once this set of boxes is open it's hard to imagine a future where we return to the previous version of normalcy.

In her book, The Human Advantage, Brazilian neuroscientist Suzana Herculano-Houzel reminds readers that “evolution is not progress, but simply change over time." America has experienced a variety of changes, yet as Andersen shows the country has long been rooted in mindsets separate from the facts of reality.

Oprah's Golden Globes moment is a long overdue and beautiful expression of the #metoo movement, uncomfortable and provocative at a time when her industry needs such provoking. It provides a wonderful template for using media to promote a social agenda, which is political in its own right. But that does not make a celebrity qualified to be a politician. As Andersen writes on the last page of Fantasyland,

Fantasyland won't instruct you on what to watch and believe. What it does is educate on how we've arrived here. Where we evolve next is anybody's guess, yet without an understanding of where we've been one thing is certain: we're going to repeat our mistakes. Then we'll be doomed to buy into the fantasyland-industrial complex once again.