Understanding the US-Mexican border: those are real people behind the statistics

Francisco Cantu wanted to put faces to the statistics. So he became a Border Patrol agent. 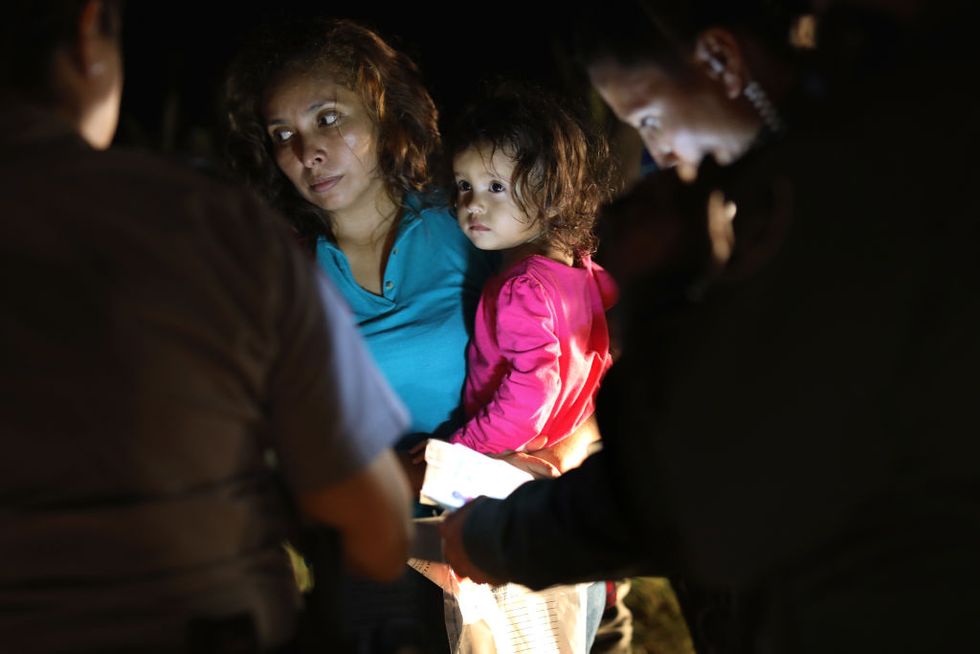 A Honduran mother holds her two-year-old as U.S. Border Patrol as agents review their papers near the U.S.-Mexico border on June 12, 2018 in McAllen, Texas. (Photo by John Moore/Getty Images)

A Honduran woman was breastfeeding her child under terrible circumstances. She had tried to cross the Mexican-US border illegally and was being detained in a McAllen detention center. Awaiting prosecution, her baby was hungry, so she was attending to the most motherly of tasks. Then a guard ripped her baby away from her. She’s not the only one to have her child taken away in what’s become an unprecedented practice of the current administration. While a combination of distraction overload and short attention spans keeps our national focus on irrelevant banter and diversions, the story of children—over 10,000 and counting—being taken from their families and stored like cattle is receiving too little attention. The only pressure the administration feels is overcrowding. Their solutions include an abandoned Walmart and a tent city.

Mexico and “the wall” are so burned in our national consciousness it seems we’ve forgotten that those are real people trying to cross the border, often for reasons we’ll never have to face ourselves. Over the last decade, more Mexicans have left America than entered it,  the main reason being family reunification. But that doesn’t make for a good headline. Cracking down on illegals, even ghosts of a fearful imagination, is a guaranteed winner of a campaign slogan.

Yet there are still some trying to enter. Many people view America as the land of the free, even though our attorney general recently disqualified victims of domestic abuse and gang violence as legitimate asylum seekers. We hear from politicians and pundits and policy advocates, we even occasionally hear from the public on these matters. But what about those experiencing it firsthand?

Francisco Cantú thought the same thing. While studying international relations in college, he wanted to put faces to the statistics he was reading about. This is a noble endeavor. Personally, I can imagine the horror of 10,000 imprisoned children, but I can’t really understand the psychological brutality it entails. Empathy is the best I can accomplish. Cantú, a third-generation Mexican-American, needed more than that, so he spent five years working as a Border Patrol agent.

His memoir, The Line Becomes a River, has received its share of controversy, mostly from immigrants, who call Cantú a “Nazi” and “traitor.” While this impulse is understandable, Cantú’s book is not an apology, nor is he excusing agent behavior. Rather, it’s an insightful and empathic look at an occupation so many of us know exists yet so few will ever experience. The value in that cannot be overstated.

It’s a beautifully written work. In section one, Cantú describes his first campaign in the field. He discusses the relationships, however brief, he develops with migrants. His fluency in Spanish helps. There are those he helps hydrate, those he offers a shirt, those he discovers stiff with rigor mortis and the nightmares that follow. There are sections where he leans a little heavily on his own empathizing; he paints a good picture of himself as the do-gooder in an ugly and unfortunate reality.

Cantú’s self-reflection deepens as the book continues, however. In section two, he’s transferred to a desk job, where he watches the border through a screen instead of the desert haze. There’s safety there—his mother is satisfied. The new role offers another window into the immigration process, one dominated by paperwork. He catches up on reading, observing the verbiage the press uses to describe migrants. He cites cultural sociologist Jane Zavisca, who collected over a decade of news reports of migrant deaths, to better understand the metaphors used to describe them.

A Honduran mother removes her two-year-old daughter's shoe laces, as required by U.S. Border Patrol agents, after being detained near the U.S.-Mexico border on June 12, 2018 in McAllen, Texas. (Photo by John Moore/Getty Images)

The results are not pretty. Migrants are described first by economic metaphors (“cost,” “calculation,” “gamble”) and second by metaphors of violence. Using cost-benefit analysis to describe death, Zavisca writes, is a way to “naturalize death” and “suggest that migrants bear some responsibility for their own deaths.” Violence leads to imagery of angry deserts and that ancient stock human habit, war metaphors. Dehumanizing metaphors came in third, which makes it easier to do whatever you want to these humans; treating others as animals is the easiest way to forgo guilt or shame. America is not the first culture to invoke “the other,” but we are certainly partaking in its trappings.

Antsy behind the screen, Cantú jumps on the opportunity to return to the field; he moves to El Paso. He had the desire, as historian Timothy Synder phrased it, to “turn the numbers back into people.” Arrests continued, death continued, and, as the dreams continued, Cantú realized that his time of service had ended. He returned to school.

Then comes section three, which is what makes this book so important. Up until this point, you’re introduced to passing characters, requiring a page or sentence. Then the author meets Jose, who has been taking care of the grounds of an open-air mercado that Cantú is now working at as a barista. He turns all of those numbers into a person.

Jose illegally crossed in the early eighties. Since then he’s (mostly) been an upstanding citizen. He battled alcoholism until his first child was born, swearing off the drink forever after. Father of three sons and a wife he loves, he spends his days maintaining the mercado’s grounds and working as a Chipotle cook. Then word comes that his mother is dying in Oaxaca. No one knew Jose didn’t have papers.

Cantú discusses a reality he had not yet seen: where those migrants went after he handcuffed them and filed paperwork. He watches Jose break down when seeing his family in court; picking up Jose’s kids to visit him in jail while Jose’s wife works a second job to make ends meet; the failed crossings; threats from shady smugglers who never follow through; a caring legal team that does its best in an uncaring system, and fails. Cantú concludes that migrants are never going to stop crossing as long as family members live in America. Those already here will not rush back to Mexico, a country many have never lived in. Mexican border towns are notoriously violent thanks to gang and drug activity, while a city like El Paso was named “safest city in America” four straight years (and is currently number two; another border city, San Diego, is number four). Americans claim to value family values so highly, yet when we come across examples of virtuous behavior we turn a blind eye. Cantú writes,

These same people, the ones with the most dedication to their family, they begin to build up a record of deportation, they have more and more problems with the government, and it becomes harder and harder for them to ever become legal. In this way, the U.S. is making criminals out of those who could become its very best citizens.

Mexico is, in fact, sending its best people. We just refuse to see that.