Now, you can add chanting to your brain training regimen. 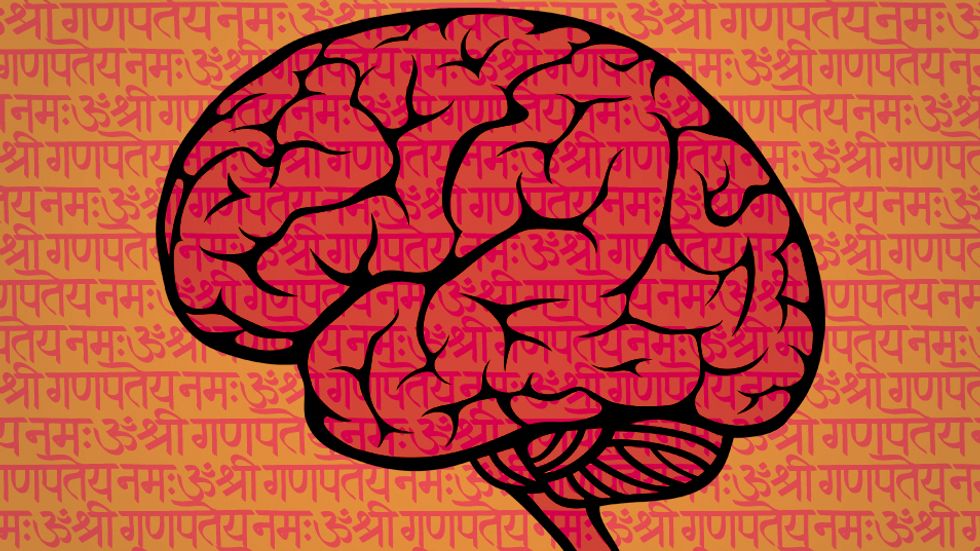 You hear a lot of strange theories in yoga studios. In my 20 years of practicing yoga I’ve listened to plenty of suspect claims based on intuition rather than verified science, regardless of modern yogis calling the system an “ancient science.” That said, yoga holds up well in certain regards, for pain, flexibility, and stress. Now, you can add to this list the recitation of Sanskrit mantras.

I’ve never been much of an advocate for chanting. I don’t OM when teaching and generally avoid styles like Kundalini that emphasize it. That said, when I have sat for kirtans, the chemistry of oral repetition can be hypnotizing. For my first book I spent many hours with Jeff Kagel (Krishna Das), one of America’s foremost kirtan artists. KD takes a holistic viewpoint on the community aspect of chanting:

"The stresses and lack of communication to the world that people feel, the way they feel cut off from each other, isolated and unhappy, without a lot of options, that leads to a need to connect and get back into yourself somehow. It’s debilitating, it’s crippling, living in the world without any deeper awareness that there’s anything else."

Connectivity is a big part of the sangha (community) created around chanting. But what about neurological effects? This, too, has long been open to mysticism. And so James Hartzell, a Sanskrit devotee and postdoctoral researcher at Spain’s Basque Center on Cognition, Brain and Language, decided to investigate claims about the efficacy of the “Sanskrit effect.”

During a time when we offload much of our memory to our devices, pockets of practitioners still honor millennia-old mnemonic techniques for memorizing tens and even hundreds of thousands of words. Before communication through writing, ideas and mythologies were expressed with cognitive tricks for memorization, such as rhyming and, in Sanskrit, using an “a” to denote an opposite meaning. For example, vidya means “knowledge” while avidya is “not vidya,” or “ignorance.”

The cognitive effects of meditation have been well-documented. Hartzell had a similar goal. He wanted to know if the thousands of hours of memorization and recitation pandits (Hindu scholars) perform affect the physical structure of their brains.

He recruited 42 professional Vedic Sanskrit Pandits that had trained for at least a decade beginning in childhood. Their training includes eight to ten daily hours of practice, totaling over 10,000 hours at the entry level. Once that initial phase is over the pandits continue to practice for three hours daily.

After scanning the pandits’ brains with MRI technology, Hartzell’s suspicions were confirmed:

Numerous regions in the brains of the pandits were dramatically larger than those of controls, with over 10 percent more grey matter across both cerebral hemispheres, and substantial increases in cortical thickness. Although the exact cellular underpinnings of gray matter and cortical thickness measures are still under investigation, increases in these metrics consistently correlate with enhanced cognitive function.

Most prominent was the effect on the hippocampus, where we record new information and set it to memory. Hartzell was not surprised that the right hippocampi (we have two), which deals with patterns, was most affected. The right temporal cortex, associated with speech prosody and voice identity, was also substantially thicker.

Hartzell is hoping that this research could lead to more in-depth studies on the effects of cognitive decline and diseases of dementia as the pandits age. Anecdotes are a plenty in the yoga world, but the researcher hopes this one is legitimate:

This raises the possibility that verbal memory “exercising” or training might help elderly people at risk of mild cognitive impairment retard or, even more radically, prevent its onset.

With a pending crisis in dementia looming as we spend more time staring at screens, the cognitive importance of the arts is becoming more apparent. Cognitive benefits of reading and poetry are being studied. In fact, in 2012 the UK overturned nearly 80 years of bad policy by reinstating poetry in its primary English curriculum. Thanks to research from Pew, turns out most Americans are still reading books.

Now we can add chanting to this regimen of cognitive training. Most likely the Sanskrit Effect is a Language Effect, meaning you don’t have to focus on this particular language to accomplish similar feats of memory. How this plays into an easily distracted world will provide insight into how much we value the sustainability of our brains. A sangha is only as strong as its weakest members, and we need everyone sharp and ready.