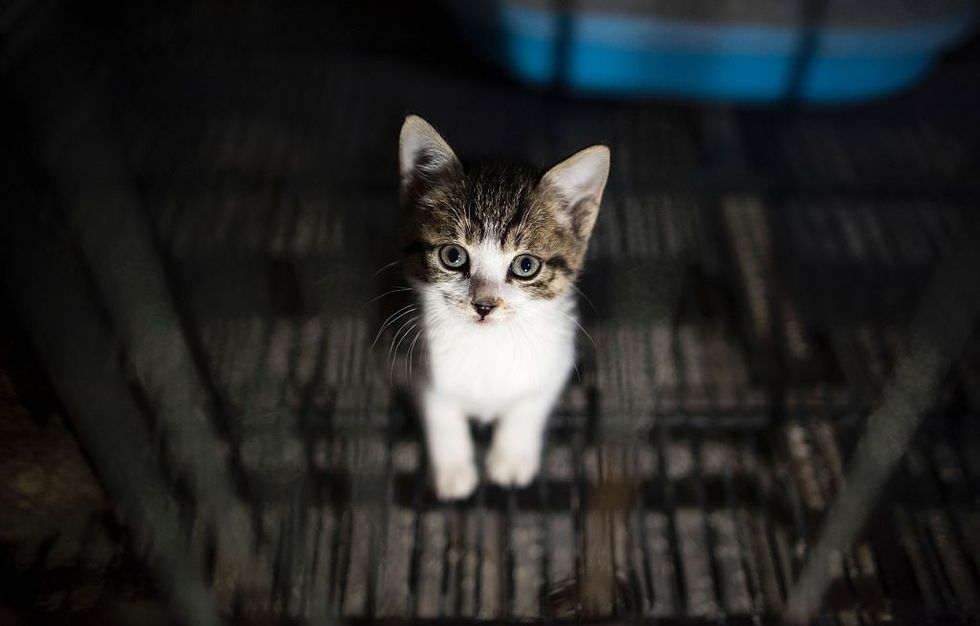 A kitten sits in his enclosure at a Buddhist temple in the suburbs of Shanghai on December 3, 2015. Johannes Eisele/AFP/Getty Images

Evolution can be a hard process to figure out. Rooting out pseudoscience and conjecture from credible science proves difficult. Understanding the biological utility of certain features might take decades to reverse engineer; speculating on direct ancestral lines is equally confounding. Family trees look more like a tangle of roots than the pretty flowers blossoming atop.

Oxford doctoral student Carlos Driscoll took a decade to figure out the ancestral lines of the domesticated house cat. When his data were all in he was shocked: every single cat today derives from one line, Felis silvestris lybica. It appears that the agricultural revolution roughly 11,000 years ago not only changed humanity, but feline life as well.

We often consider domestication a forced process, though it appears cats chose us. If the goal is continuing the genetic line then their success rate is incredible. Today six hundred million cats roam the earth. More cats are born each day in the United States than lions remaining in the wilderness, writes journalist Abigail Tucker, a number she puts at twenty thousand.

This does not bode well for lions, or cheetahs, or panthers, or any of the remaining felines left in the few forests supporting them. House cats are another story. When humans stopped their nomadic chases they formed large-scale farms. Cities started popping up. Cats appear to have said, well, fine, I’ll take this box here provided you also feed me and scratch me when needed, an arrangement that sums up our relationship today.

Yet for a long time humans were meat for cats. Unlike other animals that eat a variety of foods, cats are hypercarnivores. They don’t have the stomach for vegetables. They’ll die if deprived of protein, plenty of it; that’s what nature does to an animal with no predators. Your finicky cat has a genetic history of food snobbery.

As much as cats have taken over the internet with the same voracity they conquered our homes, we’re not always kind to them. Take cat hyperthyroidism, as reported in the NY Times last week. Whereas this disease was unheard of just forty years ago, today roughly 10 percent of senior cats suffer from this disease, as Emily Anthes writes.

A steady drumbeat of research links the strange feline disease to a common class of flame retardants that have blanketed the insides of our homes for decades. But even as the findings may answer one epidemiological question, they raise another in its place. If household chemicals are wreaking havoc on the hormones of cats, what are they doing to us?

Part of the appeal of cities is garbage. When the first advanced civilizations sprung up in the Indus Valley waste management became an unforeseen problem. Humans have applied different methods for disposing of waste—a problem we’re still not very good at solving, given nuclear contaminations and polluted rivers. Scavengers love our dumps, however. This was probably why cats started hanging around more often, eventually claiming residence of our favorite chair and bed. (Our two cats are practically immovable at night, as if their body weight quadruples when unconscious.)

The trade-off is that animals have to deal with our solutions to other problems, which are not always well thought-out. One of my own unforeseen consequences occurred when moving from Brooklyn to Los Angeles, in which I discovered that someone thought wall-to-wall carpeting is a good idea. Alongside vertical blinds it is the dumbest design decision plaguing modern apartments. Adding misery to stupidity carpets need to not catch fire (or spread fire if one is caught), and so the chemistry of retardation sounded plausible to manufacturers. Since licking whatever’s around provides plenty of carpet contact for our four-legged roommates, a new disease was born.

And so an incredible uptick of cats arriving at veterinary offices with the contradictory effects of increased appetite and weight loss began. With their metabolism regulatory system thrown off their hormones work overtime. Non-cancerous masses appear on feline thyroids, sending thyroid hormones streaming into their bloodstream. A cascade of deadly effects ensue.

Better living through chemistry is a disastrous philosophy when we don’t understand the consequences. For example, the documentary Pet Fooled highlights what happens when you feed animals large servings of sugars, emulsifiers, and carbohydrates instead of honoring their ancestral nutrition requirements. (The same can be said for humans.) Dogs are a bit trickier as they are omnivores. Cats operate best on raw meat, plain and simple, all the better when they’re not lapping up polybrominated biphenyl ethers (PBDEs) from your floor.

PBDEs also happen to have a chemical structure that resembles thyroid hormones and may mimic or compete with these hormones in the body, binding to their receptors and interfering with their transport and metabolism.

While PBDEs have largely been phased out of America and Europe, their half-life is long. Many products circulating still contain them, especially if your landlord doesn’t switch out the furnishings every few years (or decades). As the Times reports, whether or not PBDEs are solely responsible for feline hyperthyroidism is up for debate. Cats suffering from hyperthyroidism do exhibit increased levels in their blood. Human children exposed to these chemicals score lower on tests of motor skills and cognition, a problem likely affecting our furry friends as well.

Which is all a reminder that patience is an essential while underutilized virtue. Quick solutions create chronic problems, especially when dealing with the precarious balancing act of chemistry. Protecting against one ailment often leads to the creation of another. It’s bad enough when we do it to ourselves. That our fellow animals have to suffer from our ignorance is a tragedy as well.