The Difference Between Prayer and Meditation

Prayer effectively deals with sympathetic magic—the notion that your thoughts can alter reality from a distance, or influence outcomes in your life which you have no conscious control over. 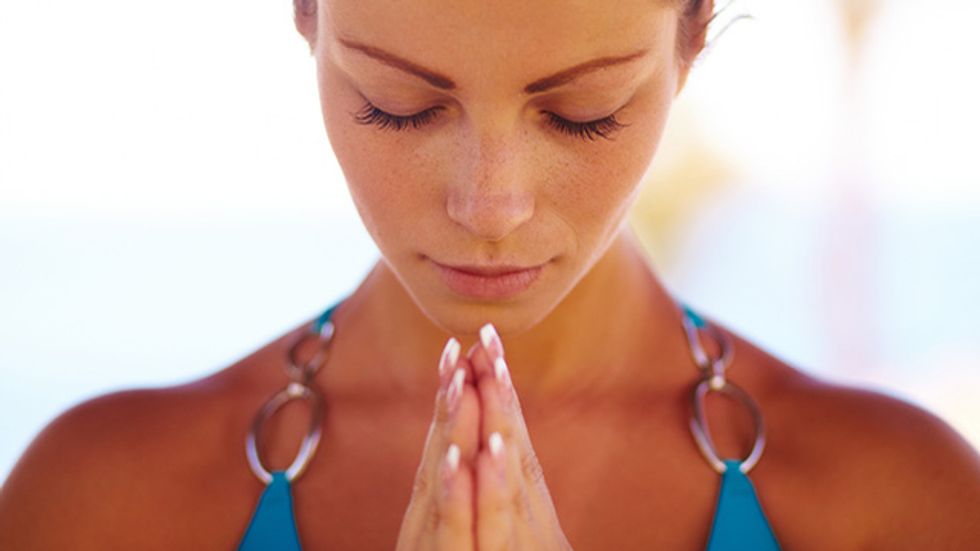 One day after my yoga class, a friend came up and asked what the difference between prayer and meditation was, and if they were the same thing. While crossover exists, and while many people have different approaches to both, I replied that no, they do not have the same goal in mind.

Prayer effectively deals with sympathetic magic—the notion that your thoughts can alter reality from a distance, or influence outcomes in your life which you have no conscious control over.

A wonderful example of sympathetic magic was documented by James Frazer in a subregion of Oceania, deals with the relationship between a wounded man and the agent of his wound.

In Melanesia, if a man’s friends get possession of the arrow which wounded him, they keep it in a damp place or in cool leaves, for then the inflammation will be trifling and will soon subside.

Of course, we now know that such a relationship does not exist; any infection or internal damage suffered by the man will not be cured by attending to the arrow. With prayer, there is no actual object to attend to, but rather a focus on a particular thought, which Barbara Ehrenreich has shown is equally ineffectual.

Attending to the idea that thoughts influence reality through the force of gravity, an occasional claim made by self-help gurus, she writes

"One, thoughts are not objects with mass; they are patterns of neuronal firing within the brain. Two, if they were exerting some sort of gravitational force on material objects around them, it would be difficult to take off one’s hat."

Ehrenreich also dismissed the notion that thoughts ‘send out vibrations.’

"Thoughts are not ‘vibrations,’ and known vibrations, such as sound waves, are characterized by amplitude and frequency. There is no such thing as a ‘positive’ or ‘negative’ vibration."

Prayers are sometimes involved in meditations offered by yoga instructors and new age hipsters, though this is a departure from the basic stated practice of one-pointed focus. While it is possible to focus solely on the object or outcome of your affection, the most effective way to meditate is by staying present instead of mentally pretending you’re influencing the future.

(You can influence how you personally act and react in the future through meditation, but this is a result and not necessarily a goal. This has to do with changing neuronal wirings through plasticity, as well as reducing elevated levels of hormones like cortisol.)

The most common mistake I hear about meditation is that its aim is to ‘stop thinking.’ While attending a workshop with Sally Kempton, who spent 28 years living a monastic existence before returning to public to teach meditation, someone asked her, ‘So how long do you get there for? You know, when you completely stop thinking?’

Punctuated gasps combined with laughter in the room. Kempton went on to explain that you cannot stop thinking, but you can slow down the rapidity thoughts and create space between them, which in turn helps you think more clearly.

I incorporated that idea into my classes by reminding yogis that as challenging as the postures and sequences might physically be, stillness is harder. This is nearly always evidenced near the end of class when we’re forward bending and some prefer to play with their toes or look around the room instead of focusing on being still.

So this, for my practice and teaching, is a much more relevant application of meditation: to be able to focus on one thing at a time. While engaged in meditation itself, this could involve many things: breathing, a mantra, an image. The basic idea is to let all your thoughts converge onto that solitary point and sit there for as long as possible.

Inevitably, working from the definition that ‘your mind is what your brain does,’ thoughts scatter. Choosing a focal point at the outset is desirable, so if you find your mind wandering, you can bring it back ‘home.’

This is where prayer and meditation meet: in silence. Spending quiet moments alone in reflection is beneficial for our emotional reactivity and thinking process, and these benefits have the ability to make us more calm and composed overall.

The danger arises in expecting an outcome from either. This is well-stated in yogic and Buddhist philosophy, where you don’t meditate for a specific result, staying open to all possibilities. From what I’ve seen in the American version of prayer, however, plenty of danger exists when the focus is on the outcome, rather than the simple act of being still.

Too often I’ve found the emphasis on outcome in the yoga community. This is contradictory to a main teaching: to know what you can change, know what you cannot, and most importantly, know the difference between the two. Meditation helps us understand that difference; sympathetic magic irreparably blurs the two.

Strive towards stillness, and let your actions and not thoughts alone help shape your reality.