A large-scale study of students in Maastricht provides valuable data on student performance. 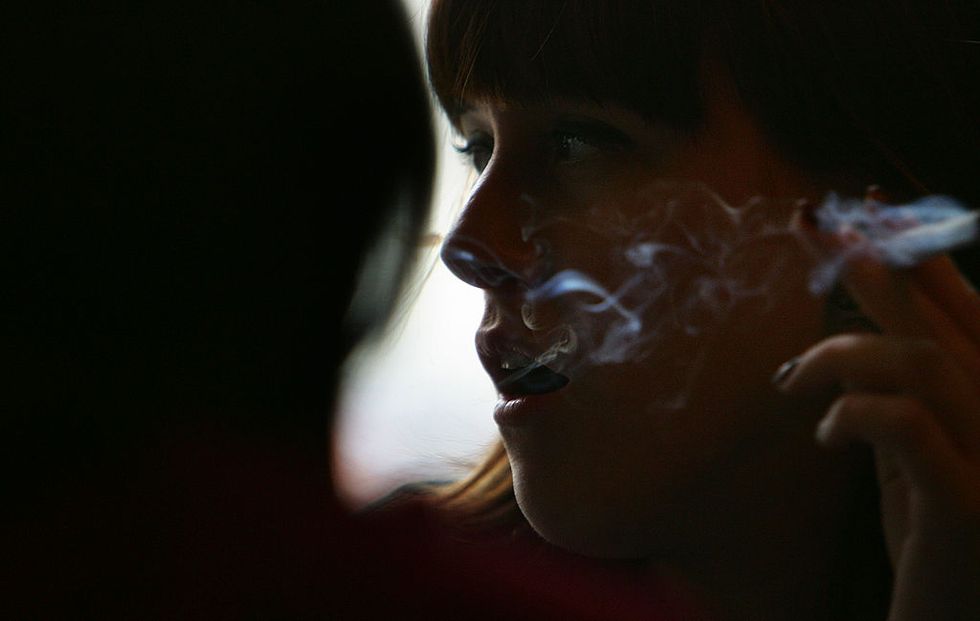 A woman smokes a cigarette of marijuana in an Amsterdam cafe on February 7, 2007 in Amsterdam, Netherlands. (Photo by Christopher Furlong/Getty Images)

Marijuana represents the Wild West of modern consumerism. Since I began smoking twenty-four years ago I’ve witnessed not only a profound change in reactions to cannabis, but also the numerous rebranding efforts trying to position marijuana as an elixir for every possible ailment. Embedded within these scientific endorsements is a new vape pen, edible, or cream being sold.

Not that some of these don’t merit attention—marijuana’s role in helping opioid addicts needs more sanctioned implementation. Beyond credible studies, however, this rebranding of cannabis as a spiritual lifestyle reeks of stale bong water. Bright colors and happy marketing are affronts to the national disgrace of minority and low-income Americans serving sentences for a joint. Marijuana is no cure-all, biologically or socially. It’s a plant with wonderful (but not overblown) benefits. Like with the consumption of any plant, there’s a downside.

Probably a number of downsides, which is why moderation is key in every facet of life. In a recently updated paper, now published in the Review of Economic Studies, economists Olivier Marie and Ulf Zölitz scoured over the grades of four thousand-plus students in the Netherlands to find out if legislation barring them from cannabis cafes resulted in improved grades. The answer is yes.

Maastricht sits on the southeastern border of the Netherlands, nearly touching Belgium and a short drive into Germany or France. Local officials began tightening marijuana laws beginning in 2011 as too many tourists were getting high in local cafes. Residents were growing tired of all-night partying and traffic jams.

The Netherlands decriminalized marijuana over forty years ago, but that does not mean the government is overly idealistic. The nation’s focus has been on addiction recovery, not recreational drug use. That said, while cannabis is illegal in the Netherlands, personal use is allowed. The first coffee shops offering cannabis opened in 1976.

The 2011 decision meant that Dutch residents could toke while foreigners could not, which offended foreign sensibilities; critics felt the government was being nationalistic and biased. The bridge and tunnel crowd had to find new weekend getaways, but for students at an international university, such as the University of Maastricht, where this study was conducted, only Dutch students can head to the cafes. Foreigners were now barred entry. In other words, research gold for Marie and Zölitz. As they write,

This unusual “partial prohibition” of legal marijuana access allows us to apply a difference-in-difference approach across nationality groups of students observed before and during the discriminatory policy.

The result? Barred students scored 10.9 percent better in their classes; they were also 5.4 percent more likely to pass courses. This proved especially true with low-performing students.

There are, of course, numerous factors at play. Your Dutch friend can easily pass along a bag. Marijuana is not especially difficult to procure on any college campus, especially one in which many students have legal access. Where foreigners smoke is affected, not necessarily that they smoke.

Then there’s math. For all the health benefits cannabis has exhibited, a healthy association with quantitative thinking and math-based tasks is not one of them. Researchers countered for this by splitting class loads across students. They discovered the anti-marijuana policy is 3.5 times larger for courses requiring math. Neuroscientists and economists fare better off the dope. Visual artists and musicians might tell a different story.

Other factors were involved, including alcohol consumption, final grade point average, and elective courses. The authors note this research should not be used to argue for or against drug policy decision-making. But this information is relevant to students in universities and, potentially, anyone working in quantitatively-driven fields. Math matters.

Further research might consider the decision-making process of university students. In his new book, Behave, neuroendocrinologist Robert Sapolsky writes about the frontal cortex, which he says “makes you do the harder thing when it’s the right thing to do.” The challenge for college students is that the frontal cortex, where decision making happens, is not fully formed in our species until sometime in our mid-twenties.

This has all sorts of social ramifications, but in regards to this study we have to ask, if a student knows marijuana impedes their grades, do they abstain? I certainly didn’t, but my degree is in religion, not accounting, my initial focus. The chicken or egg: Was cannabis influential in my switching of majors, or did the switching open me up to more consumption?

I’ll likely never know. But with the wealth of cannabis data emerging on campuses and in laboratories, younger generations will be offered a better sense of how to consume responsibly. Time will tell whether or not they choose to do so.