Philip Morris is looking to wind back manufacture of its traditional cigarettes in favor of e-cigs. Why? Because the younger demographic is hooked. 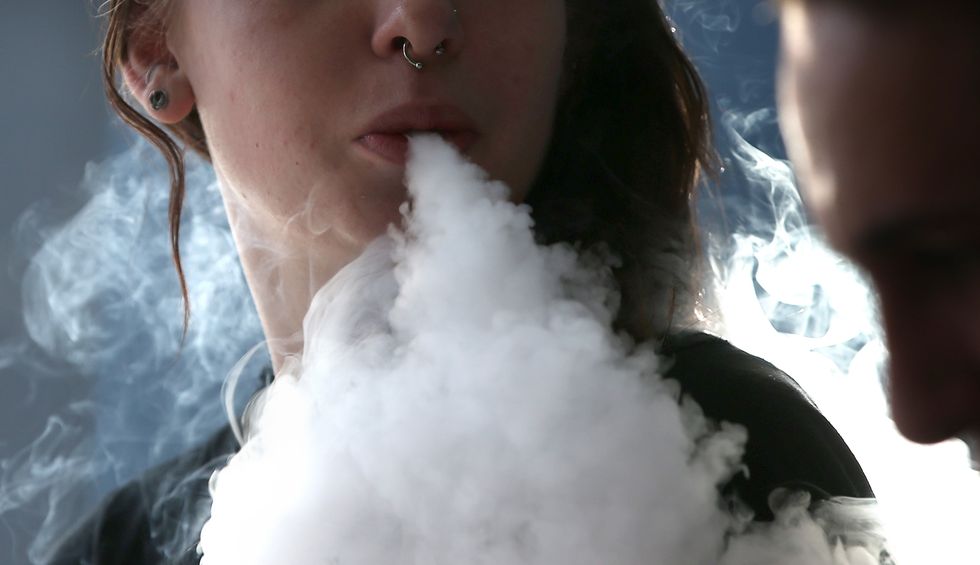 In January 2016, the California Department of Public Health released a report that called E-Cigarettes a health threat and suggested that they should be regulated like regular cigarettes and tobacco products. (Photo by Justin Sullivan/Getty Images)

Humans are sense-oriented animals. We rely heavily on our visual system, though the tactile sense and the strong influence of odor also play essential roles in navigating our environment. Yet thanks to overactive imaginations we often give credence to the invisible, in our faiths as much as the products and chemicals we ingest.

How else could superfoods become such overvalued nutritional sources? Once simply called food, raw cacao and seaweed (among many others) have been transformed into mystical manna. These marketing plans have less to do with nutrition than our longstanding willingness to suspend common sense.

Tobacco has gone through a similar public relations spin. Midcentury billboards of doctors prescribing cigarettes are laughed at today, and we’ve all seen photographs of what a few decades of smoking does to lungs, yet the addiction persists. Six million people die every year of cigarette-related ailments—a number that will likely be replicated in 2017. And 2018. And so on.

There is some hope, however, given that the number of cigarette smokers has been declining. Currently 15 percent of American adults claim to puff; roughly one-third of the number smoking 50 years ago. Public awareness efforts and anti-smoking campaigns have helped many realize just how damaging it is—cigarettes change your DNA—but there is another, more potent reason: e-cigs.

Cigarettes leave a nasty residue – on clothing, in hair, on furniture and walls and streets. To nonsmokers the assault is immediate and grotesque. E-cigs leave no such marker; many smell fruity and flavorful. Pleasing odors make us gravitate toward strawberry and peach cartridges provided the buzz is similar. Given how quickly e-cig smoke dissipates and how much smoother the chemicals go down there’s little wonder that smokers believe them ‘healthier’ than cigarettes.

This is most likely why Philip Morris hinted the company might soon phase out cigarettes altogether. Although the company still pumps out 870 billion cigarettes every year, the $3 billion it has invested in its Iqos device is changing the foundation of its business. The $56 machine offers a comparable nicotine dosage with a 90 percent reduction in toxins. Analysts hope this move will boost sales an additional $1 billion per year.

But is it healthier? A recent study conducted by researchers at the Karolinska Institute in Stockholm found that ten puffs on an e-cig caused an increase in endothelial progenitor cells (EPCs) comparable to smoking one cigarette. This suggests similar vascular problems in adults with continued usage. This is not an isolated study.

Perhaps the most worrying aspect of the e-cig evolution, however, is adolescents and young adults. As with many technologies, only 3.7 percent of adults over 65 report smoking e-cigs, while 21.6 percent of adults age 18 to 24 inhale.

More troublingly, 15.8 percent of adolescents smoked regular cigarettes in 2011, while 1.5 percent smoked e-cigs. In 2015 that flipped: 9.3 percent went for the pack while 24.1 percent toked and recharged.

The tobacco industry has received flack for specifically targeting minors. In a four-year period spending on e-cig ads rose from $6.4 million to $115 million. The illusion of safety remains a clear motivator for cigarette smokers to switch as well as new puffers to suck in Berry Bash and Mango Tango. Who can resist a few hits of Strawberrylicious?

The sentiment that seeing is believing is an old and tested philosophy. But it’s rather useless when discussing neurochemistry and vascular health. It took researchers decades to recognize the incredible damage cigarettes accomplish on human lungs, hearts, and heads. E-cigs are not a solution or even an evolution. A reduction of certain toxins is not the same thing as no toxins whatsoever. Rejoicing over ‘less toxicity’ is only a mask to the very real and damaging effects that cigarettes, in whatever shape or form, cause in the human body.

Philip Morris is an institution with one goal in mind. The company is not leading the charge; it’s merely responding to market forces and public preference. If the move has a veneer of healthiness the marketing team will lunge. Yet given the incredible rise in adolescent smoking and addiction it creates it’s impossible to pretend this is a step in the right direction.