H.R. 1150 expressly protects non-theists from religious persecution around the world. 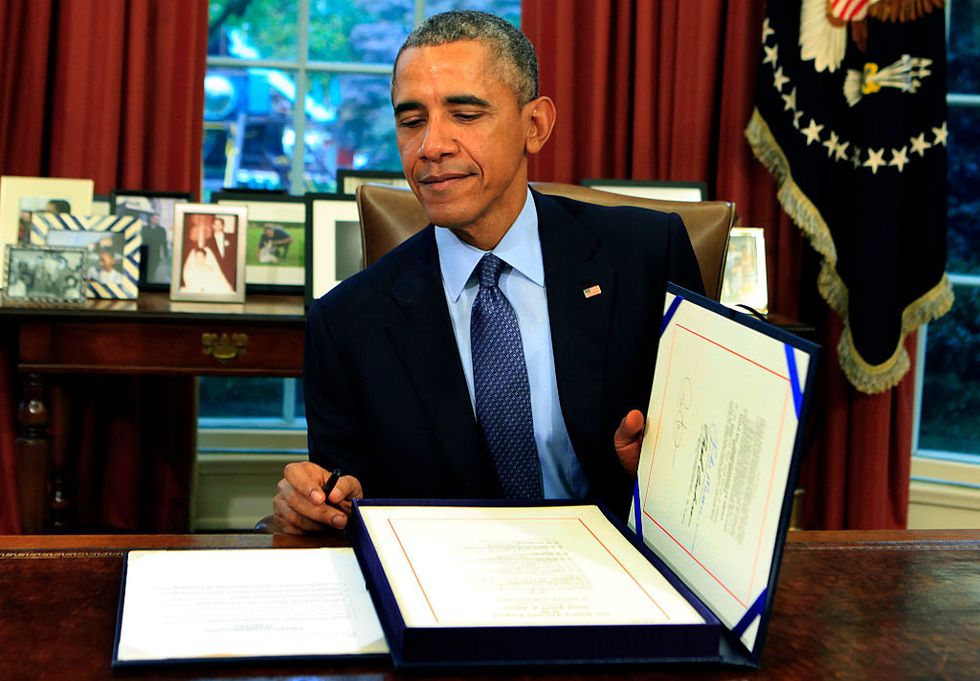 U.S. President Barack Obama smiles as he closes the legislative folder after he signed the bipartisan budget bill 2015 into law in the Oval Office of the White House November 2, 2015 in Washington, DC. Dennis Brack-Pool/Getty Images

Freedom of religion, as humanist groups often claim, also means freedom from religion. While not debated and publicized (and, frankly, griped over) as much as the translation of the Second Amendment, First Amendment rights are constantly being challenged. Jeffrey Toobin recently wrote about the harrowing challenging journalists could face with the new administration in light of the recent Gawker case sponsored by Peter Thiel, who used his deep pockets to destroy an organization he didn’t agree with.

Perhaps in preparation of the sea change about to occur in the former swampland known as Washington DC, President Obama signed into law amendments to H.R. 1150, otherwise known as the Frank R. Wolf International Religious Act. The bill, first signed in 1998 by Bill Clinton, is an attempt at stopping religious persecution around the planet.

The job of the committee formed by the first bill is to identify acts of persecution, then report them to the president, who will concurrently be handed a list of potential actions against that country to try to force them to stop. These actions include public or private actions or condemnations, canceling of state visits, and withdrawing U.S. aid and assistance.

In 2014 the Republican representative from Virginia’s 10th district, Frank Wolf, introduced a reauthorization to keep this independent commission alive through 2019. As a human rights activist Wolf was inspired by the Sudan crisis and Darfur genocide. He’s held numerous conferences in his home district to raise awareness of such issues worldwide.

While the bill, originally titled H.R. 4653, never found a home in that Congress, it passed in the House of Representatives in May 2016, over a year after Wolf retired from his seat. The bill is specifically notable for two reasons.

The first is that for the first time ever the term ‘non-theistic’ is included in the language. This is especially important given the heinous and deadly actions taken against secular bloggers in countries like Bangladesh, Indonesia, Russia, Egypt, and Saudi Arabia in recent years. Robert P. George, former chairman of the commission founded with the 1998 bill, writes,

Persecution of atheists and theists alike is equally reprehensible and must be condemned. Religious freedom is the precious birthright of humanity and must be honored and upheld for believers and skeptics alike.

The amendment also reminds Americans of their First Amendment rights. While we might not have public stonings of atheists, there have been other methods of persecution against nonbelievers.

This is especially daunting at a time when Trump’s pick for Secretary of Education, Betsy DeVos, has stated the educational system is the best place for restoring God’s kingdom. It’s easy to imagine how quickly nontheistic rights will fade when school systems introduce prayer and treat creationism as an equally valid course of study as evolutionary biology. There are plenty of ways to destroy a culture without bloodshed.

As of 2014, seven states still had enforceable laws prohibiting atheists from holding public office. Over half of Americans still claim they would not vote an atheist for president, a larger number than those who would shun candidates that have had extramarital affairs or never held office. For example, the 2016 election.

Persecution in America tends to take place at the local—i.e., tribal—level. Atheist veterans were heckled and mocked at a Memorial Day parade in Pennsylvania; the Central Arkansas Transit Authority refused to run ads by an atheist organization; the Mississippi chapter of the ACLU rejected a $20,000 donation because it came from an atheist group (in favor of LGBT rights, a double whammy); a high school student fighting school prayer was ostracized and threatened by peers and town mates.

The new amendment won’t necessarily stop such vitriolic attacks. But by being the first congressional bill passed that specifically cites freedom from religion in such a manner, it is an important step forward.

That said, the second notable aspect of the bill is not as productive. As Hemant Mehta reports, new language in the amendment means

if people who defend male infant circumcision or animal slaughter are “persecuted,” the U.S. will consider it a violation of religious freedom. Our government is therefore giving tacit approval to those practices.

That’s a shame. The practice of circumcision has long been debated, its purported benefits contested. Given a plethora of ritualistic slaughters and animal abuse across the planet—ten thousand dogs murdered yearly at a festival in southern China; the killing of countless chickens for Jewish atonement; males having sex with donkeys in Colombia—offering protection for such practices is a giant step backwards.

Humans have long claimed to be the planet’s superior animal, with religion playing a primary role in elevating the mindsets of followers—the whole ‘dominion over the earth and all other animals’ part. Through a few chance evolutionary steps we’ve dominated our environment, other species, each other. Recognizing a common playing field for every human is the first step. With his pen Obama brought us a step closer to that realization.