Pluripotent stems cells might be the key to creating reliable lab-grown meat. 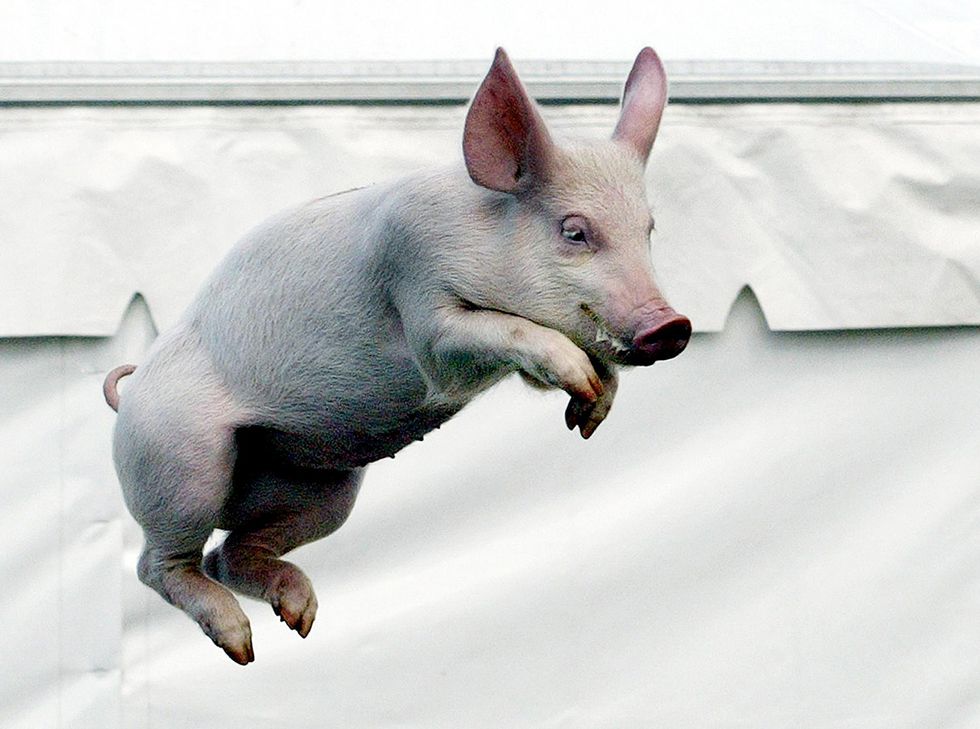 Miss Piggy performs her aerial antics, flying from a platform into a pool of water during rehearsal for the Royal Easter Show on April 9, 2003 in Sydney, Australia. (Photo by Greg Wood/AFP/Getty Images)

One of the strangest recurrences I experienced as a vegetarian was how happy other vegetarians became when a plant-based burger closely matched the texture and taste of meat. Recreating what you’re opposed to seems an odd goal.

Let’s face it: nothing vegetarian tastes like meat. Even more problematically, the closer you get to the proper texture, the more chemicals are being used to create that sensation. Humans are tactile, visceral creatures, yet we’re also prone to great illusions.

While I do eat meat again, I’ve also been following the emergence of lab-grown meat closely. If successfully produced this trend could address concerns by both omnivores and vegans. With no ethical argument against the killing of animals, vegetarians could find a wonderful protein source. Meat eaters concerned with antibiotics used in industrial agriculture would also have their fears assuaged.

As reported last year on this site, the price of lab-grown burgers has dropped drastically. Now a report published in Scientific Reports has found a potential silver bullet: pluripotent cells.

The word pluripotent is derived from the Latin plurimus and potens, meaning ‘very many’ and ‘having power.’ This means the stem cells have the potential to be transformed into any one of the three germ layers, including mesoderm, or muscle, bone, and blood.

The research team led by stem cell biologist Nicholas Genovese turned porcine tissue cells into a pluripotent state. One advantage of this method is that the starter material could theoretically infinitely reproduce, making one batch invaluable. It would also make a whole lot of pigs happy.

Even more importantly, the culture uses no animal serum. Up to this point animal products have been used in such gustatory experiments. Genovese’s team created a synthetic serum, which means that even in the initial stages of production no animals are harmed.

This feature is unsurprising given that the research was funded by PETA while Genovese works for Memphis Meats, a Bay Area start-up whose mission is to reduce animal suffering while battling contaminated food sources plaguing industrial farms. (If that sounds a bit too mission-driven, consider that one of the company’s founders is a pitmaster whose family owns forty-three BBQ restaurants.)

While it’s hard to tell how many animals are killed each year for human consumption, estimates range in the tens of billions. With a growing population we’re already taxing earthly resources. Methane, a potent greenhouse gas and toxic byproduct of industrial farms, is implicated in global warming. The term ‘Frankenfood’ freaks out many people and is applied to anything not perceived as natural, but if scientists can create healthy nutrition options with less suffering, we should be open to it.

Still, selling lab-grown meat to skeptical omnivores and vegetarians will take time. Beyond technique and reliability a number of questions will have to be addressed. Is the meat nutritionally balanced or will scientists continue the low-fat crusade? What ingredients are going into the serum, and what are the effects on our bodies? And, of course, what will the price be?

Genovese states that his company’s initial offering, which they hope to produce within five years, will likely be above market price for meat. But given scientific advancements in just the last few years, that won’t last. Though lab-grown meat will hit freezers as an alternative, one day it might be the only way humans are able to chow down on a burger. For this and many other reasons this development is a welcome one.