Is Not Having Children a Moral Decision?

The world's human population is skyrocketing, creating more competition and suffering. Yet few thinkers address a solution. Is there one? 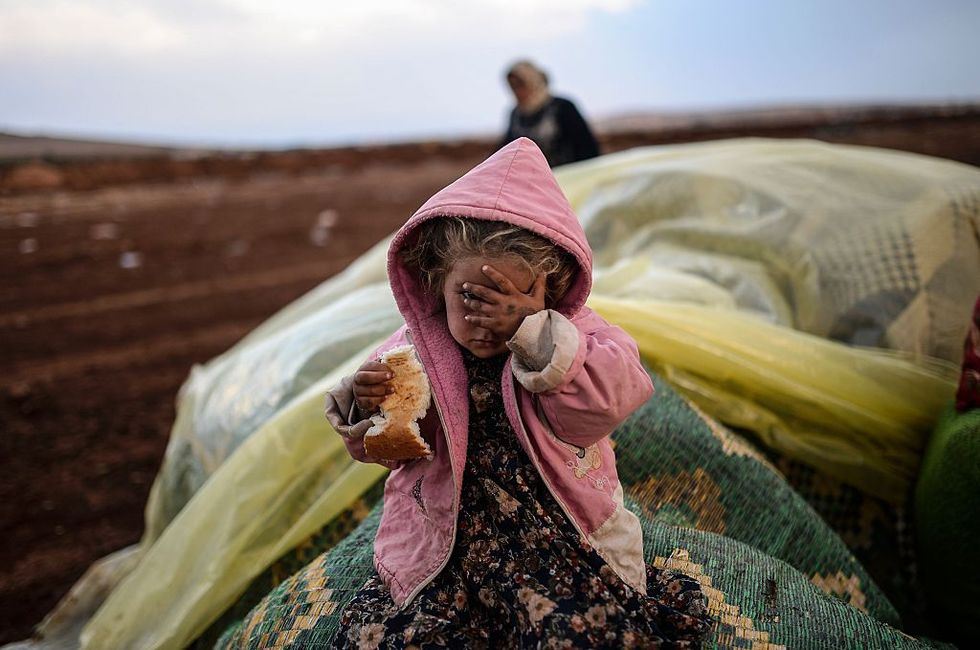 A Syrian Kurdish woman waits with her daughter near the Syria border at the southeastern town of Suruc after crossing the border between Syria and Turkey after several mortars hit both sides on October 2, 2014. (Photo: Bulent Kilic/AFP/Getty Images)

In 2015, the Atlantic published a review of a collection of essays, Selfish, Shallow, and Self-Absorbed. Each essay was penned by a male or female writer who decided not to have children. This led to a slew of positive and spiteful comments, requiring yet another article. In her review Sophie Gilbert offers an important if uncomfortable insight:

In 2015, thanks in no small part to the success of various works of fiction, it’s more acceptable to talk about wanting to be beaten by a sexual partner than it is to express honestly and openly a deliberate intent to not procreate.

One commenter noted that the selfish act, in certain situations, is actually having kids—this from a parent of two children. Anxiety, finances, sleep, responsibility, all words spoken when adults realize they’re not on Team Kids. This does not lessen their appreciation of nephews and nieces and other tots circulating in their environment. They simply don’t feel compelled to continue their lineage.

Some commented that not having children is a moral choice, an idea that’s fleshed out by University of Cape Town philosophy professor David Benatar. After he published a book on anti-natalism—no one should procreate, ever, under any circumstance—in 2006, he received notes of outrage and attack. Yet Benatar is not alone. He points to Sophocles, Schopehauer, and certain strains of Buddhism and Hinduism for context.

Ancient thinkers could not have foreseen Park Slope stroller moms or fundamentalist Christians procreating for an “Army of God” in modern America. These two groups are not dissimilar: having children shapes your identity and changes your understanding of yourself, thrusting you into a social group of like-minded parents. Once humans gather in small tribes philosophies are hardened: children are a natural part of life; rebelling against nature is criminal.

There is a biological impetus for feeling this way. Survival is the game our genes play; it’s the game all life plays. Domesticated cats and dogs and crops such as wheat and corn have humans to thank for their proliferation. Nature isn’t monolithic; it’s dynamic and fluid. Humans are part of this process, children being the vehicle to carry out this quest.

Benatar recognizes this biological conundrum and supports anti-natalism not in spite of it, but because of it:

However, it is precisely because [anti-natalism] is up against such odds that thoughtful people should pause and reflect rather than hastily dismiss it as mad or wicked.

Anti-natalism isn’t dangerous, he continues, when properly understood. Proliferation is the real problem. Consider world population: somewhere between 170-400 million were alive in 1 AD; a millennia later, pretty much the same; inching up to 600 million in 1700; a surge to 1.5 billion in 1900. Now, an unprecedented 7.6 billion a century later, with predictions of 11.2 billion by 2100. This is obviously unsustainable.

But we don’t think in billions. We think of our immediate surroundings and how great it would be to add to them. Unfortunately this mindset is adopted by much of the world, which has created an exponential increase in humans in a short period of time. The term “cancerous” is sometimes applied to our growth, which seems harsh, but given that we’ve been around for a quarter of a million years at a relatively stable population and in the span of two centuries we’ve irreversibly taxed the planet’s resources, it is also an apt one.

Benatar’s argument pivots on suffering, however. Life is a “state of continual striving,” which is our reality biologically and socially. He is no less harsh than the cancer analogy in his assumption of what that striving gets us:

Life is simply much worse than most people think, and there are powerful drives to affirm life even when life is terrible. People might be living lives that were actually not worth starting without recognising that this is the case.

He points to an optimism bias as evidence of our overestimating how grand life is. This argument must be decided individually. Yet it is true many of us overvalue our future and rewrite our past to make the narrative of our identity agreeable. Considering anxiety is the number one disorder on the planet (number two is the physiologically similar depression), and that one in six American adults are on some pharmaceutical to combat this trend, we do have to wonder what we’re facing and what we’re covering up.

Our rampant desires are in large part to blame. This too is our biological and neurological inheritance. Grasping is the demon Buddhism expels through meditation and right living, action, and mindset. Buddha recognized that once the necessities of existence are met we extend our needs, which today include fake and enhanced body parts, arsenals of designer clothing, “clean” foods, and technologies sewn into our skin. At every step more dopamine, and more dissatisfaction. When we’re dissatisfied, impulsive and aggressive behavior is guaranteed:

The harm that humans do to other humans is not restricted to the most serious violations of human rights. Daily life is filled with dishonesty, betrayal, negligence, cruelty, hurtfulness, impatience, exploitation, betrayals of confidence, and breaches of privacy. Even when these do not kill or physically injure, they can cause considerable psychological and other damage. Of such harms, everybody is, to varying degrees, a perpetrator.

If we torture members of our species, Benatar continues, we’re being completely inhuman (or maybe fully human?) to others: 63 billion terrestrial animals and 103 billion aquatic animals killed for consumption every year. He estimates every individual is responsible for the death of 27 animals every year, roughly 1,690 in our lifetime. Veganism is not the answer, as they too contribute to plenty of environmental damage.

Though Benatar claims he’s not seeking a “final solution,” he believes the planet will eventually provide one:

The question is not whether humans will become extinct, but rather when they will. If the anti-natalist arguments are correct, it would be better, all things being equal, if this happened sooner rather than later for, the sooner it happens, the more suffering and misfortune will be avoided.

While I’m personally not on Team Kids, I was troubled reading Benatar’s essay. I found myself plotting retorts. Indeed, I don’t think he gives humans enough credit for incredible acts of courage and compassion rendered on a daily basis, usually without fanfare or media coverage. Humans can be incredibly selfish animals, but with diligence and practice, we can also be incredibly selfless.

That we suffer does not mean we have to suffer—this is the wisdom of the Buddhist practice, for one. The puzzle of dissatisfaction has been with us for some time. Given the state of global politics we’re not any closer to solving it. Pretending the problem doesn't exist isn't helping.

This will continue so long as our population skyrockets. The competition for resources will increase; the desire for fulfilling desires will do the same. Bringing more life into life offers a certain amount of joy, but at what cost? Benatar’s conclusion might not be agreeable, but it should not be tossed aside without consideration. By design we’re all trees unable to see the forest, and that design is getting crowded.