Is Enlightenment the Goal? 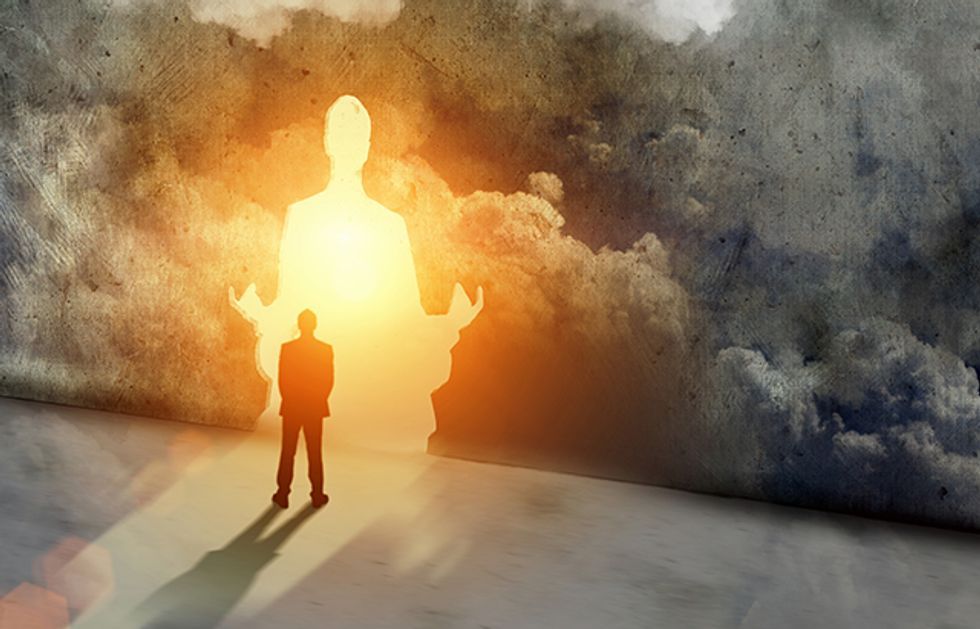 The top rung of Patanjali’s eight-limbed Ashtanga ladder, Samadhi, has been defined in numerous ways. Usually associated with the last step before enlightenment, it is translated as ‘ecstasy,’ and has a number of connotations: it can be acquired through good fortune and by devotion to one’s teacher; it is the ‘perfect forgetting’ of one’s state of meditation, the condition in which consciousness shines forth as the intended object; it can lead to ‘wondrous consciousness’ and, finally, liberation.

What liberation entails has long been debated. Liberation from what? Some argue the bondage of consciousness (citta); others, the body.The oldest extant texts of yoga treat the body as a waste vehicle for spirit. Modern yoga, rooted in Tantra’s physical celebration, sees this fleshly container as the perfect vehicle for the ‘body of light’ one transforms into.

In The Deeper Dimension of Yoga, Georg Feuerstein defines the path to Samadhi in much greater detail. He does concede that consciousness is part of the brain’s function, but

Awareness—or Superconsciousness (cit)—requires for its existence no neurons, chemicals, or atomic and subatomic particles. It is, in fact, that in which all matter and thought arises and vanishes in every moment.

You climb Patanjali’s ladder, starting with ethics and morals—traditionally teachers would not accept students who were sleeping around, stealing or exhibiting violence—before graduating to yoga postures and breathing techniques, then onto meditation and sense withdrawal, finally realizing, as Feuerstein describes it,

Our true nature as the superconscious substratum of all individual beings and their perceived environments.

There is no dearth of such mystical ideas in yoga's history. Reincarnating bodies, the ability to stop one’s heart, paranormal powers and time travel make up a sizable portion of yoga’s ancient literature. Such ideas did not slow as the practice carved its niche in America throughout the twentieth century. Only one problem emerged: we now had the means to test such claims.

As William J. Broad points out in The Science of Yoga, breathing techniques could actually account for a slowing of one’s heart rate, though it would never stop, as yogis in the past had claimed. As he notes, one of the most popular yoga texts in modern life—Iyengar’s Light on Yoga—is filled with scientific claims. The problem is that no actual peer-reviewed research was done while crafting his book.

This is perhaps part of the reason why Broad cites this passage on yoga from the Indian scholar I.K. Taimni:

There is no subject which is so wrapped up in mystery and on which one can write whatever one likes without any risk of being proved wrong.

Not that scientific claims have not held up. Research into yoga has shown that it helps lower the cardiovascular risk factors associated with high blood pressure, cholesterol and blood clotting; reduced signs of atherosclerosis; raise antioxidants in the bloodstream; and that yogis have few hospital visits, less serious coronary events and less need for drugs.

This tracking of yoga’s health benefits is significant. I know from a decade of teaching the impact it has made in many people’s lives, myself included. And I know from experience that living a healthy lifestyle helps shape views on existence in a more positive light. As Dr. John J Ratey mentioned, the greatest benefit of exercise is in how it strengthens your brain. While I've always admired Feuerstein's work, we need to recognize that neurons are indeed involved in the higher levels of yoga.

Which makes me wonder about those claims of enlightenment being the ‘point’ of yoga. If the substantial health benefits of yoga are being uncovered, and are making a qualitative difference in people’s lives—I would argue that stress reduction is among the most potent—then of what use, really, is a ‘superconscious substratum of all individual beings?’ Why is a practice aimed at creating a constant state of presence, something direly needed in a country that texts and types away while life literally passes in front of our eyes, concerned with an abstract goal of universal consciousness?

More succinctly, does this 'blissful' state of recognizing one's involvement in the totality of existence include chemical weapons in Syria, an uptick in homosexual bashing in New York City, and the myriad other tragedies that occur every day? As Dharma Mittra says, it's easy to meditate on a mountaintop. Come try it in the middle of New York City.

I lean towards Hungarian psychology professor Mihaly Csikszentmihalyi’s interpretation of this ‘final stage’ of yoga:

Samadhi and the liberation that is supposed to follow may not, in the end, be that significant—they may in one sense be regarded as the justification of the activity that takes place in the previous seven stages, just as the peak of the mountain is important only because it justifies climbing, which is the real goal of the enterprise.

Can voters really predict who will be a good leader? Malcolm Gladwell joins Big Think Live to discuss this how lotteries could, in theory, distribute leadership more effectively, from government elections, college admissions, and grant applications.