How To Achieve Enlightenment

First step: recognizing it's a continual process, says Robert Wright in his new book, Why Buddhism is True. 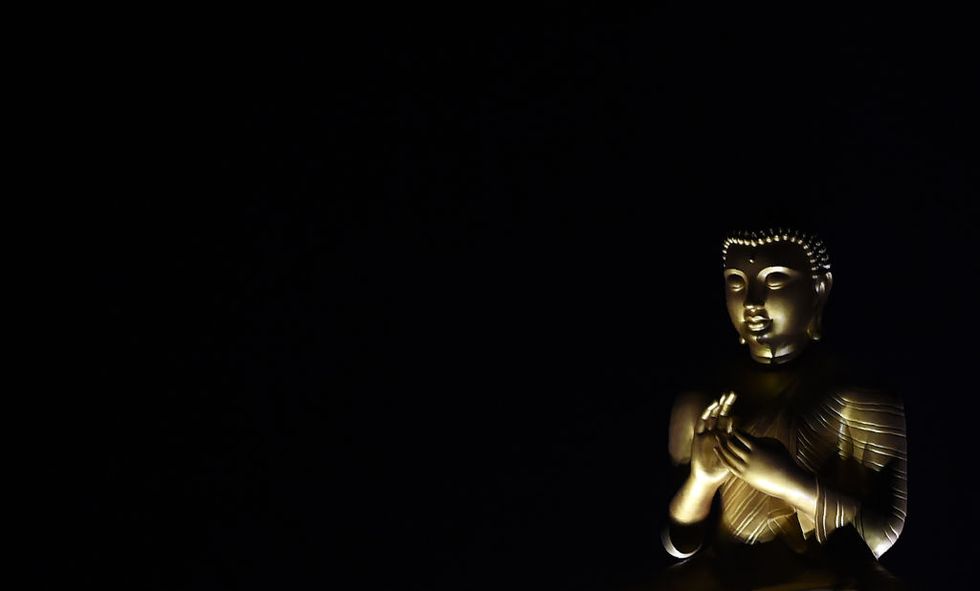 A statue of Buddha is displayed in a temple in the Colombo suburb of Kelaniya on June 8,2017, during the Poson Festival marking the introduction of Buddhism to the island. (Ishara S. Kodikara/AFP/Getty Images)

Robert Wright didn’t think of himself as a candidate for enlightenment. He had turned to mindfulness meditation, in part, to combat lifelong ADD—to focus his thoughts, give him a sense of control. So when his meditation teacher told him he could either focus on enlightenment or write a book about mediation, he was taken aback that enlightenment was even on the table.

He wrote the book, yet he hasn’t given up on liberation. Wright recounts this episode in Why Buddhism is True, which is part memoir and deep exploration of mindfulness meditation. The Pulitzer Prize-nominated journalist realized that if he was going to start a regular meditation practice he’d have to dive in. So he began his earnest quest with a ten-day silent retreat, known as Vipassana.

Once enlightenment was mentioned Wright stepped back to contemplate what that word even means. The term has a bit of ambiguity, given all of the contexts in which it’s employed. In his book, he writes that the specific sense, the meaning of nirvana, is to rid yourself of the “twin illusions” many people suffer from: illusions inside of your mind and those occurring in the world.

The illusions are the result of dukkha, a Pali word often translated as “suffering,” though more precisely implies “unsatisfactory.” In the Buddhist tradition humans suffer because they don’t see the world, or their mind, clearly. They put too much emphasis on personal desires rather than objective thinking. We get too caught up in what we crave rather than what is. Enlightenment is freedom from such thinking. As Wright told me,

As a practical manner, I think of enlightenment as an ongoing process where you try to become more and more aware of the things that are influencing your behavior. By understanding them, to the extent that you want, you try to liberate yourself from them.

A great example of this process can be heard on the NY Times podcast, The Daily. Derek Black grew up in one of the most prominent white nationalist families in America. He believed whites are genetically superior. Relationships he forged while in college taught him otherwise. Two years after attending his first Shabbat dinner he recognized his family’s overt reliance on eugenics didn’t hold water. More importantly he came to understand that members of other races and belief systems aren’t inferior. He liberated himself from his narrow thinking.

All humans learn in a similar manner. We have genetic predispositions, but our environment, family, and peers shape our worldview. As we age we apply that worldview to our experiences, suffering when conflicting opinions arise. The Buddha realized thoughts are the problem. Enlightenment is the process of decluttering, or expanding, our worldview—even, at a point, not having a worldview at all.

That’s a tall order for most, however. As Wright puts it,

Part of what can happen with meditation is you rearrange your narratives. If you want to get into the deepest aspects of Buddhist philosophy, you’re trying to get rid of narratives altogether. But I think most of us could do with just dropping the more unfortunate narratives.

Which is what Black did, and what Wright practices. An important step in this process is understanding the difference between situation and disposition. We see a man yelling at the barista one morning. Our first thought: “He’s a jerk.” Maybe. Or maybe his father died last evening. The supposed jerk is really the victim of an unfortunate situation.

Yet we don’t view ourselves this way. Since we are aware of our situation, we normally don’t apply “jerk-ness” to our own experiences, even as we readily affix it to others. This is due to a belief in essentialism: the notion that we have an inner essence that defines us. This longstanding idea has played a role in our cognitive framework for thousands of years, at least. Problem is, it’s not true. None of us have a singular essence.

We are different people in different situations. All life is situational. We’re sweet to this person, but that person really ticks us off, for no reason we can pinpoint. Our reactions are completely different, dependent upon situation. This has real-world consequences.

Incredible research shows that inmates up for parole have a 90 percent chance of receiving it if they appear in front of a judge first thing in the morning. If they’re one of the last cases of the morning session their chances drop to 10 percent. First up in the afternoon? Back to 90 percent. Why? Because the judge has eaten. He’s no longer hungry. Situation matters.

Same with students. Children and undergrads learn better later in the day. Yet for many the hardest classes are first thing in the morning. Is the child stupid for failing? Not necessarily. The science is in on this one. Yet still, as school kicks in this month, there are seven and eight am classes, because “that’s how we’ve done it.”

Which gets to the heart of the enlightenment question. “How I’ve done it” does not equate to “this is best for me.” When we confuse the two we don’t feel satisfied. Instead of treating liberation as a life-shaking, earth-quaking event, as many interpretations of the Buddha’s enlightenment have it, we can best understand liberation as a shifting of perceptions, a different way of being in the world. One in which we don’t become so invested in things going our way, but rather seeing the way things go and adapting to the flow.

This is not to say that we don't have a say. We do. According to Wright, that means a daily meditation practice. As he says, the more time you put in, the better the results.

The more you invest, the more it translates into everyday life. If I’m meditating regularly I find it easier to catch myself before doing something that I’m better off not doing, whether that’s sending off some angry email or saying something snide to somebody. You feel the impulse welling up and you’re more aware of it. I also think you’re just more appreciative of the beauty in the world.

The heavens might not open, but perhaps you can breathe a little more easily. Maybe you smile a bit more. Enlightenment is a process and a discipline. There’s no final state to achieve. Rather, it’s a state to always aspire to in all situations. A tall order, certainly, but one that puts us in control of our emotions throughout the day.

We do have means for achieving this. It just takes a bit of work to reign in the grasping nature of our mind.