Experts Call For Sugar to Be Treated As a Drug

Just like alcohol, nicotine and other narcotics, sugar tickles our dopamine receptors in just the right way, inspiring our brain’s reward system. How will this end for us? 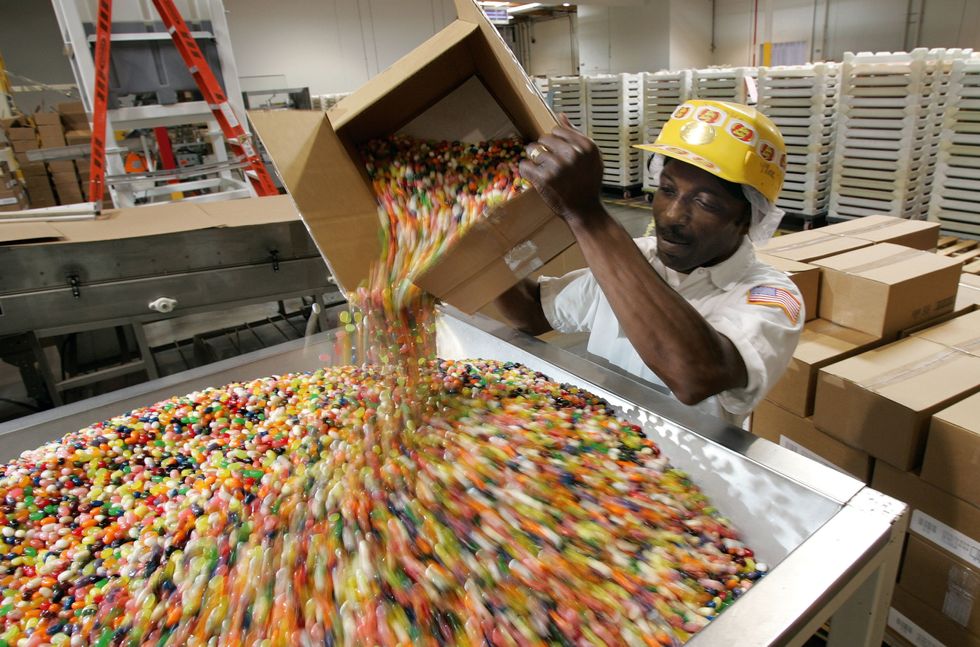 The bueberry flavor Jelly Belly bean was created for Ronald Reagan's presidential inauguration in 1981. Over three tons of Jelly Belly beans were consumed during the festivities. In hindsight, it might be something the 'war on drugs' overlooked. (Getty Im

My favorite candy growing up was watermelon Jolly Ranchers. I loathed the variety pack, as that meant I’d have to weed through options—grape, acceptable; green apple, goodbye—to savor my chosen treat. When offered real watermelon in the summer, I declined. The flavor just didn’t compete.

Is sugar a drug? The question has long been debated. Sugar tickles our dopamine receptors in just the right way, inspiring our brain’s reward system in the same manner as alcohol, nicotine, and other narcotics. And we know excess sugar is the culprit behind a range of life-threatening ailments. Even with that knowledge our consumption ticks up: 152 pounds a year if you’re American. Historically speaking that figure is mind-boggling.

No responsible parent would allow their children to eat candy for breakfast, but that doesn’t mean they’re not receiving an equivalently sweet dose in many breakfast cereals, juices, and even seemingly healthy options like oatmeal—cranberries and maple syrup anyone? The UK’s National Diet and Nutrition Survey discovered half of children’s daily sugar intake is ingested in the morning. Confusion over ‘healthy’ and ‘natural’ sugars doesn’t help. Your liver doesn’t care if sugar is organic.

Yet we need it. Our brains, little energy suckers they are, lap up sugar like hummingbirds—to a degree. In spite of much consternation and deception from the sugar lobby, the World Health Organization adopted 25 grams per day as the upper limit in 2014. Pretty much any bottle of juice or coconut water—organic, freshly squeezed, cold-pressed, and quintuple-processed included—is above that number.

Which is why children are developing similar diseases as alcoholics, and why some experts are calling for sugar to be treated as a drug. How humans decide which substances are illegal and dangerous and others acceptable and benign has more to do with politics, marketing, and social mores than science.

To combat this trend some rely on the poorly understood mechanism of ‘cleansing.’ This too has its dangers. One healthy woman on a ‘detox’ using ‘natural products’ was recently hospitalized after suffering a seizure. The culprit? Green tea, milk thistle, and valerian root.

Sugar is as natural as any of the products she was cleansing with. Whatever we ingest is potentially toxic, depending on dosage, prior health conditions, and combination with other substances. A pop tart and beer are worlds apart in structure and delivery, but your liver and spleen don’t notice much of a difference. Factor in the added sugars in condiments, nut butters, sauces, and dressings, and maintaining an acceptable level is daunting.

Interestingly sugar began as a medicine, not a food source. It spread thanks to Arab kingdoms in southern Europe, though still treated (and priced) as a rare spice. Ubiquitous today, sugar was once a lauded substance linked to slavery and colonization. Economies were fueled by it. As production ramped up thanks to British invasion of the tropics, sugar began being used daily to lighten the tannin load of tea, as well as in jams and candies such as sugarloaf—a cylindrical brick of sugar requiring a special tool called a sugar nip to break it into pieces. People were hooked.

Availability breeds addiction. Just consider what’s happened with cell phones, once a rare luxury. Like technological addiction exploiting boredom and novelty, sugar exploits an aversion to bitter flavors—or, more likely, allows us to forget a wide and varied palette is healthy. Sugar’s seduction took millennia, but when it took hold in the 19th and especially 20th century, our brains sought sweetness wherever our tongues reached.

Which is why Gary Taubes considers it a drug. Part of the problem, he writes, is that we don’t truly know how much is too much:

Once we have observed the symptoms of consuming too much sugar, the assumption is that we can dial it back a little and be fine – drink one or two sugary beverages a day instead of three; or, if we’re parenting, allow our children ice cream on weekends only, say, rather than as a daily treat. But if it takes years or decades, or even generations, for us to get to the point where we display symptoms of metabolic syndrome, it’s quite possible that even these apparently moderate amounts of sugar will turn out to be too much for us to be able to reverse the situation and return us to health. And if the symptom that manifests first is something other than getting fatter – cancer, for instance – we’re truly out of luck.

Taubes relates this addiction to cigarettes. Sure, a few a day is better than a pack, but is it really? The challenge is that sugar is prevalent in innumerable foods. Carbohydrates turn into sugar in our bodies. Alcohol is basically Naked juice. Moderation is necessary yet indefinable. This leaves room for companies, specialists, and nature-based charlatans to further confuse the issue.

Besides, is there anything wrong a little sweetness? The question is a matter of degree. But the bar keeps getting moved year after year, pound by pound, disease by disease. Taubes is a former cigarette smoker that didn’t realize life without them until he quit, just as over time I grew to love summer watermelon and abhor hardened gelatinous molds attempting to pass as a foodstuff.

Just as alcoholics often will not admit their disease, sugar addicts are blind to the ravages it wreaks. And just as some alcoholics recognize a problem but do nothing about it, turning down dessert or a midday candy seems implausible and insane. Life is too short to deny yourself pleasure, the sentiment goes, even if that life is made worse due to that quick bliss.

We may never know how much is too much. But we do know the bar needs to be lowered. Blue Hill chef Dan Barber, reviewing Taubes’s latest book on the subject, concludes eloquently:

Our job here — and not only here, but with everything from tobacco to global warming — is to override the imperfect, long haul to scientific certainty and instead follow the precautionary principle, which means recognizing what’s staring us in the face and acting on it as if our health hangs in the balance. Because it does.

Nutritional psychiatrist Drew Ramsey came to the Big Think studios recently to shed some light on a better kind of eating: