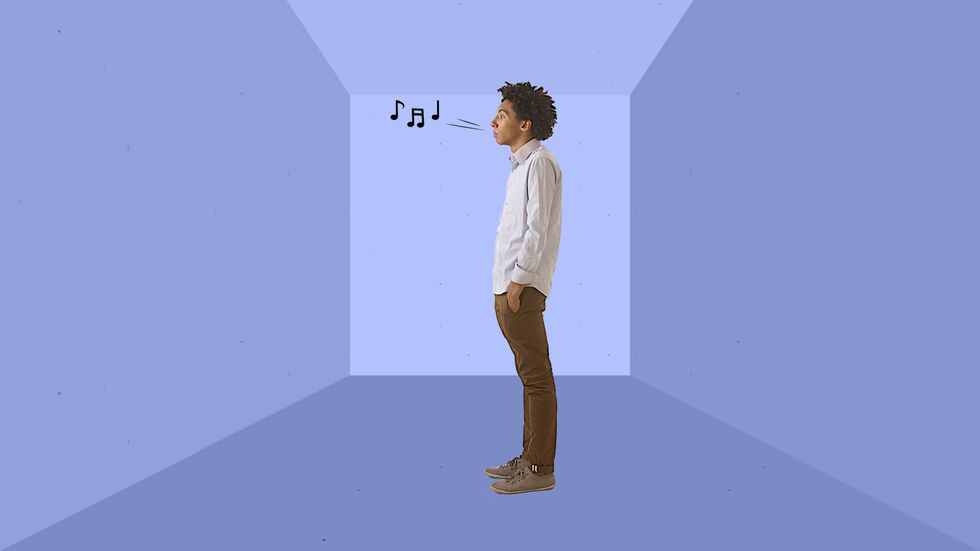 If you want to know the state of a nation, we generally look no further than online. A proper portrait, that does not yield. Look, instead, at the line in front of you, waiting for a cappuccino or to pay for groceries. Look into the cars surrounding you at a red light. Look around anywhere in the public space, except at your phone. Then you’ll get a sense of where our heads are at.

Our heads are down, perpetually angled at the screen, whenever a moment of potential boredom arises. Waiting for a meal? Barista taking too long? Or even the proper amount of time—those 30 seconds are crushingly dull. Caffeine is a secondary stimulation, a little jolt to turn your attention so that it can immediately be pulled into the innumerable waves of inattention on Instagram. Where did boredom go? What happens when we stop allowing ourselves the habit of staring into space, letting our minds wander? Instead of a deluge of constant information, can we, as Michael Harris writes in The End of Absence, “engineer scarcity in our communications, in our interactions, and in the things we consume?”

Research recently published in Personality and Social Psychology Bulletin suggests that might be a good thing. According to lead researcher Thuy-vy Nguyen at the University of Rochester, 15 minutes of device-free solitude deactivates high arousal emotions while reducing stress and promoting relaxation. Boredom has benefits.

Maybe solitude just needs rebranding. As the research team writes, it is often related to social rejection, withdrawal, and isolation, with being shy and lonely. Why suffer any of these fates when a friend can beckon you from your pocket? Yet, ironically, being virtually connected triggers many of these very conditions. We never feel so lonely as when engulfed by our virtual friends.

To set the stage in the four studies included in this research, the team writes:

We operationalized solitude as an experience of being alone without any communication with others, without any other activities, and without other types of active stimuli present. We then examined how having other people present, doing activities such as reading, or thinking particular kinds of thoughts might affect people’s experiences of being alone.

In the first study 75 students sat by themselves in a comfortable chair, while the control group of 39 students talked to a research assistant. Each group was handed a questionnaire before and after the session. Solitary individuals showed a “deactivation effect.” Both positive and negative emotions were reduced. Follow-up experiments showed similar deactivation results:

It seems solitude doesn’t have a simple emotional effect that can be caricatured as good or bad; rather, it changes the intensity of our inner experience, both positive and negative: accentuating low-key emotions, while dialing down our stronger feelings.

The same occurred with the groups that were asked to jot down evening diary entries for two weeks. Those writing after a device-free 15 minutes showed a reduction in positive and negative emotions. Is this necessarily a good thing? Not if you think reducing positive emotions is beneficial. Yet it would be interesting to know the levels of contentment that followed these boredom sessions. Did the calmness and reduced stress make the students more at ease? Is feeling content in the moment better than being joyous? It is an arguable point, considering the superfluous nature of emotions and the stability of a disciplined contentment.

The real value here appears to be affective control. Instead of being carried away by emotional responses—something the Internet, at times, seems designed for—the students who spent time alone were better able to decide how to respond to stimulation. As the team writes:

The set of studies thus suggested that people can use solitude, or other variations on being alone, to regulate their affective states, becoming quiet after excitement, calm after an angry episode, or centered and peaceful when desired.

We all need breaks from arousal, not only when sleeping. Being constantly stimulated keeps us on edge throughout our day and even affects our unconscious hours. Allowing breaks for boredom, for being alone with our thoughts, is a helpful ally to combat life’s stresses. Regulation is worth the price of deactivation. It is then we see transience clearly, better equipped to deal with the rigors of our inner terrain. In the words of the researchers: