Hallucinations are a feature of our brain's hardware. Could religious visions be accounted for by this neurological phenomenon? 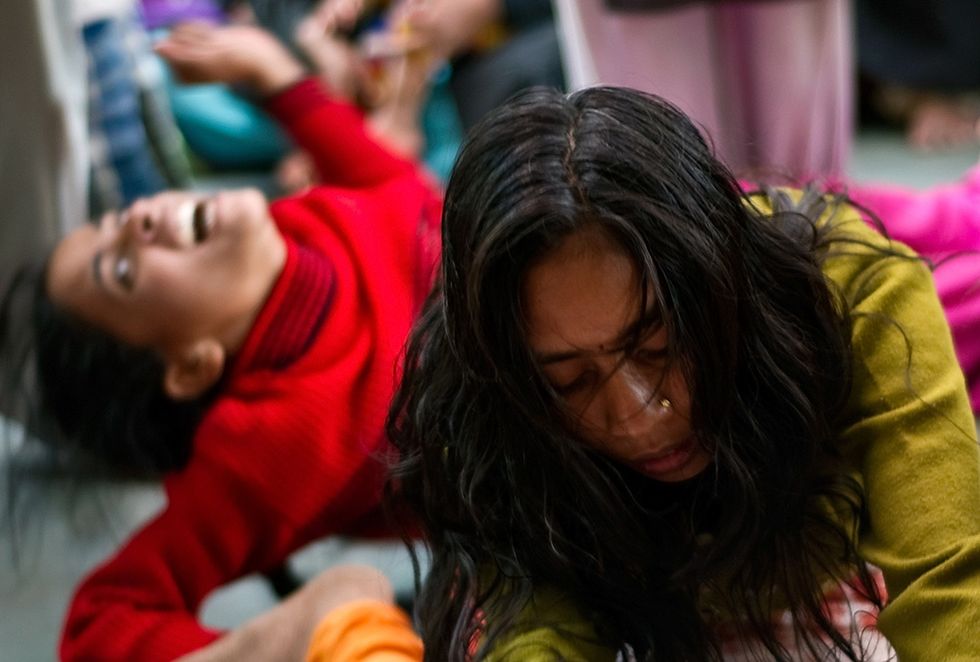 Of the many interlocking neurological and social factors that have gone into creating the phenomenon we call religion, one of the most pertinent might just be our ability to hallucinate. Hearing voices, seeing visions, and remembering events that never occurred (or foreseeing catastrophes and fantasias that never will) are all features of our neurochemical hardware.

As the late neurologist Oliver Sacks writes in Hallucinations,

Sacks cites pilots and truck drivers as two examples, people who spend hours upon hours staring at similar terrain. It’s not a stretch to imagine desert dwellers transfixed by long landscapes experiencing the same. Music producers easily fall into the audio side, which might help account for creative and psychedelic output occurring in the trance traditions of African drumming, Gnawa, qawwali, and other traditions. The visions of others captivate the rest of us.

Of the many cognitive aberrations Sacks cites in his book, epilepsy is one of the more telling in terms of religious thought—what Hippocrates dubbed the ‘sacred disease.’ The sudden onset of a seizure was, for centuries, considered proof of divine takeover, the ghost in the machine demanding its voice be heard.

Yet, like with psychedelics—another topic Sacks dissects—the ‘message’ delivered by seizures is not coherent. Many hallucinations, purposeful or otherwise, amount only to disorienting and confused moments that are only later contextualized. Our brain hates incomplete narratives. If a metaphysical entity can fill the gap, sign him up.

In order to make sense of such a startling experience, we rely on memories for inspiration—we settle on a context that is at least somewhat familiar. Interestingly, the regions of our brain that deal with memories are also activated when we contemplate the future. As psychologist Michael C. Corballis points out, in the sixteenth century the word hallucination simply meant ‘a wandering mind.’ When our minds wander, it is either forward or backward, both states removed from the present due to the same neurological real estate.

Sacks’s own usage of psychedelics is well documented. While cannabis, mescaline, and LSD were on the menu, it was an experience with Artane, a synthetic drug used by Parkinson’s patients (similar in effect to belladonna), causing his brain to wander into new dimensions. A friend suggested a hefty dose of twenty pills. He concurred.

On the Sunday morning of his exploration he was upset to find little more than a dry mouth and inability to read. Entering his kitchen he put on a kettle for tea. Two friends announced their presence in his Topanga home for breakfast, a regular custom. Sacks asked how they’d like their eggs. After their response he continued the conversation, preparing three plates.

Meal ready, Sacks entered the living room to find no ‘they.’ The morning grew stranger when a helicopter descended toward his backyard transporting his parents. Sacks had finished all three plates by this point. Excited to see his family, he showered and dressed for this sudden visit—apparently his parents had traveled from London to Los Angeles via chopper—only to find, of course, no reunion would be had.

During this time Sacks was a resident in the UCLA neurology department. He had a firm grasp on a range of neurological abnormalities; he knew the chemical reactions occurring in his brain even if surprised by the effects. His memories—in this case, reams of research and time with patients—assured him that those voices and sounds were the unique product of neurochemistry, not actual disembodied quips from a nether world. Not everyone is so fortunate. If you have no such training, that helicopter easily becomes the chariot of the gods.

Corballis notes dualism, the idea that an ethereal body lives inside the flesh and chemistry of our being, is born of our brain’s mind wandering (or, as known in science jargon, the default mode system). We are predisposed to believe that our minds are separate from the physiological and neurological processes of our body. Social psychologist Jonathan Haidt’s work confirms this as well.

Mind wandering is our brain’s most natural state. Slipping into central executive mode, complete focus, takes more work and fuel (in the form of glucose) than lying back and drifting. Navigating the space between these two modes in our era of distraction technologies is an almost insurmountable challenge. And so when something catches us off guard, metaphysics is an easy culprit.

Yet even with a vast knowledge of neurological conditions, we retain a juvenile attitude toward them. (How many heads bounce along as Kanye West ignorantly raps about shaking like a Parkinson’s patient?) As our brain also seeks a path of least resistance, a biological reason for that shadow over our shoulder (more than half of American adults believe in ghosts; three-quarters in angels) is not as exciting (or easy) as invoking an apparition. This could certainly have accounted for many religious visions.

Our imagination, the boundless product of mind wandering, is a wonderful evolutionary gift. Fueled for millennia by apparitions that only existed inside the head that witnessed it, our ancestors wrote epic tales inspired by visions of demons and gods. In the realm of fantasy these stories remain among the most outlandish and beautiful in literature. Treating them as reality, though, has created way more trouble than they’re worth.