Smoking Causes up to 150 DNA Mutations in Each Lung Cell, Every Year

The longer you roll that dice, the higher the chance that a DNA mutation spawns a cancerous cell. The researchers on this study likened it to playing Russian roulette; sooner or later, there's one in the chamber. 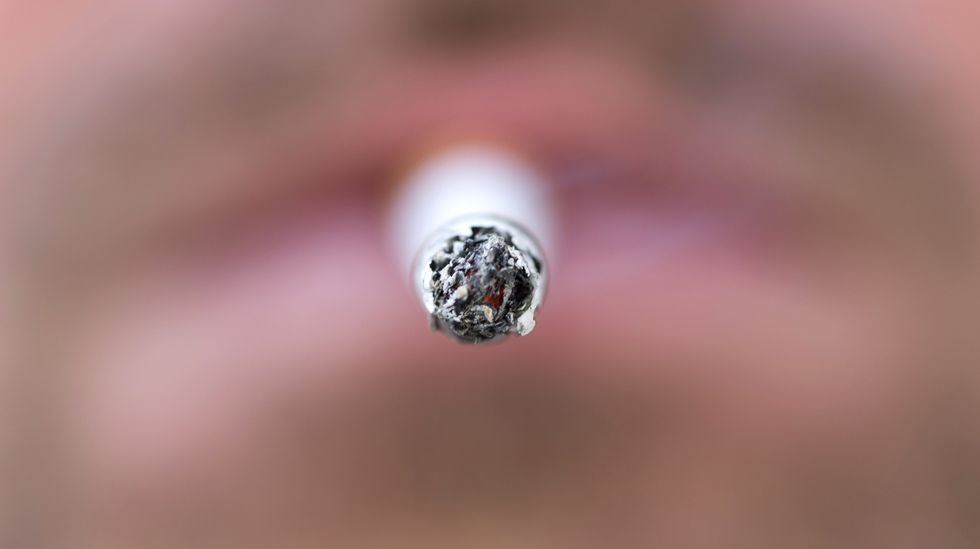 Cancer, of course, is not new. Throughout the ages societies have defined and dealt with it variously. Ancient Greeks employed the term onkos to describe tumors: mass, burden. It is an apt translation of what cancer does inside of our bodies.

In Emperor of All Maladies Siddhartha Mukherjee travels to the root of onkos. Nek is an Indo-European term that represents an active form of “load.”

It means to carry, to move the burden from one place to the next, to bear something across a long distance and bring it to a new place. It is an image that captures not just the cancer cell’s capacity to travel—metastasis—but also Atossa’s journey, the long arc of scientific discovery—and embedded in that journey, the animus, so inextricably human, to outwit, to outlive and survive.

As Atul Gawande recently expressed in conversation with musician Andrew Bird—Bird asked the doctor how cancer forms, given a severe bout his wife had recently undergone—we all grow cancer cells every day. Fortunately our bodies are designed to not let them metastasize. Then a mutant gets through, our body under attack.

Certain cancers are genetic—my testicular cancer two years ago is one such case, given a childhood condition that predisposed me to it. Yet many are environmental. More importantly, where genetics and environment meet is either a breeding ground or defense system for cancer. Cigarettes have always been the former, like letting streptococcal bacteria loose in a sauna.

A recent study published in Science reminds us just how dangerous cigarettes are. It turns out that hundreds of DNA cells are in danger of mutation in what scientists believe is impactful enough to leave an “archaeological record.”

Smoking a pack a day leads to the following number of potential mutations every single year: 150 in the lungs; 97 in the larynx or voice box; 23 in the mouth; 18 in the bladder; six in the liver. Each mutation increases the risk of cells becoming cancerous.

Every cigarette contains at least 60 carcinogens, which is why six million people die because of cigarette-related (and thus avoidable) cancers every year. Tobacco has been implicated in 17 types of cancer. While the researchers remind us that smoking is “mechanistically complex,” and there are multiple factors when considering cancer, they conclude:

Although we cannot exclude roles for covariate behaviors of smokers or differences in the biology of cancers arising in smokers compared with nonsmokers, smoking itself is most plausibly the cause of these differences.

Forty-five percent of American adults puffed tobacco 60 years ago. This is partly the result of the hundreds of millions of dollars manufacturers were pouring into advertising. The 1955 introduction of the Marlboro Man increased sales by whopping 5,000 percent over eight months. Peak consumption hit in the early sixties, with sales of nearly $5 billion in America alone.

It’s been a long, slow withdrawal. In 1956, Richard Doll and Bradford Hill began questioning the role of cigarettes in lung cancer. Today we view the Mad Men-esque nonchalance of lighting up as a romantic throwback to a better time. Yet since January 1, 1971, cigarette ads have been banned on television. That decade marked a profound turn in our understanding of just how dangerous cigarettes are.

Still, addictions persist. While Utah is just over 12 percent smokers, and California in second at 15 percent, Kentucky leads the charge with 30.2 percent of its population. West Virginia and Mississippi follow closely behind. That means over 1.3 million people still smoke in Kentucky. Even though that state doubles the percentage of California smokers, around 5.8 million people still light up on the west coast.

Mukherjee, whose brilliant book on cancer is lucid and frightening, has spent a lot of time in cancer wards around the world. In one passage he describes a fraction of the devastation:

An ebullient, immaculately dressed young advertising executive who first started smoking to calm his nerves had to have his jawbone sliced off to remove an invasive tongue cancer. A grandmother who taught her grandchildren to smoke and then shared cigarettes with them was diagnosed with esophageal cancer. A priest with terminal lung cancer swore that smoking was the only vice that he had never been able to overcome.

He then describes that even while going through this, many patients refuse to surrender their vice: “I could smell the acrid whiff of tobacco on their clothes as they signed the consent forms for chemotherapy.”

What we ingest becomes us: food, media, alcohol, tobacco. They change the structure of our DNA and therefore affect our perception of who we are. In the case of cigarettes these mutations are exclusively for the worst as they prepare our body for painful departure. Knowing the stakes to be this high, it’s baffling that this habit persists. It is a stark reminder of how little control of our habits—of our minds—we actually have. Existence is chemistry, and in this we each reap what we sow.