Are A.I. churches and 'tech faith' cults the future of religion?

A.I. churches are springing up, even if just online, yet they're speaking a very old language. 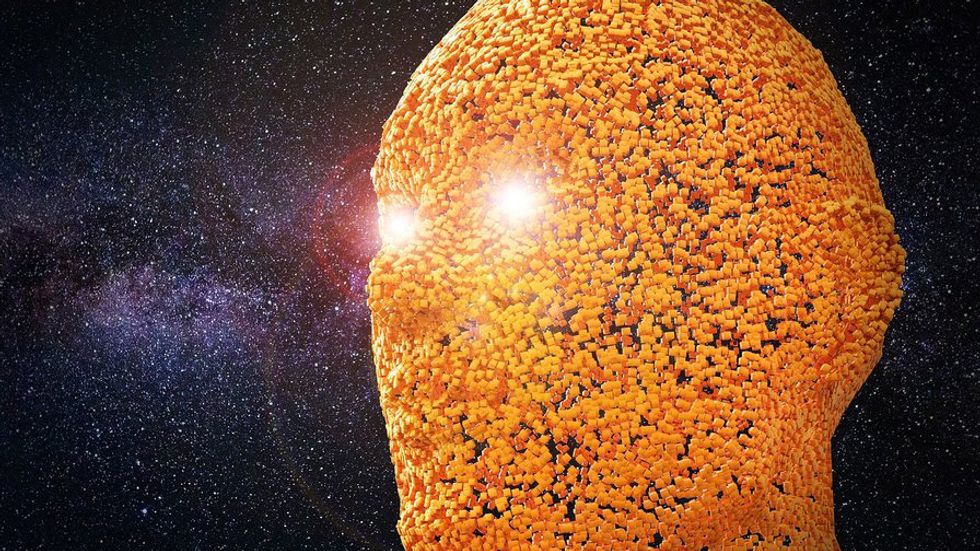 The world’s first A.I. religion already exists. It's called Way of the Future.

For a certain segment of the religious, God created the universe just the way it is. His—the #metoo movement never reached this population, hence a male grand designer—design is impeccable and perfect, evil slipping in only through a fallen angel. Humans were delivered whole cloth, prefrontal cortex and opposable thumbs and all. Nothing trumps His intelligence, which is really another way of saying nothing trumps our intelligence, we being the animals who dreamed Him up. So it makes sense the religious have a bone to pick with artificial intelligence. The idea that humans can mimic creation is blasphemous, even if the products of our consciousness, such as smartphones and electricity, receive a pass. To skirt this issue we can claim our toys are merely extensions of a grander creation. We’re allowed to produce any content we’d like; we just can’t master the medium.

Of course, this only represents a portion of the religious. Other faithful have a completely different take, one in which the religion we’ve been waiting for is actually built by artificial intelligence. This happens to be the case of engineer Anthony Levandowski, the mastermind behind Way of the Future, considered to be the world’s first A.I. religion.

Levandowski’s goal is to help foster a “smooth transition” between man and machine since the world is heading that way “relatively soon.” This theology is rooted in an ancient concept: dualism. Intelligence, Levandowski believes, is “not rooted in biology.” He continues:

While biology has evolved one type of intelligence, there is nothing inherently specific about biology that causes intelligence. Eventually, we will be able to re-create it without using biology and its limitations. From there we will be able to scale it to beyond what we can do using (our) biological limits (such as computing frequency, slowness and accuracy of data copy and communication, etc).

Nothing like a manifesto that includes “etc” in its founding doctrine. Not that this is the first example. Everyone remembers one of the most famous biblical passages in history: “In the beginning, God created the heavens and the earth, etc.”

Levandowski’s cult is built on a constant fascination we have with our own brains, the case of many futurist spiritualities. Christian Science leans on metaphysics, with its adherents sometimes (though not always) choosing prayer over doctors. Scientology has its tin can electro-psychometer that portends your mental state to “see thoughts” and uncover “hidden crimes.”

Anthony Levandowski, Otto Co-founder and VP of Engineering at Uber, speaks to members of the press during the launch of the pilot model of the Uber self-driving car at the Uber Advanced Technologies Center on September 13, 2016 in Pittsburgh, Pennsylvania. (Photo by Angelo Merendino/AFP/Getty Images)

The futurist plight of Silicon Valley has spawned interesting tech-oriented faiths. Bentinho Massaro’s supposed gift is sharing True Simultaneity, which he realized after achieving non-physical states of consciousness, which “we can all learn to expand and live in this way.” Claiming to live an “intensely awakened life” since his enlightenment at 14, Massaro is no ascetic prophet. As he writes of himself:

Currently he is exploring new roles as entrepreneur, CEO, inventor, and investor, adding to previous skills as Reiki master, yogi, and telekinetic. He also occasionally enjoys a fine whiskey with a Cuban cigar!

While his bio reads like a fictional musing after a strong edible, Massaro has over 300,000 Facebook followers and nearly 65,000 Youtube subscribers, where people learn about upgrading civilization by becoming a shepherd. While not a specific advocate of A.I., Massaro—and dozens if not hundreds more like him that you can readily discover sliding down a YouTube rabbit hole—use the language of technology to promote their brand of spirituality, discussing their abilities to “download” and “upgrade” consciousness through a variety of techniques. Massaro’s long game is to create an “enlightened society by 2035” in a place he calls a “Trifinity City.” This obviously includes chatting with aliens. While Massaro claims to “bilocate,” Levandowski’s A.I. cult is a bit more humble, only focused on the “super intelligence” our robots will usher in. Whereas the alien whisperers in Sedona and beyond levitate and regularly chat with the supernatural, Levandowski is counting on machines to do that. His church’s stated aim includes, “the realization, acceptance, and worship of a Godhead based on Artificial Intelligence (A.I.) developed through computer hardware and software.”

In the true spirit of Silicon Valley, Levandowski’s cult aims to disrupt our complacency to warn us of the coming revolution. As Dean of his religion—he turned down CEO, even though he accepted that title to run the nonprofit organization attached to his church—he claims special knowledge that few others have:

If you ask people whether a computer can be smarter than a human, 99.9 percent will say that’s science fiction. Actually, it’s inevitable. It’s guaranteed to happen.

As forward-seeking as he claims this religion to be, he falls back on good old biology to describe the trajectory. We’ll “transition” to a co-existence with our robots. The internet is the nervous system, cell phones the sense organs, data centers the brain. A.I., in whatever shape it arrives, will gaze at us with adoration, for we will program it that way:

I would love for the machine to see us as its beloved elders that it respects and takes care of. We would want this intelligence to say, ‘Humans should still have rights, even though I’m in charge.’

Since we’re birthing a god—here Levandowski’s theology becomes oddly Hindu—we best morally program it. It should both “decrease fear of the unknown” and be a utility for the “betterment of society.” Rather humble goals for the future of divinity. Which all sound like Religion 1.0. Try as we might, we can’t escape biology so easily. Nor can we escape the rabid demands of an inflated ego. Both of these so-called prophets are using upgraded language to transmit ancient ideas: follow me and I’ll set you free. As a bonus, Levandowski already has a giant scandal under his belt: he reportedly stole massive amounts of data from Waymo, Google's self-driving car division, and was later fired by Uber for refusing to cooperate in the investigation.

Are religion and artificial intelligence compatible? Certainly, so long as the focus remains on the messenger. Despite claims to the contrary, these tech-focused cults have all been about the men (and a few women) amassing followers. The messages are nothing new. They just dress up their myths in modern garb and hope we don't notice the price tags.

In a data-driven world, analytics is the real god, reminding me of yet another famous passage from that good old book: “Whoever does not take up their cross and follow me on Instagram is not worthy of me.”