A new study suggests a mental trick for making running easier. Does it work?

The authors conclude that it does, after claiming it doesn't. 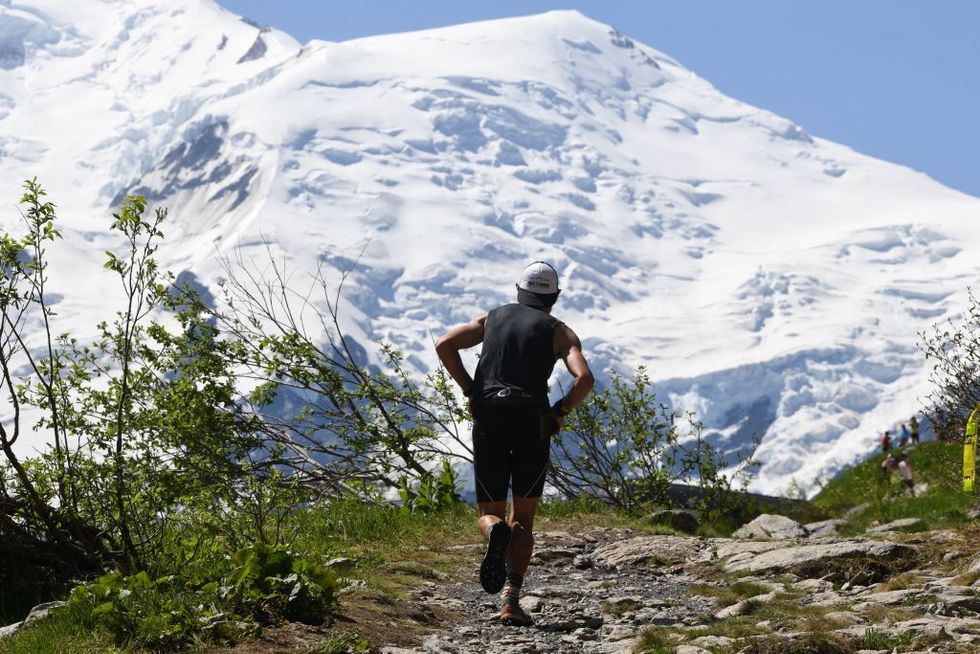 A participant competes during the 16th edition of the Marathon of Mont-Blanc, on July 1, 2018, in Chamonix. (Photo by Jean-Pierre Clatot/AFP/Getty Images)

Last week I spent two hours inside of a sensory deprivation tank. While I’ve had one-hour sessions before, two hours—which strangely felt like less than an hour—gives you time to, as the company’s slogan says, “meet your mind.” It’s also plenty of time to meet your body, as it turns out. I’ve suffered from hypnic jerking my entire life. My wife knows when I’m asleep thanks to my twitching. Usually, I’m unaware of it, though sometimes it happens while falling asleep, the result of a motor movement in a dream that jerks me awake. This happened in the tank: my mind would drift off; if in my vision I was moving, the muscles controlling that movement (throwing something; jumping) would twitch. Unlike with falling asleep, however, it was not as startling—the salt water kept me calm.

After a while, the twitching stopped. Then my mind alternated between deep states of relaxation and current anxieties, such as integrating our new cat with the previous two. Drifting in a bed of briny water, weightless and effortless, the meeting point of thought and action was magnified. Simply by switching my mindset I profoundly affected the entire state of my nervous system. This is basic physiology, of course, but in complete darkness and silence, the discrepancy between mental chatter and easeful clarity proved stark.

As relaxation goes, so does movement—including endurance exercise, as this new study proposes. While there’s a world of difference between relaxing in a salty tank and training for a marathon, your mindset affects how your nervous system responds to the environment you’re engaged with. As with my deprivation session, running for hours on end is heavily influenced by what you’re thinking about.

A runner competes during the Uluru Relay Run as part of the National Deadly Fun Run Championships on June 16, 2018 in Uluru, Australia. (Photo by Mark Kolbe/Getty Images for AOC)

The key factor in this study is “cognitive reappraisal,” which is a scientific way of achieving a mindset offered long ago in Buddhist meditation: imagine yourself as a dispassionate observer to your own body and thinking. (In Buddhism, the sentiment goes, “observing the observer.”) The researchers argue that this is different from distraction, in which you try to avoid thinking about what you’re doing. The argument is that cognitive reappraisal makes for better performance.

This small-scale study involved 24 runners, who were required to embark on three 90-minute runs, achieving 75-85 percent of their maximum heart rate. Though given no exact instructions on the reappraisal or distraction technique—they were not told what to think about—they had to rate their emotional arousal, emotional valence, and perceived exertion before and after their runs, as well as every 30 minutes during.

In the end, the runners experienced less emotional arousal and physical exertion when they observed themselves dispassionately, compared to having no instructions whatsoever. The distraction group did not fare any better than having no instructions whatsoever, which could suggest that distraction is a default setting for how many of us deal with endurance running. Yet the results turn out to be a bit murky:

Rather confusing. By the end, however, the researchers claim that, on second thought, their reappraisal techniques did pass muster. It’s a strange journey to end up where they did, verifying what they wanted to conclude: that cognitive reappraisal is a powerful method for better performance. Regardless, this study raises an important question: What should you be thinking about during your workouts to achieve optimal results?

Instructing and exercising in gyms for six days a week over the last 14 years, I’ll anecdotally add that distraction is not a good method, based on the thousands of classes I've taught. This also happens on the gym floor: members perform a set and immediately jump on their phone to text or email until their next set. Their attentional capacities are thwarted; the set is just a break between texting.

There’s no way they can achieve an optimal performance when their focus is removed in space and time like this. Ditto those treadmill runners and elliptical joggers staring at their phone the entire time. Beneficial movement patterns are sacrificed for a screen; peak workouts are impossible. Whether or not this translates to mental distractions while running is uncertain, though it would be a great area of research. Removing yourself emotionally also seems a stretch. It’s not like there are emotions over here and thinking over there. As many researchers have shown of late—Lisa Feldman Barrett, Michael Gazzaniga, and Antonio Damasio come to mind—emotions form the basis of cognition. You can pretend that you’re not emotionally engaged in what you’re doing, but it’s just pretending. Does it make for a useful mental trick? Possibly. We do fool ourselves all of the time.

I’d love to see how distraction and cognitive reappraisal hold up against immersion: throwing yourself fully into the experience and environment. Based on all we know about attentional capacities and flow states, it seems this would be the most beneficial course of action, which could also limit one’s sensations of physical exertion, which is one benefit of flow states: you don’t feel like you’re exerting much at all.

When your exercise routine, sense of identity, and environment all merge into one experience, you feel fully engaged and alive. This would likely prove the best way to approach your workouts. I'll keep a lookout for that study next.