A Lack of Dreaming Might Cause Health Problems. Here's What You Can Do.

It's not only a lack of sleep that's hurting us. A lack of dreaming might point to health problems. 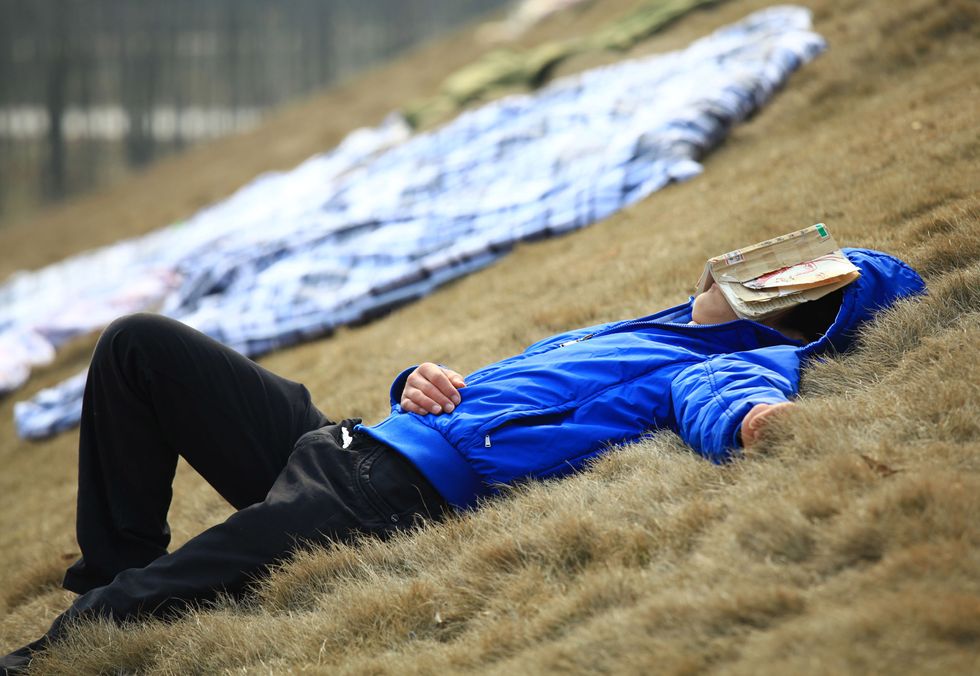 A student sleeps with a book covering his face as sheets laid on the ground are aired in the sun at Jiujiang University on March 12, 2012 in Jiujiang, Jiangxi Province of China. (Photo by VCG/VCG via Getty Images)

I often experience work-related dreams. Teaching yoga and fitness classes six days a week keeps my mind fixated on movement patterns. Sometimes new sequences are created while unconscious, which I translate the next day during class. Other nights are not so kind: I’m bombing in front of dozens of people or stuck in traffic rushing to make it to class on time—the classic work anxiety dream. While one dream is enjoyable and the other disconcerting—I sometimes wake up sweating and harried—what appears to be the most important factor is that I’m dreaming. At least that’s the word in recent research published in Annals of the New York Academy of Sciences.

Sleep and dream specialist at the University of Arizona Center for Integrative Medicine, Rubin Naiman, says being sleep-deprived, a condition affecting 40 percent of all American adults and teens, is as dangerous as being dream-deprived. General guidelines state seven to nine hours a night is the sweet spot; four out of every ten Americans achieve less than seven.

Naiman believes insomnia is not the only problem. It’s the lack of REM sleep contributing to an uptick in a variety of psychological, metabolic, and immune problems, as well as adding to our cultural attentional deficit. Poor sleep, he writes, is “inextricably linked” to poor dreaming.

Part of the problem, he continues, is the psychology industry, which has long viewed dreaming as a “subjective personal experience” even though it’s actually an “objective neurological process.” The content of dreams, which is your brain’s way of unconsciously processing your day’s experiences, might be subjective, but the act of dreaming is not. He continues:

Today, too many of us view dreams the way we do stars—they emerge nightly and seem magnificent, but are far too distant to be of any relevance to our real lives. In reality, REM/dreaming does play a crucial role in our lives by mediating our neurological health as well as our psychological and spiritual well-being.

REM sleep and dreaming play a direct role in immune function, mood regulation, and memory consolidation, as well as the more nuanced “meanings” fans of Jungian archetypes might ascribe to the content of the dreams. Factors that prohibit this type of sleep include substances such as alcohol and cannabis; OTC medications and REM-sleep suppressive prescriptions; sleep disorders; lifestyle factors, including too much blue light from devices; and a negative attitude toward the value of dreams. Naiman spends a fair share of his research discussing the scientific consequences of each of the above, though the most fascinating is the devaluation of dreams. He writes that this is in part due to psychotherapists assigning less value to dreaming and meaning with their clients; he suspects this ignorance of the dream process offers us clues as to why a majority of the emotional content of dreams is “negative if not nightmarish.”

Among the consequences of reduced REM sleep and dreaming is increased inflammatory responses, increased sensitivity to pain, increased risk for child and adolescent obesity, and memory difficulties that could lead to dementia and Alzheimer’s. Sleep behavior disorder is linked to increased risk for Parkinson’s disease and dementia as well; this disorder is also implicated in cardiovascular disease, diabetes, and depression.

Not only focusing on what got us here, Naiman offers a list of solutions:

The costs of sleep deprivation are steep. As we figure out how to meaningfully rest as a culture dominated by devices, lights, indoor climate control, and all the other supposed luxuries we take for granted, REM sleep and dreaming needs to be part of the conversation. Dreams have always confounded and inspired us, serving as metaphors for the greatness we can achieve during life. Much is lost when we stop having them.