We all carry around a little physics laboratory in our heads. As we move around the world — climbing up stairs, lifting packages from Amazon, or riding our bicycles around corners — we use that internal view of physics to give us our intuitive feeling for what the world is made out of and how it should behave. That is why it should come as something of a shock to learn how deeply and profoundly wrong that internal physics lab is about the fundamentals.

The world, fundamentally as seen through physics, is not how we imagine it to be from everyday experience. Nowhere is this failure of our internal physics labs more apparent than in the story of light and its wave-particle duality.

The dual nature of light

The question of exactly what kind of “thing” light is — what we call its ontology — dates to the beginning of modern physics. Both Descartes and Newton argued that every beam of light is really composed of tiny particles moving at high speed. The particles get emitted at the light’s source (like the surface of the sun or the flame of a candle) and travel along straight line paths (except when bent by the influence of the medium through which they traveled) until they get absorbed by matter (like the retina of your eye).

Despite Newton’s genius, others were not so convinced that light was made of particles. Around the same era as Newton, Christiaan Huygens proposed that light was really waves of energy moving through a background substrate or medium, just like waves moving through water or sound waves moving through air. When waves propagate across the ocean, for example, they do not carry individual water “particles” (that is, molecules) along with them from one place to another. Instead, the waves propagate through the water by sloshing H2O molecules back and forth as they pass.

Now, it is important to see how different the “particle” concept is from the “wave” concept for physicists. They are pretty much polar opposites, sort of like life vs. death, on vs. off, or pregnant vs. not pregnant. A particle is a little chunk of stuff that can only be in one place at one time (think bullets whizzing along a trajectory). A wave, however, is a distribution of energy that once emitted can spread out to fill space, being many places at once. Waves can also bend around objects as they travel. Bullets can only go through objects or be stopped by them.

While Newton’s particle concept of light held sway for a while, by the end of the 1800s, waves had won out. James Clerk Maxwell developed a powerful theory predicting that light was nothing more than waves propagating through electromagnetic fields. Experiments confirmed Maxwell’s predictions, opening the era of radio technology and many other applications. The mystery of light’s ontology seemed to be solved.

Nature and light, however, had other ideas.

The paradox of light 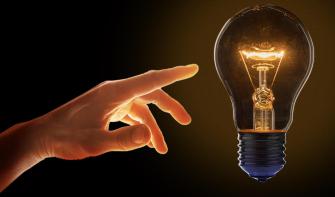 Quantum mechanics, one of the greatest revolutions in physics, began with light. As physicists built new instruments probing the ever-smaller distances and timescales associated with atoms, they struggled to make sense of the interactions between matter and light. There was the “classical” view of electromagnetic waves getting emitted or absorbed by electrically charged particles of matter. But that theory failed spectacularly to explain what physicists were finding in their experiments. The math just did not work.

So, in a burst of creative desperation, physicists returned once again to imagining light as a particle. To explain what they saw in their atomic scale experiments, they built new models where light came in discrete bundles — little packages or particles of light energy they called photons.

“But wait a minute!” you may be asking. What about all those experiments that showed light behaved like a wave, spreading out through space and bending around objects? Physicists could not ignore them any more than they could ignore their new studies that demanded light behave like particles.

Wave-particle duality was the beginning of a sea-change in how physics was done. Forced by experiments to become far more flexible in how they viewed reality, physicists began moving from easy-to-picture-in-your-head models to far more abstract, though still mathematically rigorous, views. Forget trying to picture what light is exactly like. That may or may not be possible.

Instead, imagination was propelled beyond “image,” and the world was allowed to speak to us in new ways that still demanded reason in the form of mathematics but did not demand pictures. A century after the quantum revolution, we are still trying to understand what this wave-particle duality is really telling us.

What we can be sure of though is that the world is far weirder and more interesting than that little physics laboratory in our heads — the ones based on everyday experience — would have us believe.

Washington believed that particular Thanksgiving in 1789 was a crucial occasion.
Up Next
Strange Maps