Yeah, yeah, yeah, I know: Best science fiction show ever. That is a pretty audacious claim and it means I’ve got some explaining to do. But with 58.5 years of nerdom behind me, including years of watching “Star Trek”, “UFO”, “Space 1999”, “Battlestar Galactica” (the original one that sucked except for the special effects), “Stargate”, “The X-Files”, “Farscape”, “Battlestar Galactica” (the new one that didn’t suck) and Firefly I have seen a thing or two concerning science fiction on TV. That’s why I’m here ready to stand my ground and proclaim for all nerdom to hear…

“The Expanse” is the greatest science fiction TV show ever. EVER!

For those of you who don’t know, “The Expanse” is a series that’s run on SyFy and Amazon Prime set about 200 years in the future in a mostly settled solar system (slight spoiler alerts follow). Based on an amazing book series by SA Corey, in this future there are three major political factions in constant conflict with each other. First, there is Earth which remains powerful but is stretched thin by climate change and overpopulation. Then there is Mars, a former colony of Earth, that’s now an independent militaristic republic whose technology generally outpaces that of humanity’s homeworld. The final faction is “The Belt” which refers to the asteroids and moons of the giant planets. Belters are resource extractors, and they are the oppressed underclass. After generations living on ships and in low-gravity environments, their bodies have changed, making it impossible for many of them to handle the crush of gravity on the inner planets.

The story begins with all three factions at each other’s throats. Mars and Earth are in the midst of a long cold war that, occasionally, turns hot. What Earth and Mars have in common, however, is keeping their boot on the neck of the Belters who are, themselves, poised for bloody rebellion. This simmering political, social and military conflict would be enough for a hundred episodes but it’s into this pile of dynamite “The Expanse” drops an alien artifact that changes everything and propels the narrative.

Now, the individual elements in what I described above are not really that original. You can find many versions of them in many TV shows across many decades. So, what does “The Expanse” do with these elements that makes it so special? For me the excellence of the show manifests in three distinct ways: characters and acting; universe building; science.

The level of attempted scientific realism in the show is wonderful, extending even to little details like how whiskey spirals out of its bottle due to the Coriolis effect when poured on a rotating space station.

Let’s start with characters and acting. No matter how good your science fiction ideas may be, you have to tell your stories through actors pretending to be characters interacting with each other. By its nature, science fiction shows can ask a lot of actors. They have to stare at green screens, pretending to be in awe of an alien mothership that won’t get added till post-production CGI; or they dangle from wires emoting through a screen set in the weightlessness of space. It takes serious acting chops to maintain the gravity (or levity) that makes it all believable or better yet relatable. That’s why the depth of performances in The Expanse is its best surprise. The recent season, for example, had actor Dominique Tipper killing it across three episodes as Belter engineer Naomi Nagata. Nagata is caught alone on a booby-trapped ship, exhausting herself trying to signal her friends to not attempt a rescue. It’s a solo performance reminiscent of Tom Hanks’ great work in “Castaway”.

Across the seasons, other actors have also filled out their characters with an empathy that’s comparable to anything else in any other genre on TV. Thomas Jane’s detective Josephus Miller was an epic noir depiction of a man broken by circumstance but still moving towards something better. Shohreh Aghdashloo’s foul-mouthed UN leader Chrisjen Avasarala is a skilled politician who will kick your ass and save your world at the same time. And, perhaps best of all, is Wes Chatham‘s Amos Burton. Born in the worst the streets can offer he became a killer then escaped to become a spaceship mechanic. Chatham plays Burton as simultaneously dangerous, kind, and slightly bewildered, always wanting to do the right thing if he just knew what that was. And don’t even get me started on how good Cara Gee is as Belter captain Camina Drummer.

Next, we come to what’s called ‘universe building’ in science fiction. All the great acting needs a fully fleshed out, lived-in world to ground it. How, for example, do the trams work on a hollowed out, spinning asteroid like Ceres that’s used as a space settlement? This isn’t a physics question. Instead, it means if you arrived on Ceres, where would you find the tram station? What do the maps look like that would help you get around? These are the kind of details that fall both to the writers and the art department. Getting these details wrong means the world your show inhabits will either look cheesy or, worse, sterile, as if all your expensive sets never had anyone live in them.

Happily, everything in “The Expanse” looks lived in. Everything looks like part of an organic whole. The sets and scenes give us a world built by humans for human purposes even if it’s a city built into the side of a Martian cliff. From visions of New York City under siege from climate change to the claustrophobic interiors of Belter ships (all webbing, ductwork and grimy computer screens), the universe of “The Expanse” is endlessly rich, interesting, and believable (Adam Savage has a great set of videos on production design in “The Expanse”).

Finally, we come to the science, because, after all, this is science fiction. I am not one who demands that my science fiction always get the science right. What matters is that the writers create a self-consistent universe where whatever “science” is invoked remains constant as constraints imposed to provide obstacles and make the story work. But, to my joy, for the most part the “science” used in “The Expanse” is the science I teach in my physics classes. For example, there is no imaginary “artificial gravity” babble. Instead, there is thrust gravity when the engines are on, accelerating spaceships. There is also spin gravity when you’re on the inside of something rotating. Other than that, you are “on the float.” Just like what will happen in real spaceships and space stations in the future.

The level of attempted scientific realism in the show is wonderful, extending even to little details like how whiskey spirals out of its bottle due to the Coriolis effect when poured on a rotating space station. Most importantly, the writers use the real physics real people will really encounter in real space travel as a kind of extra character in the show. During space battles, as ships roll and pivot, Newton’s first law (inertia) means unsecured tools are sent flying across the cabin. That makes them dangerous projectiles our brave heroes must dodge while fighting evil and advancing the storyline. It all makes my physicist’s heart weep in gratitude.

Of course, not all the science in “The Expanse” is valid or accurate or correct. But that’s OK. No other show I know of manages to use real science so adeptly in the service of its story and its grand universe building. I often rewatch episodes of “The Expanse” just to get a sense of “Oh yeah, that’s how it might look.” In a way, the show is the best vision I’ve ever seen of a space-faring future that may be just a few generations away. 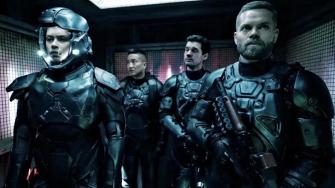 Now, I get it if you don’t agree with me. I love “Star Trek” and I thought “Battlestar Galactica” (the new one) was amazing and I do adore “The Mandalorian”. They are all fun and important and worth watching and thinking about. And maybe you love them more than anything else. But when you sum up the acting, the universe building, and the use of real science where it matters, I think nothing can beat “The Expanse”. And with a Rotten Tomato average rating of 93%, I’m clearly not the only one who feels this way.

Scallop shells have accompanied pilgrims to and from Santiago de Compostela for centuries, for more than one reason
High Culture

The artifacts were often made from found objects – an Ivory dish-soap bottle transformed into an earthenware figure.
The Future

How drugs, demons, and the search for immortality gave us words we use everyday.
High Culture

Successful forgers are remembered as great conmen, not artists. This is strange, considering their forgeries fooled even the most seasoned critics.
Up Next
Critical Thinking

Don’t let your business become anti-human: Watch for these 2 dangers.

Anti-human business practices deteriorate their charges, and there’s perhaps no greater warning of this end result than the life of Swedish industrialist Alfred Nobel. Nobel invented dynamite in 1867 with […]