Around the world, more people are on the run, and that's a healthy trend. 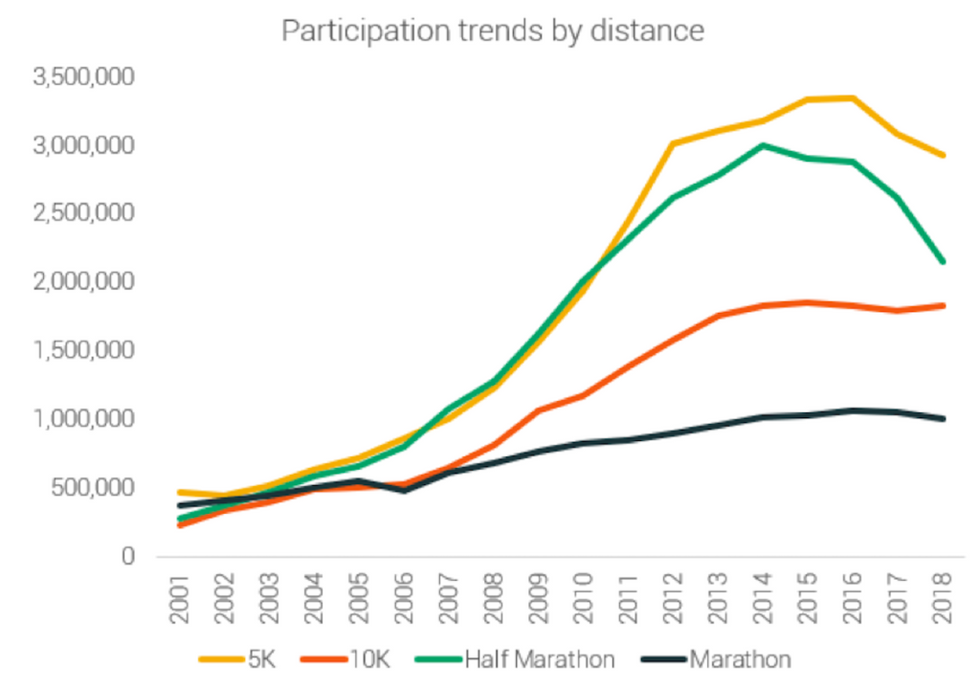 Leave it to modern-day huge data banks and the speed of data mining and statistical analysis to set the record straight.

Statistician Jens Jakob Andersen, founder of RunRepeat.com, and mathematician Ivanka Nikolova have published what amounts to the “largest analysis of race results in history," in collaboration with the International Association of Athletics Federations (IAAF). The study collects 107.9 million race results from more than 70,000 races, mapping trends from 1986 to 2019, excluding elite athletes. And it has some surprising findings.

The data covers 96 percent of U.S. race results, 91 percent of the results from the EU, Canada, and Australia, and a big portion from Asia, Africa, and South America. All 193 UN-recognized nations are included. Data collection was done through databases of race results as well as individual Athletics Federations and races sharing race results.

The most interesting result for the general amateur is that runners are getting slower. At first sight, this may seem to be a bad thing. But it really isn't; it means that more people are running, and that means a slower average pace. People aren't running to win or even very competitively. They are running to get or stay healthy, to be challenged, and for the social aspects of belonging to the running community.

Getting physically and emotionally healthy through running has become a global trend, even if there is a small overall decrease in the number of runners since 2016. (But this recent decrease in runners of traditional races is probably due to something else, as I explain below.)

As an example, take participants in 5k races. From 2001 to 2016, the number of runners rose from 500,000 to 3.5 million, a sevenfold increase. In the same period, the number of marathoners approximately doubled, from 450,000 to plateau at about one million, while the average finishing time fell from three hours and 48 minutes to about four hours and 30 minutes.

The study shows a slight decrease in the number of runners since 2016 (the exception seems to be 10k races), but I suspect that even this huge database doesn't do complete justice to the astronomical number of races, big and small, out there. And, I conjecture, the overall drop may be due to the emergence of a new racing phenomenon in recent years, the explosive participation in obstacle course races (OCR), Iron Man, and ultramarathons.

Something interesting is going on with the long-distance runners, which relates to what I wrote here recently about pushing the limits of human endurance. Quoting from the Andersen-Nikolova study:

10 years ago, running a marathon was the ultimate goal for many athletes. Not many did it. It attracted a certain audience. Then a group of less experienced athletes joined the pack and proved that they could do it as well. The trend kept going, and at some point, the extreme athletes did not find the marathon extreme anymore. They did not feel special, which was an important element of running the marathon. Because of this, the ultramarathon, trail running, the Ironman and so on exploded in popularity.

This point was made recently in a study published in The Atlantic, that related the decline in marathon runners to the rise in popularity of Spartan and Tough Mudder races. Since 2010, the two races have reported 5 million and 3.5 million total participants, respectively. Having run both long Spartan races and marathons, I can attest to the very different level of overall fitness required in OCRs as compared to road marathons.

Another noteworthy point in the Andersen-Nikolova study is the remarkable increase in the number of women runners, which now surpass male runners in the world. The U.S. is second only to Iceland, with 58 percent of runners being women. Surprisingly, Switzerland, with the fastest women marathoners in the world, has very low female participation, only at 16 percent. Runners are also getting both younger and older, with the age distribution widening on both ends of the spectrum, peaking roughly at around 40 for all genders.

Despite the increases, the number of runners as a percentage of a country's population remains quite dismal. Ireland leads with 0.5 percent, followed by The Netherlands and the UK with 0.2 percent. The U.S. hovers at 0.1 percent, together with many countries in Europe. This means that only one person in a thousand take on any kind of racing from 5k to marathons, still quite a low ratio.

Taken together, the study shows that runners are going through a substantial diversification in gender, age, and nationality, while nontraditional races are growing in appeal. Even if some signature races like marathons have seen some decline, more people are running overall, in more countries.

Once the hard competitive edge is taken out of running, more people feel that they can participate and have a meaningful experience. Finishing the challenge on the road or on the trail builds self-esteem, becoming a symbol of achievement for many other obstacles in life, with or without running shoes on.

The post Running for Good appeared first on ORBITER.