Peering deeper into the cosmos

Multi-messenger astronomy further widens our window to the universe. 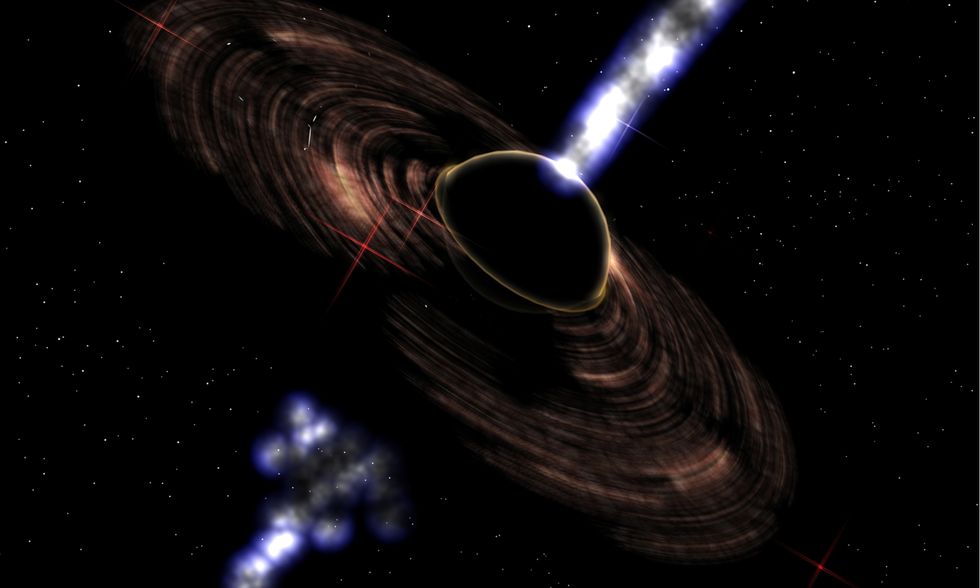 “All philosophy is but the product of two things: curiosity and shortsightedness. The problem is, we want to see more than we can."

He was right on. We can tell the history of science as a concerted effort to expand our views of the world, opening new windows to physical reality: telescopes for the very large, microscopes for the very small, and a plethora of their descendants that scientists use in their everyday research. Instruments are tools to sate our curiosity and improve our shortsightedness. The better and more precise they are, the deeper we can see into the nature of things.

When Galileo pointed the telescope to the skies in 1609, our view of the cosmos was enlarged in ways no one could have predicted. Galileo saw features that were previously inaccessible to the naked eye, things that helped change the then dominant Aristotelian worldview of an Earth-centered universe: mountains and craters on the moon, phases of Venus, four moons orbiting Jupiter, sunspots, etc. After Galileo, telescopes grew bigger and more powerful, and the cosmos proved to be every bit as amazing and surprising as one had hoped.

Roughly up to the mid-twentieth century, most of the information astronomers gathered from the skies came in what we now call the “visible" electromagnetic spectrum, that is, the kinds of light that our eyes can see, bracketed between the colors of the rainbow, from red to violet. We can think of telescopes as “light buckets," instruments capable of capturing the light created by a variety of different physical phenomena—from Jupiter and its moons simply reflecting sunlight, to the dramatic dance of matter and radiation near black holes in distant galaxies.

In recent decades, we have witnessed an enormous expansion of our telescopic capabilities, with instruments that can capture all kinds of electromagnetic waves beyond what our eyes can see: from long wavelength to short, the list includes radio waves, microwaves, infrared, ultraviolet, X-rays, and gamma rays. Each of these kinds of radiation is generated in specific ways—for example, as matter is churned inside stars or as very distant sources get their energies “redshifted" (wavelengths get stretched) by the expansion of the universe. Usually, the shorter the wavelength of the radiation, the more dramatic the event that generated it, although, for distant sources, the drama may be attenuated by the cosmic stretching.

Until a little over two years ago, that was all we could do with astronomy (which is quite a lot indeed!)—observe objects through the range of the electromagnetic spectrum. Then, in September 2015, a completely new window to the skies was opened with the first detection of gravitational waves, the very subtle wiggling of space due to some formidable event involving extremely powerful gravitational fields. The first detection was from a collision of two huge black holes, with 36 and 29 solar masses.

A few other detections of black hole collisions followed, until another new window was opened in October 2017, of a collision of two neutron stars. It's good to recall that black holes, neutron stars, and white dwarfs are the three possible remnants of dying stars. The fate of a star (that is, what kind of object it will become after it exhausts its nuclear fuel) depends on its mass. Our sun, being a relatively light star, will become a white dwarf in about five billion years. Stars about eight to twenty times the mass of the sun end up as neutron stars, while heavier stars become black holes. (There are many technical subtleties with these ranges, but they give the reader an idea.)

The neutron star collision was exciting on a couple of fronts. First, it was the first time gravitational waves were measured from this kind of event. And second, the collision and its aftermath was observed in electromagnetic waves across the whole spectrum (from radio to gamma rays), combining information from 70 telescopes around the world and in space. This joint observation started a new kind of astronomy called “multi-messenger astronomy"—the messengers being the vibrations of space and the many kinds of radiation (light) the collision produced. Astronomers could now see the universe jointly through gravitational waves and electromagnetic radiation.

A week ago, it was with great excitement that astronomers and physicists celebrated the first joint observation of another kind of multi-messenger event, now combining electromagnetic waves and particles that traveled all the way from their distant source to Earth. Such particles, known as cosmic rays, rain down from the skies continuously. Usually, they consist of protons, electrons, or light atomic nuclei coming from the sun or, occasionally, from more exotic and distant sources.

Another particle that takes active part in this cosmic ray bombardment is the elusive neutrino. With very tiny masses and no charge, neutrinos (they come in 3 types) are notoriously difficult to detect; they're often called ghost particles for their ability to go through solid matter without a single collision. Every second, billions of neutrinos traveling from the sun go through your body, without you having a clue that this is happening. Talk about shortsightedness.

The new multi-messenger observation involved a blazar, the name given to a giant black hole in the center of a galaxy and its surrounding region, rich with tremendous amounts of radiation, particles, and very strong magnetic fields. Think of a rotating disk of stuff (the matter around the black hole) and a pencil going through its center (the magnetic field). The magnetic fields focus the electrically-charged particles surrounding the black hole, accelerating them away at tremendous speeds. Neutrinos are created as these particles collide and radiate their energies along the way. If the beam happens to point in Earth's direction, we get to detect it and, if we are lucky, some of the particles coming from it.

On September 22, 2017, a neutrino hit the IceCube Neutrino Observatory, a detector buried under the ice in Antarctica. The amazing thing here is that this neutrino had an enormous energy, about ten times that of particles in our most powerful accelerators. IceCube scientists sent an alert to other astronomy groups, including the approximate location of the neutrino source.

A few days after the IceCube detection, X-ray and gamma-ray telescopes confirmed emission from the same location as the super high-energy neutrino. A few days later, both optical and radio telescopes confirmed the source as a blazar about 4 billion light years away from Earth. This means that this particle traveled for about 4 billion years before it hit the ice in Antarctica. For perspective, when the neutrino left the blazar, Earth was still a baby, a churning inferno of boiling rocks and gases.

In just three years, astronomers joined forces with gravitational and particle physicists to produce a new way to look at the skies. Networking different instruments to observe celestial phenomena is now the norm, each one giving a piece of the puzzle to help create a clearer map of reality.

If this pace of discovery continues, we should be in for a very exciting decade ahead of us, no doubt full of unexpected surprises.

The post Peering Deeper into the Cosmos appeared first on ORBITER.