No such thing as “now”

The present? Blink and you'll miss it. And other musings on time. 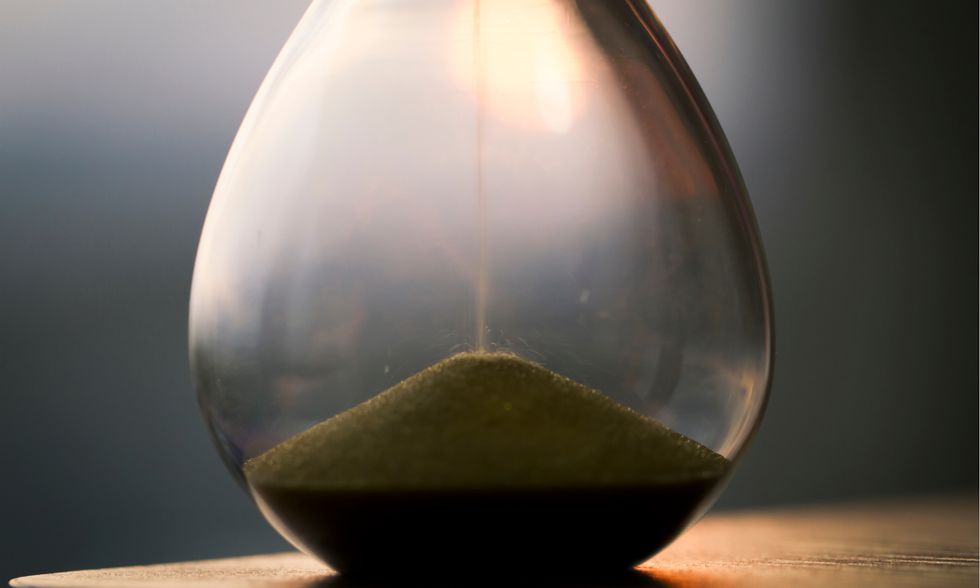 “Time doesn't stop." We all say this, and yet we hardly ever stop to think about the meaning of time and its passage.

Time is one of these deeply stirring topics, the kind we tend to push aside and prefer to forget. After all, to think about time—and how quickly it passes—soon leads to thoughts about death. This is the essence of the human predicament—to be aware of the passage of time, to know that our days on this planet, in this life, are finite.

Still, we must think about the nature of time, and physicists, far from being morbid folks, do that a lot. We tend to split time into three segments—past, present, and future. As everyone knows, past is what comes before the present, what “was," while the future is what comes next, what “will be." This split seems obvious. But it isn't. It's more of an operational definition than something that, under more detailed analysis, stands. We need the present to define the past and the future. But what, exactly, is the present?

Whatever is defined in time needs to have duration. But what's the demarcation point between past and future? The present is as thin as it can be. In fact, mathematically, we define the now as a single point in time. This point is an abstraction and, believe it or not, it has no duration. Ergo, mathematically, the present is a point in time with no duration: the present doesn't exist! Our minds create the feeling of duration so that we can attribute reality to “now." (Here's a TEDx talk explaining how this works cognitively.)

Time is, essentially, a measure of change. When all remains the same, time is unnecessary. That's why it is said that there is no time in Paradise: no change, no time. But if we need to describe the motion of a car, or of the Moon around the Earth, or of a chemical reaction, or of a baby growing into a toddler, we need time.

Near the end of the seventeenth century, Isaac Newton defined what we call absolute time, a time that just flows steadily like a stern river, the same for all observers—that is, people or instruments taking measurements of things moving about. Early in the twentieth century, Einstein argued that this notion of time is a crude approximation to what really goes on. Time and duration, he said, depend on the relative motion between observers.

Einstein and the train station

A famous example is the definition of simultaneity, when two or more events are said to happen at the very same time. Einstein explained that two events that happen simultaneously for an observer A, happen at different times for an observer B in motion with respect to A.

Einstein, living near the train station in Bern at the time, used trains to illustrate. Imagine A is standing by the station as a train goes by. When the train is exactly half way through, two lightning strikes hit its front and back. Observer A measures the time it takes for light from the strikes to hit her and concludes they did it at the same time: they were simultaneous. Observer B, however, was inside the moving train. To him, the lightning striking the front came to him before the one hitting the back. The reason is simple, Einstein suggested: since light travels at the same speed no matter what (and this was his revolutionary assumption), and the train is moving forward, the lighting hitting the front would have a shorter distance to travel and, hence, would come to him before the strike in the back, that had to catch up with the moving train.

Now, for normal train speeds, the difference is ridiculously small. That's why we don't notice such things in ordinary life. And that's why Newton's approximation of absolute time, irrespective of the observer's motion, works for everyday stuff. But as speeds increase and get closer to the speed of light, the differences are noticeable; and have been measured countless of times in laboratory and other experiments, confirming Einstein's special theory of relativity. Time, and its perception, is indeed quite subtle.

Einstein didn't stop here. Ten years later, in 1915, he published his general theory of relativity, showing that once we include accelerated motions, we must rethink gravity and the nature of space and time altogether. In a spectacular display of intuition, Einstein noted that gravity mimics acceleration (like when you go up and down a fast elevator and feel your “weight" changed). He realized that to understand accelerated motion with a constant speed of light was equivalent to describing gravity as the bending of space and time. (“Bent" time means its ticking is either slowed down or increased by gravity.)

Very roughly, whenever there is a gravitational pull, it gets harder to move away from it. Even light is affected, not in its speed but in its wave properties, becoming stretched out as it moves away. If you think of a light wave as a kind of clock (count how many wave crests pass by you per second, for example), you see that gravity decreases the number of crests going by. The stronger gravity is, the fewer crests you count. This kind of reasoning applies to any sort of clock, and it translates into saying that gravity slows time down. (For more, you can see my book, The Dancing Universe, or check out this explanation of gravity and time. It is not as hard as it seems.)

So, both in what we can call cognitive time, the subjective feeling we have of time passing (all it takes is a mirror), and in the time of physicists, there are many subtleties. Things get even more nebulous when we go back to near the origin of the Universe. The word “origin" already says it: it is the moment in time when the Universe as we know it came to be; essentially, when time begins to tick. How that happened remains a mystery, and one that brings a whole lot of conceptual difficulties into the forefront.

There is, then, yet another kind of clock—a universal, or cosmic, clock that marks the origin and evolution of the Universe. It has been ticking for some 13.8 billion years, and considering what we know now of the Universe and its material contents, it seems poised to keep going for as long as we can conceive. However—and to makes things more interesting—just as with the beginning of time, we can say little with certainty about the future, since that depends on knowing the properties of the Universe in the distant future.

Existence, from cosmic to human, is bracketed at both ends by mystery.

The post No Such Thing as “Now" appeared first on ORBITER.