If you were hoping, based on the title, that I was going to describe the time I saw strange lights moving at inexplicable speeds across the sky, then I am about to disappoint you. This column is actually about my experience in the public spotlight talking publicly about the connection between UFOs and extraterrestrial life. It was quite a ride.

On May 30, 2021, I wrote an op-ed in the New York Times titled “I’m a Physicist Who Studies Aliens. U.F.O’s Don’t Impress Me.” I don’t get to write titles for the op-ed pieces that I write for the Times — or most other places for that matter — but, as provocative as it was, I think it captured the essence of my point. As a scientist involved in the search for life and “techno-signatures” on exoplanets, I think a lot about what constitutes a good data set for that search. In other words, what kind of data would allow me to make the extraordinary claim that my colleagues and I have detected life and a civilization on another world?

The answer had better be “some really damn good data.” By that, I mean we would need to take measurements that gave us strong and unambiguous evidence for the conclusion that a particular signal comes from a technologically advanced civilization. My main point in the op-ed was that no matter how intriguing those navy UFO sightings may be — and they are interesting — they don’t provide the extraordinary evidence that we need to conclude that aliens are visiting us. My arguments are in the op-ed if you want to see them. What I want to focus on here is what happened after that argument appeared in the press.

Within an hour or so, my email and Twitter feed began to light up. By the end of the day, I was getting more messages about the piece than almost anything I had ever written before. Some of the messages affirmed the argument I was making. The majority, however, wanted me to know how wrong I was. These fell into two categories.

There was a fair amount of “the-government-knows-but-won’t-tell-us” kind of narrative. Lots of these messages were pretty mean.

Some people wanted me to know that UFOs — or as the government calls them, Unidentified Aerial Phenomena (UAPs) — didn’t need to be connected to aliens for them to be of interest. I had however made this exact point in my piece.

I have no problem with people wanting to have those navy sightings (and others) studied scientifically and openly. My colleagues on the NASA techno-signature grant made this point in an excellent Washington Post op-ed. I think the process of vetting those sightings would greatly help show the public exactly how science works. These days, we have a real problem with science denial, and anything that lets folks understand “what science knows and how it knows it” would be helpful. 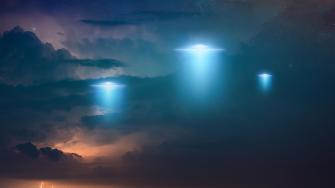 But many folks (on Twitter and elsewhere) held that the connection between UFOs and aliens had already been made. I got floods of links to one video or website after another, the vast majority of which were people describing something they had seen in the sky. As I said in the op-ed, there really isn’t much science you can do with personal testimony. One can’t get accurate measurements of velocity or distance or mass or any of the other basic data that a physicist would need to tell if something really was moving in a way that’s impossible for human technology.

Some folks reached out because they had seen a UFO themselves. I totally understand that these people would want someone to take their reports seriously. I would never tell them that they did not have their experiences. What I can say, however, is that there’s nothing a scientist can do to transform the description of that experience into data that we would need to reach the extraordinary conclusion that they had seen evidence for extraterrestrial life.

The truth is out there

But a significant fraction of what I saw coming across Twitter and elsewhere was just pure vehemence. These folks were absolutely certain that UFOs were alien visitors. There was a fair amount of “the-government-knows-but-won’t-tell-us” kind of narrative. Lots of these messages were pretty mean. I got the sense that, for these folks, no public investigation — no matter how open and transparent — would be satisfying unless it reached the conclusion that they already believed. This, of course, is the opposite of science.

So, it was an interesting week. My brief time in the UFO limelight (I did many interviews on places likeCNN, BBC, etc.) showed me a lot about how people view the question. Since I am so deeply involved with techno-signature science, I felt it was important to try to explain how the science of life and the universe works as a science.

But I don’t really want to spend a whole lot more time in that limelight. It was kind of exhausting, in large part because of the vehemence of the true believers. I will follow whatever happens after the government’s report comes out with interest. But my bet (and every researcher makes a bet when they choose their research topics) is that the data I need to know about life elsewhere in the universe will come from telescopes, not jet fighters.

Tags
extraterrestrial lifeufos
In this article
extraterrestrial lifeufos
Related
Hard Science
UFOs: US intelligence report finds no aliens but plenty of unidentified flying objects
A new government report describes 144 sightings of unidentified aerial phenomena.
Hard Science
False positive: Exoplanets could have lots of oxygen but no life
Oxygen is thought to be a biomarker for extraterrestrial life, but there are at least three different ways that a lifeless planet can produce it.
Life
Less-advanced alien civilizations may be nearby — but we’re not looking for them
Humans are more likely to have “first contact” with an advanced alien civilization, according to a recent NASA-funded paper.
13.8
Can humans travel through wormholes in space?
Two new studies examine ways we could engineer human wormhole travel.
13.8
If we do find alien life, what kind will it be?
Three lines of evidence point to the idea of complex, multicellular alien life being a wild goose chase. But are we clever enough to know?
Up Next
Hard Science
Infectious disease and the bitter Koch-Pasteur vaccine rivalry
The following is an excerpt from Viruses, Pandemics, and Immunity by Arup K. Chakraborty and Andrey S. Shaw. Reprinted with Permission from The MIT PRESS. Copyright 2021.Koch’s Postulates, Anthrax, Tuberculosis, […]