Objects coming into our solar system have an origins story to tell. 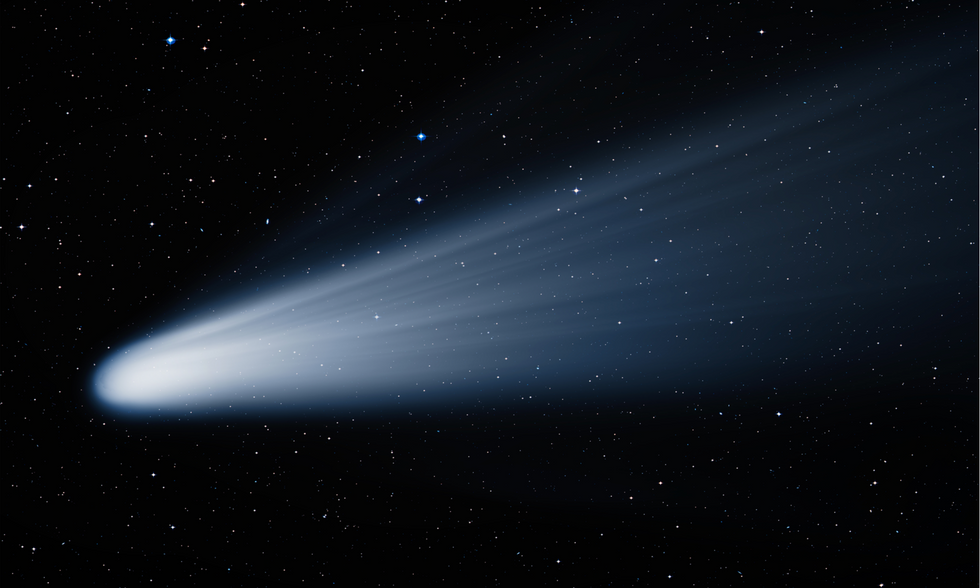 Two years ago, the strange and mystifying Oumuamua, a cigar-shaped rock, was credited as being the first interstellar object to come visit our solar system. In Hawaiian, Oumuamua means “Scout" or “Visitor from Afar Arriving First."

Sighted in October 2017 by astronomers using a large telescope in Hawaii, Oumuamua caused quite a stir, especially after Shmuel Bialy and Avi Loeb from the Harvard Smithsonian Center for Astrophysics wrote a paper speculating that the object could have been an artifact engineered by an alien civilization. When a serious scientist like Loeb, whom I know and respect, writes about alien engineering, we at least pay attention.

It's still not quite clear what Oumuamua is, but the consensus seems to be inclined to call it a rogue comet, escaped from its own originating stellar system and caught by the gravitational web of our own solar system. Its huge relative speed of 57,000 mph, and the absence of a thick tail typical of comets, indicate that its gaseous envelope may have been slowly outstripped, causing it to jet forward, almost like a spaceship that ran out of fuel. Or it could be a rogue asteroid, catapulted from its stellar system and randomly caught by ours. It does fire the imagination, as Adam Frank wrote here. If we can have interstellar visitors, and if life is abundant in the cosmos, could it have rained down from the skies?

And now we have another interstellar visitor, this one a confirmed comet, with fuzzy tail and all.

Interestingly, the object was first spotted by Crimean astronomer Gennady Borisov with a small telescope. Being small, the telescope could be pointed low in the horizon, near the sun, something hard to do with the huge and somewhat unwieldy telescopes used for scientific data collecting and research. In fact, Karen Meech, an astronomer from the University of Hawaii who was involved both with the spotting of Oumuamua and studying the new C/2019 Q4 comet, said the largest telescopes will only be able to train their mirrors to the comet in mid to late October, when it is higher in the sky.

Still, the excitement is justified.

Comets and asteroids are leftover debris from the formation of a star and its orbiting planets and moons. Essentially, the stuff that doesn't fall to the center to become a star or coalesce into a larger world to become a planet, remains in orbit as little chunks of matter.

The essential difference between asteroids and comets is their chemical composition. Asteroids are rocky leftovers, closer to the star. This is the case in our own solar system, with the famous asteroid belt between Mars and Jupiter. The belt actually marks a sort of boundary between the rocky planets within (Mercury, Venus, Earth, Mars), and the gaseous planets without (Jupiter, Saturn, Uranus, Neptune). Comets are on the outside, and are typically balls of dust and frozen gas. Their famous tails are simply the frozen gas in their outer layers being vaporized by the heat of the sun.

As leftover debris from the formation of a star and its planets, asteroids and comets have a story to tell, the story of how their stellar systems formed billions of years ago. They are, quite literally, time machines that transport us to when their central star and neighboring planets formed. If we can read their message and decode their nature, we could, at least imperfectly, reconstruct the many steps that led to the formation of that alien star and its planets. In a sense, this is a sort of paleoastronomy, using remains from another era to reverse engineer the physical and chemical processes that led to its existence.

Learning about other worlds and how they formed will, presumably, inform us about how unique or commonplace our own solar system is. Does this other stellar system have similar chemistry to ours? Does it have not just the basic same chemical elements, but also in the same proportions as we find in our comets and asteroids here? Could there be a special signal, a sort of telltale evidence of, perhaps, chemical processes indicative, if not of life, at least of life-allowing conditions? For example, an abundance of complex organic molecules, similar to what we find in our neighborhood?

Another question concerns one of the big open questions related to life and its origin: Since the times of Louis Pasteur in the 1860s, it has been known that the organic molecules present in living organisms, all of them, have a very particular kind of spatial form.

Look at your two hands and try to superimpose one on top of another. You can't, because they're different. Seen from above, the left hand has the thumb on the right side and vice-versa. This property is called “chirality."

Something similar happens to the organic molecules of living creatures, appropriately called biochirality. Although the molecules could, as our hands, appear with two different spatial shapes, they don't. All of them are “left-handed," as if there were some fundamental architectural principle that selected one handedness over another. When it comes to life's biochemistry, everyone is a lefty—at least on Earth. I worked quite intensely for a few years on this question with my then graduate students Sara Walker and Joel Thorarinson.

What kind of selection principles could exist for this? Is this asymmetry peculiar to Earth's biochemistry? To our solar system? To the whole universe? Finding chiral organic molecules in different celestial bodies, especially if they come from another stellar system, can be extremely useful here. If their chirality is the same as here, it will add to the argument that life, if it exists there, follows similar architectural principles everywhere. Otherwise, it will show that handedness is an accident and can switch around in different stellar systems. My work proposes the latter.

It will be exciting to see what kinds of messages we get from our interstellar visitors in the next few years and how much they will help us figure out the story of our own origins.