Last week, a renowned and highly respected Brazilian journalist emailed me a link to a YouTube video. The video, she said, was about the teachings of Wu Hsin, an obscure Chinese sage that presumably lived about one hundred years after Confucius, some time between 403 and 221 BCE. In a book that collects his writings, translated and edited by Roy Melvyn, Wu Hsin is a teacher of non-dualism, credited with being the bridge between Taoism and Confucianism and what later became Zen Buddhism in China and Japan.

The power of religious faith is not in it being based on established facts but on it being believed and, through the strength of this belief, being effective and inspiring.

My journalist friend urged me to watch the video, especially because “some of the ideas resonate so clearly with yours.” The video, in Portuguese and currently with over 700,000 views, was beautifully edited in black and white, with a narration filled with deep and meaningful teachings attributed to Wu Hsin. I was mesmerized. I ordered the book immediately and started researching this enigmatic figure. In the back of my mind, though, was an uncomfortable feeling. If Wu Hsin is so wise and so historically essential, how come I never heard of him?

The teachings of Wu Hsin

I went back to YouTube to search for videos about Wu Hsin in English. There were quite a few, but none as beautifully edited as the one in Portuguese. Still, between the books and the videos, millions of people are clearly aware of Wu Hsin’s teachings:

The appearance of a separate “I” is an illusion of the mind that divides everything into a subject (the “I”) and an “object” (the world outside of the “I”). This apparent duality, this feeling of being apart from everything else, is the ultimate source of unhappiness.

I asked my 13.8 partner Adam Frank and my friend, the philosopher Evan Thompson — both experts on Eastern religions — about Wu Hsin. “Never heard of him,” said Adam. “Wu Hsin is a fictional character likely invented by Roy Melvyn. No historical evidence of any such person. It’s kind of an ancient Chinese version of Carlos Castañeda’s Don Juan,” said Thompson.

Does it matter if Wu Hsin was real? 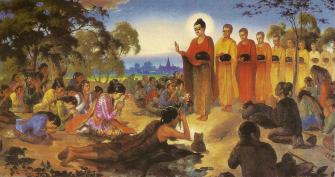 Credit: Hintha via Wikipedia and licensed under CC BY-SA 3.0

I explored a little deeper and discovered some very strange allegations against Roy Melvyn, the man who gave voice to Wu Hsin. There is no Wikipedia entry about Wu Hsin, the Chinese sage. I then found an online discussion platform where people pondered about Wu Hsin and Roy Melvyn. Opinions diverged, with some people stating something that I found fascinating: it doesn’t matter whether Roy Melvyn made Wu Hsin up or not; the teachings are still powerful and useful.

The strange story of Wu Hsin and Roy Melvyn goes to the heart of the debate between literal and nonliteral interpretations of religious texts and figures. To what extent is it necessary to attribute real existence to a religious historical figure to be inspired by his or her teachings? A video with more of Wu Hsin’s teachings (in English) on YouTube makes this clear: “Whether Wu Hsin is fictional or not and those are Roy Melvyn’s writings is none of my concern. I just happen to like them. That’s all there is to it.”

The YouTube channel belongs to an anonymous “Unself yourself.” Could it be another one of Melvyn’s outlets, trying to justify his actions? Who knows? We remain lost in the fog of not knowing, the truth veiled under the anonymity of the web. “Seeking ends when the fish understands the folly of searching for the ocean.”

Will the real Roy Melvyn please stand up?

Maybe Roy Melvyn had something meaningful to say and knew quite well that unless he invented a story connecting his sayings to an obscure ancient sage no one would listen. The fact is that the real Melvyn never came forward with concrete proof of finding any original writings by Wu Hsin. That simple gesture would, of course, solve everything (assuming the documents weren’t forged, but that could be determined by experts).

Although we live in a world where thousands of people believe that mediums can channel wisdom from alien intelligences, the story of Wu Hsin and Roy Melvyn goes much farther. Melvyn is sharing and repackaging inspiring Eastern teachings about finding inner peace through detachment and embracing the impossibility of ever understanding the deepest reaches of reality. “What is known is sustained by the unknown which, in turn, is sustained by the unknowable.”

The power of religious faith is not in it being based on established facts but on it being believed and, through the strength of this belief, being effective and inspiring. I think of Dante’s Divine Comedy and Michelangelo’s David or Moses. If the power of faith redeems so many apocryphal religious narratives, should it redeem Melvyn?

There are different types of atheism and atheists. In general, they can be classified as the non-religious, the non-believers, and agnostics.
Up Next
Hard Science

The helicopter’s sixth mission almost went down in disaster.