Why we must build large particle accelerators. 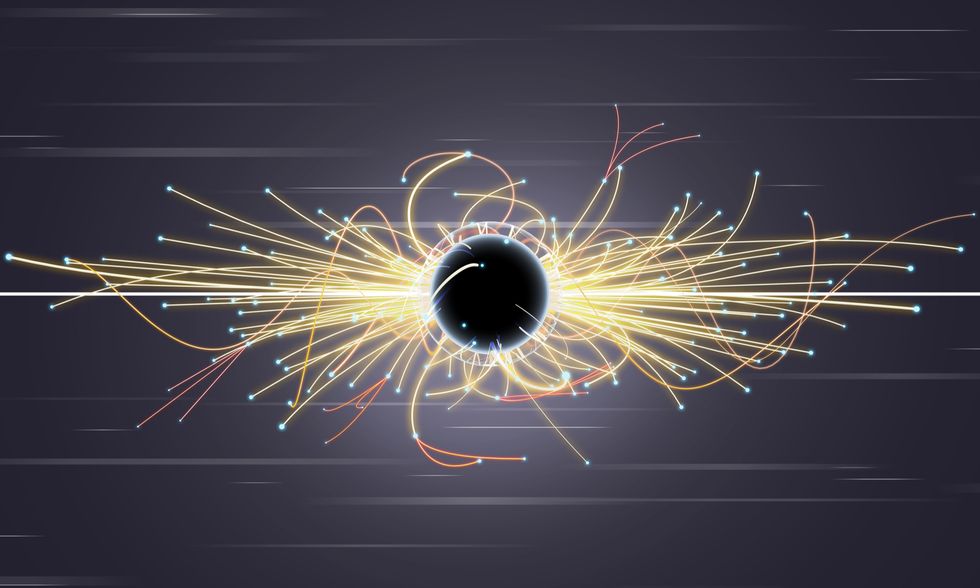 High energy physics has lofty goals and violent methods. Its mission is to discover the fundamental building blocks of matter, the elementary particles that make up everything in the universe, from stars to people.

To pry into the hearts of atoms, physicists build gargantuan machines that smash together tiny chunks of matter. The faster they move, the more violent the collisions, and the more promising the results. The game is to see if anything new comes out. Physicists pore over the remains, hoping to glimpse into new physical realms, to test ideas or, occasionally, discover something unexpected.

The current record-holding particle accelerator is the Large Hadron Collider (LHC), a giant collider at CERN, a laboratory located near Geneva, Switzerland, on the Franco-Swiss border. Thousands of scientists, engineers, technicians, and students from around the world work together with a common purpose: to further humankind's knowledge of the world and to develop new technologies for all. In today's divisive political scene, the LHC is a shining beacon of what we can accomplish as we work together. No other large-scale scientific effort is its equal.

A marvel of engineering, the LHC is the biggest machine ever built: a 16.8-mile (27km) circular tunnel buried 330 feet underground, where particles move close to the speed of light. Along its length, there are four different detectors that track the results of the collisions. In 2012, the LHC discovered the Higgs boson, a particle that had been predicted in the 1960s. It's the crown jewel of the so-called Standard Model of particle physics, a model that brings together all we currently know about the fundamental building blocks of matter. But we didn't know its mass; and we still don't know whether the Higgs is made out of even smaller particles.

The question now is what comes next. The LHC is getting an upgrade that will bring its efficiency up by a factor of five to ten, starting in 2026. But physicists are looking beyond, planning a much bigger machine, capable of reaching energies five times higher than the LHC. The new machine, the Future Circular Collider (FCC), comes with a high price tag—anywhere between US $10 and $20 billion. In comparison, the LHC cost US $5 billion and has an annual operating budget of about $1 billion.

Such high costs always prompt criticism. Recently, theoretical physicist Sabine Hossenfelder, a research fellow at the Frankfurt Institute for Advanced Studies in Germany, published an op-ed in The New York Times, criticizing plans to build the FCC. I interviewed Hossenfelder here last year, when she published her book 0, a critique of the direction high energy physics has taken in the past decades.

In her op-ed, Hossenfelder argued that with no guarantee of new physics lurking at the energies the FCC could probe, the money would be better spent in other, less costly, particle physics or astrophysical research initiatives. Like most of our colleagues, she was disappointed that the LHC didn't discover other kinds of particles: many expected to find hints of supersymmetry, a new, hypothetical principle that would double the number of fundamental particles, or even extra spatial dimensions and mini black holes—no doubt highly speculative ideas.

The nature of 85 percent of the matter in the universe remains unknown to us. We call this dark matter, and hopes were high that finding supersymmetry at the LHC would resolve this question. Alas, it was not meant to be. Theory may guide the design of experiments but Nature always has the final word.

Pushing back against defeatism

We understand Hossenfelder's critique and share some of her disappointments and concerns. However, we disagree with her fundamental premise, based on “an either this or that" kind of argument, which goes something like this: The FCC is too expensive and would thus siphon funds from other physics projects, so, let's can it.

This sort of reasoning is defeatist. As a community, we must fight united for the expansion of all our fields of inquiry, working with the public and politicians to increase the research budget to accommodate different kinds of projects. While it is true that research budgets are often strained, our work is to convince society that what we do is worthwhile, even when it fails to deliver the big headlines.

Meanwhile, the American government has revealed plans to update its fleet of B-1 and B-2 bombers with 100 new, nuclear-capable, B-21 Raider bombers by the mid 2020s. The price tag is almost US $100 billion, roughly $1 billion per plane.

We believe that the fundamental question here is not whether a new accelerator is too costly, but how governments decide to invest the larger portions of their budgets: machines of war or machines of discovery?

There are no promises or guarantees of success in fundamental research. When Galileo pointed his telescope to the sky in 1609, he wasn't sure what he would see. There wasn't a firm “prediction" that the Earth was merely a planet orbiting the Sun; Copernicus had offered vague arguments, more aesthetical than physical. But using his new tool of discovery, Galileo amassed strong evidence that the Earth was indeed a planet; and discovered, unexpectedly, that Jupiter had moons, that Saturn had a ring (“ears," he wrote), and that the Sun had spots.

Likewise, much of quantum physics emerged from unexpected laboratory results in the late 1800s that forced a profound rethinking of how Nature works. No one predicted the discrete electron orbits in atoms or the property of spin. Hossenfelder is correct that “big science experiments are investment in our future." Indeed, history has shown us countless times that investments are worth making even without guarantees of success.

Of course, we must learn from our results, and this we have been doing with the many fruitless searches coming from the LHC. Science is not based on certainty but on ignorance. We can't be sure whether there is new physics lurking beyond the LHC capabilities, but we will only find out if we look.

This is a time for the physics community to work together toward new ambitious goals and not to sabotage the work of thousands of dedicated colleagues. We should work together to increase the size of the research budget and not fight with each other about how we can share what governments allocate to us.

The post Expecting the Unexpected appeared first on ORBITER.