To Einstein, the world was ultimately rational. Things had to make sense. They should be quantifiable and expressible through a logical chain of cause-and-effect interactions, from what we experience in our everyday lives all the way to the depths of reality. To Bohr, we had no right to expect any such order or rationality. Nature, at its deepest level, need not follow any of our expectations of well-behaved determinism. Things could be weird and non-deterministic, so long as they became more like what we expect when we traveled from the world of atoms to our world of trees, frogs, and cars. Bohr divided the world into two realms, the familiar classical world, and the unfamiliar quantum world. They should be complementary to one another but with very different properties.

The two scientists spent decades arguing about the impact of quantum physics on the nature of reality. Each had groups of physicists as followers, all of them giants of their own. Einstein’s group of quantum weirdness deniers included quantum physics pioneers Max Planck, Louis de Broglie, and Erwin Schrödinger, while Bohr’s group had Werner Heisenberg (of uncertainty principle fame), Max Born, Wolfgang Pauli, and Paul Dirac.

Almost a century afterward, the debate rages on.

Two books — one authored by Sean Carroll and published last fall and another published very recently and authored by Carlo Rovelli — perfectly illustrate how current leading physicists still cannot come to terms with the nature of quantum reality. The opposing positions still echo, albeit with many modern twists and experimental updates, the original Einstein-Bohr debate.

Einstein believed that quantum theory, as it stood in the 1930s and 1940s, was an incomplete description of the world of the very small. There had to be an underlying level of reality, still unknown to us, that made sense of all its weirdness. De Broglie and, later, David Bohm, proposed an extension of the quantum theory known as hidden variable theory that tried to fill in the gap. It was a brilliant attempt to appease the urge Einstein and his followers had for an orderly natural world, predictable and reasonable. The price — and every attempt to deal with the problem of figuring out quantum theory has a price tag — was that the entire universe had to participate in determining the behavior of every single electron and all other quantum particles, implicating the existence of a strange cosmic order.

Later, in the 1960s, physicist John Bell proved a theorem that put such ideas to the test. A series of remarkable experiments starting in the 1970s and still ongoing have essentially disproved the de Broglie-Bohm hypothesis, at least if we restrict their ideas to what one would call “reasonable,” that is, theories that have local interactions and causes. Omnipresence — what physicists call nonlocality — is a hard pill to swallow in physics. 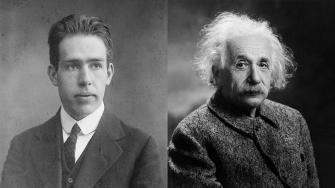 Yet, the quantum phenomenon of superposition insists on keeping things weird. Here’s one way to picture quantum superposition. In a kind of psychedelic dream state, imagine that you had a magical walk-in closet filled with identical shirts, the only difference between them being their color. What’s magical about this closet? Well, as you enter this closet, you split into identical copies of yourself, each wearing a shirt of a different color. There is a you wearing a blue shirt, another a red, another a white, etc., all happily coexisting. But as soon as you step out of the closet or someone or something opens the door, only one you emerges, wearing a single shirt. Inside the closet, you are in a superposition state with your other selves. But in the “real” world, the one where others see you, only one copy of you exists, wearing a single shirt. The question is whether the inside superposition of the many yous is as real as the one you that emerges outside.

To Einstein, the world was ultimately rational… To Bohr, we had no right to expect any such order or rationality.

The (modern version of the) Einstein team would say yes. The equations of quantum physics must be taken as the real description of what’s going on, and if they predict superposition, so be it. The so-called wave function that describes this superposition is an essential part of physical reality. This point is most dramatically exposed by the many-worlds interpretation of quantum physics, espoused in Carroll’s book. For this interpretation, reality is even weirder: the closet has many doors, each to a different universe. Once you step out, all of your copies step out together, each into a parallel universe. So, if I happen to see you wearing a blue shirt in this universe, in another, I’ll see you wearing a red one. The price tag for the many-worlds interpretation is to accept the existence of an uncountable number of non-communicating parallel universes that enact all possibilities from a superstition state. In a parallel universe, there was no COVID-19 pandemic. Not too comforting.

Bohm’s team would say take things as they are. If you stepped out of the closet and someone saw you wearing a shirt of a given color, then this is the one. Period. The weirdness of your many superposing selves remains hidden in the quantum closet. Rovelli defends his version of this worldview, called relational interpretation, in which events are defined by the interactions between the objects involved, be them observers or not. In this example, the color of your shirt is the property at stake, and when I see it, I am entangled with this specific shirt of yours. It could have been another color, but it wasn’t. As Rovelli puts it, “Entanglement… is the manifestation of one object to another, in the course of an interaction, in which the properties of the objects become actual.” The price to pay here is to give up the hope of ever truly understanding what goes on in the quantum world. What we measure is what we get and all we can say about it.

What should we believe?

Both Carroll and Rovelli are master expositors of science to the general public, with Rovelli being the more lyrical of the pair.

There is no resolution to be expected, of course. I, for one, am more inclined to Bohr’s worldview and thus to Rovelli’s, although the interpretation I am most sympathetic to, called QBism, is not properly explained in either book. It is much closer in spirit to Rovelli’s, in that relations are essential, but it places the observer on center stage, given that information is what matters in the end. (Although, as Rovelli acknowledges, information is a loaded word.)

We create theories as maps for us human observers to make sense of reality. But in the excitement of research, we tend to forget the simple fact that theories and models are not nature but our representations of nature. Unless we nurture hopes that our theories are really how the world is (the Einstein camp) and not how we humans describe it (the Bohr camp), why should we expect much more than this?

Tags
philosophyquantum mechanics
In this article
philosophyquantum mechanics
Related
Thinking
6 great philosophers and how they used their political power
Most philosophers merely contemplate the world, but what about the ones who actually tried to change it?
Thinking
Finding your essential self: the ancient philosophy of Zhuangzi explained
Adopting a healthy scepticism towards inherited ideas means “emptying the container of the Self.”
Thinking
Why you should laugh at yourself, according to Seneca and Nietzsche
“It is more human to laugh at life than to lament it.”
13.8
Why the origin of life and the Universe itself might be forever unknowable
There might be a hard limit to our knowledge of the Universe.
Thinking
Bonhoeffer’s “theory of stupidity”: We have more to fear from stupid people than evil ones
Evil is easy to identify and fight against; not so with stupidity.
Up Next
Health & Wellness
Need to take your time back? Try these four open-thinking strategies.
Everyone has pondered what they would do with an extra hour a day. Would they get more sleep or spend more time with family? Spend time on a side project […]